Gems in the mist

Yesterday afternoon and evening, my brother and his family came to visit. Ostensibly, they were visiting us humans but I think that S was the real draw. They raised S from a puppy until he became a mountain dog a few years ago. Yesterday, they brought him fancy treats and generally spoiled him rotten. S rose to the occasion and seemed physically much stronger compared to recent days. I think that seeing his first family gives him a surge of happy energy. He's a lucky dog - he has a large family who loves him.

R, in his exuberant puppy way, hasn't mastered the art of calmly greeting visitors. Because we live in the mountains, we don't get many people coming to the door for us to 'practice' his greetings. Yesterday, I tried something new, a treat-delivering device called a MannersMinder, to keep him in a down-stay during the initial arrival phase. When visitors walk through our door, he tends to become a turbo-charged rabble-rouser. I loaded it with kibble, and when our family arrived, I asked R to lie down. As long as he stayed lying down, I hit a remote control to release a treat for him. This device mesmerizes R as you can see in the photo below (it distracts him so much that it makes cutting his nails a snap!). K also partakes in the treats but isn't as obsessed as R is. S isn't interested but looks dapper in his reflective vest and boots! 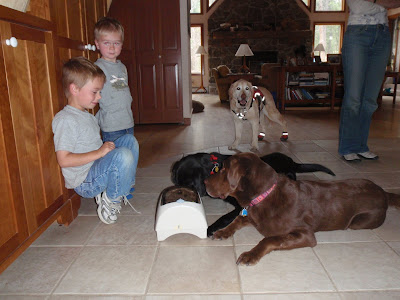 As we had fun and relaxed, I suddenly noticed hives distorting K's face. I searched for ticks, which have caused a severe allergic reaction before, and found none. Meanwhile, her eyelids puffed up and more hives were born. So, I gave her some Benadryl and watched closely. Fortunately, the reaction went no further yesterday evening. However, she vomited early this morning (typical during an allergic reaction for her) and I saw that the hives had swelled again. More Benadryl. By breakfast time, she looked like a reasonable facsimile of her beautiful self aside from puffy eyes (see photo below) but we're keeping a close watch after her full-on allergic reaction to a tick bite a couple of weeks ago. 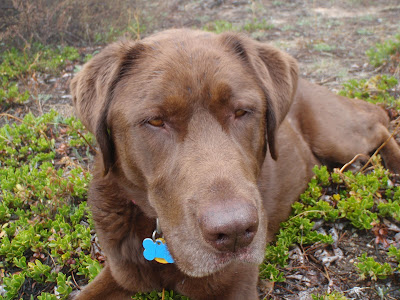 The morning dawned 30 degrees and raining. The rain slowed while I ate breakfast so I rolled out into the murky world. K insisted on coming with me so I made a rule for myself that we couldn't go far from home (for a fast return if needed) and I'd check her face closely every ten minutes. Her hives shrunk during the ride so I gradually relaxed.

The sky powdered our woods with snow overnight. The white layer, stuck to the juniper shrubs, glowed through the fog. On average, we get measurable snowfall every month except July and August here at 8200' in the Front Range. So, May snow isn't a shock to us or to the natural world. 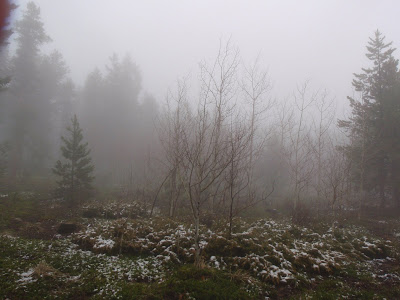 But, as K and I rolled along through the snow and fog, I noticed newborn tiny pink blossoms on the kinnikinnik, a dramatic contrast to the world around us. Kinnikinnik softly carpets much of our forest floor with smooth green leaves. After bees pollinate the flowers, they become red berries. These red splashes of color remain for most of the year. The berries must not taste sweet because the animals don't demolish them like wild raspberries or strawberries. 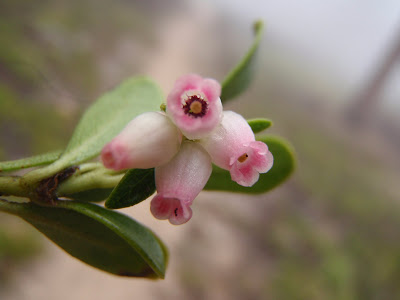 After I dropped off K, I headed out for more mountain bike time in the surreal forest. As I rolled past our bird feeders, a hawk flew ahead of me, abandoning his post above the completely deserted feeders. He flew low, maneuvering around dense pine trees and disappearing into the mist. We think that he's either a Northern Harrier or a Cooper's Hawk who has decided that our feeders are a great hunting site.

We once watched a Cooper's Hawk snag a flying Stellar's Jay just outside our window. The hawk didn't outweigh the Jay by much and a mighty struggle ensued. I had to restrain myself from scaring away the hawk so that the Jay could escape. As we watched, other Stellar's Jays courageously dive-bombed the scary hawk who was on the ground trying to subdue his prey. Ultimately, the struggling Jay escaped. Despite that outcome, our guess was that the Jay wouldn't survive. After all, the hawk had razor sharp talons that he'd been using to grasp, and likely cut, the Jay. However, the courage of the other Jays in defending their struggling flockmate gave me a tinge of respect for the Jays, despite their nasty habit of killing songbird nestlings.

After seeing the hawk fly ahead of me on the trail today, I rode hard through the phantom forest, unable to see much except rough shapes of trees and shrubs. I stayed away from sensitive trails because of the mud. Amazingly, I saw a number of other mountain bikers out. Two of them were working hard on trail maintenance, removing downed trees from the trails and digging drainage channels to prevent erosion. Our neighborhood has a cadre of responsible bikers who work hard to keep the trails in good shape. Since my back prevents me from doing heavy work like sawing, lifting trees, or digging ditches, I thank these hard-working neighbors! I try to do the small stuff, like picking up trash and moving small obstacles from the trails.

Near the end of my ride, iceballs and then actual snow pelted me. 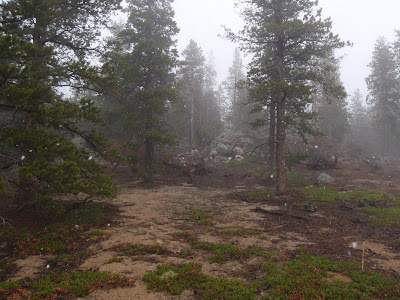 Because I was in the forest, the trees protected me from the full brunt of the aerial assault. Soon after the squall passed, I took a photo because I believed that the sun had broken through. It's relative, I guess, because the photo looks as dark and foreboding as all the others from today (so I didn't include it). But, I did spot two pretty flowers, an 'Early Larkspur' which looked a bit frayed by the weather. Perhaps she opened her petals too early this year. 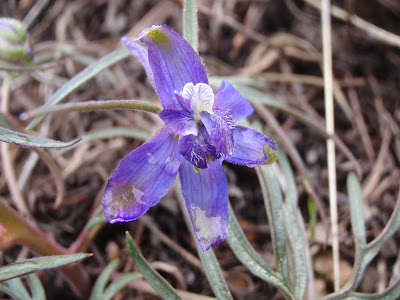 And then I noticed a dandelion that had closed down its inner petals to protect her sensitive parts from the cold. I'm not exactly sure why only the central part is closed down because I thought that a dandelion was made up of many identical tiny ray flowers, as I learned from the Watcher's Blog. This photo makes it look like the center of the flower differs from the outer ray flowers. 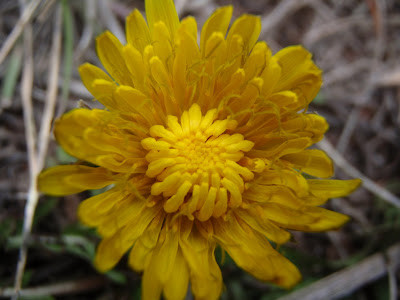 It's amazing how many small beautiful things live in our forests. It's worth looking carefully for the gems hidden in the mist.
Posted by KB at 5:30 PM