Following in the tracks of a bear

Today, my goal was to expand our current repertoire of trails. Snow from our recent huge storm had closed many of my regular haunts. My first exploration, with K, was definitely a success. We rode our favorite trail that's etched into a west-facing slope. A perfect amount of snow remained. There was little enough snow that I could ride the whole trail but nice cool patches remained for K to joyfully do her 'snow roll'. 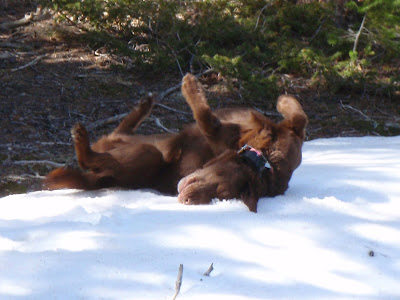 I love this trail partly because of the omnipresent views of the snowy mountains. 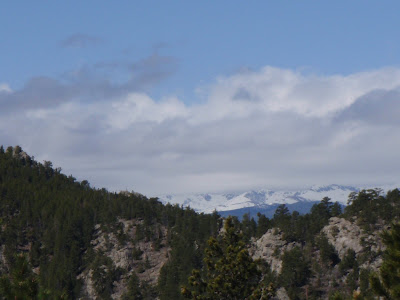 As we headed down from our favorite trail, we spotted an aspen grove with newly born leaves. 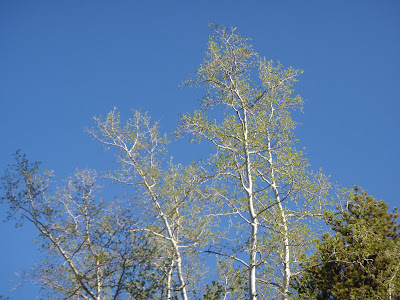 Some leaves had barely unfurled while others had opened up to soak up the sun. The newly unfurled ones appeared to have burst from the same buds that recently had catkins hanging from them. The infant green leaves are a welcome sight! 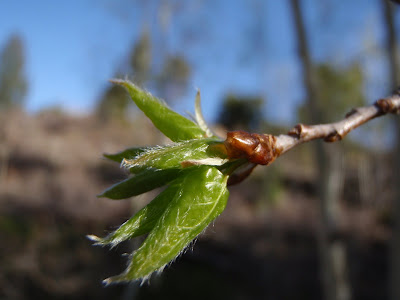 After dropping off K, I headed over a ridge to the east. The ridge blocked the cold wind from the west that had chilled me earlier, and the air suddenly felt summer-like. A sand lily, which will bloom on the west side of the ridge soon, had opened its petals to the sky. 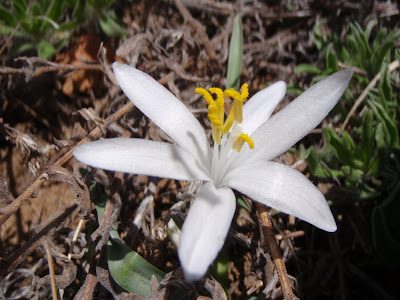 The exciting part of the ride involved heading toward home. After dropping off a ridge to a narrow trail that traverses a steep hillside, I discovered that a multitude of trees had fallen onto the trail in our recent blizzard. By a 'multitude', I mean that in the course of a mile, I didn't ride my bike at all. I walked from one tree to the next and clambered over, under, or around it while carrying my bike. That mile must've taken an hour to cover. Below, a photo shows just one example of a tree problem. In this case, going around the tree involved a precarious escapade because a slick and steep rockface fell away to my right. 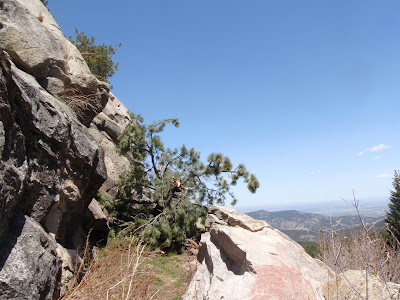 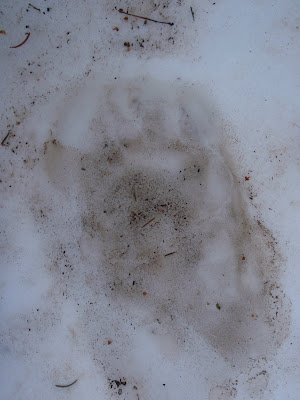 For a while, I followed bear tracks. Bears love this trail. I see their tracks and scat here regularly. This poor guy had as many problems as I did as he tried to get past huge fallen trees. While he stuck with the trail, I simply followed his tracks because he clearly knew the easiest way around obstacles. He deftly found narrow paths past trees. His tracks were most obvious where the snow persisted. In the track to the right, you can make out the toes, the most obvious bear-like feature at a glance. The tracks also had claw marks that don't show up in this photo.

The bear didn't have to deal with the problem of hauling a bike along with him. At one point, my bike became so entangled in branches that I felt certain that I was going to be forced to leave it there, and come back later with a saw to extricate it. Fortunately, that extreme measure wasn't necessary. 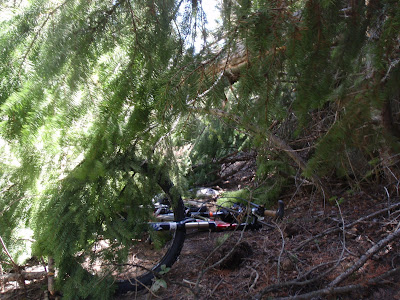 It seemed ironic that I've had bears on my mind and then saw tracks today. After his tracks diverged from the trail, I wondered how the bear would negotiate each obstacle that I ran into. I tried to use the wisdom of a bear - but I definitely don't have that wisdom as you can see from my stuck bike in the photo above.
Posted by KB at 5:50 PM