This morning, I pedaled purposefully up steep rocky trails to a gorgeous view with the deepening green aspen leaves, a new coat of snow on the mountains, and a clear blue sky. I stopped and hugged K, my inspiration to hurry out the door many mornings. 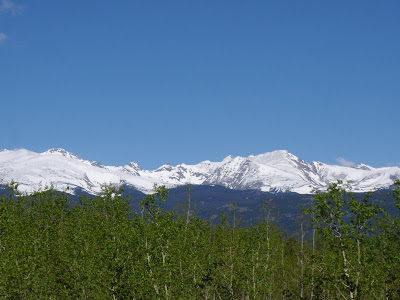 Shortly after our visit to Hug Hill, we rolled past the bear-plundered stump that I wrote about yesterday. The animal scene had transformed. A new, larger, and aggressive species of ant had attacked the orange ants who'd been trying to salvage their nest and larvae yesterday. The large brown ants swarmed over the area, covering almost every square inch of the stump and the forest floor surrounding it. Some orange ants valiantly defended their nest. However, when a big brown ant honed in on an orange one, the fight lasted only seconds. Then, the brown ants carried the dead orange ants away.

An hour later, when I passed the stump again, the brown ants had vanquished the orange ants. Now, I understand why the orange ants worked so feverishly yesterday trying to hide away their larvae and burrow a nest further under the stump. Maybe their furious efforts saved part of the colony.

Early this morning, as I watched the ants and snapped a few photos, K took care of her self-appointed job of covering my back. Later in this ride, when K wasn't with me, I had an animal pass close behind me, demonstrating how valuable her protection is. 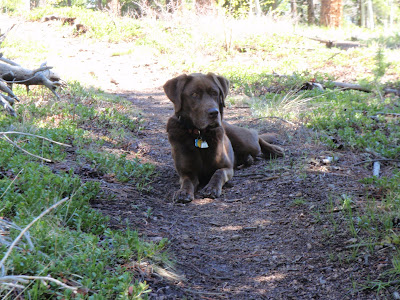 After I dropped off K, I rolled through a meadow and spotted a Yellow-Bellied Marmot sunning himself on a boulder. As I watched, a second marmot climbed from below the rocks to lie on an adjacent boulder. Marmots are huge rodents, up to 11 lbs in weight, who live in rock outcroppings. They dig extensive dens under the rocks and spend 80% of their lives underground. Much of that subterranean time is during hibernation which comprises about 60% of the year. Our elevation is about as low as marmots live. They prefer eking out an existence in the tough conditions of the alpine tundra. On the tundra, they seem to line the trails, whistling shrilly and standing tall to look at passing hikers. Today, they lazed in the sun, unconcerned with the mountain biker photographing them. 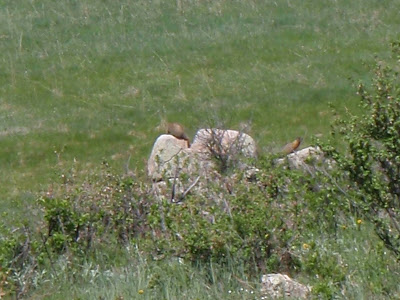 After passing the marmots, I crossed a stream that's running faster and deeper than I've ever seen it and then climbed up to a favorite ridge. New wildflowers caught my eye, and I carefully scanned the area for bears or other animals before photographing them. I haven't been able to identify the first yellow flower that I photographed but my current best guess is a Bladderpod. 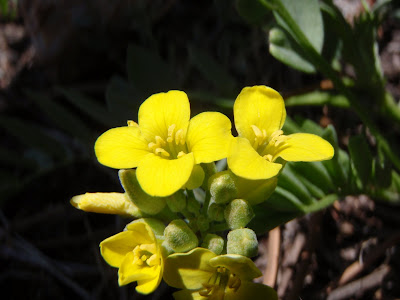 The leaves and buds of the Leafy Cinquefoil (Drymocallis fissa) covered the meadow next to the trail, and I spotted one flower that had dared to open. Later, these yellow flowers will cover our meadows, making a beautiful golden carpet. 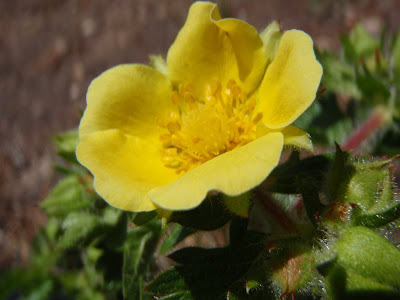 As I photographed the cinquefoil in the transition zone between a meadow and a dense forest, a brownish form moved in my peripheral vision. I startled, jumped up, and saw a powerful cat 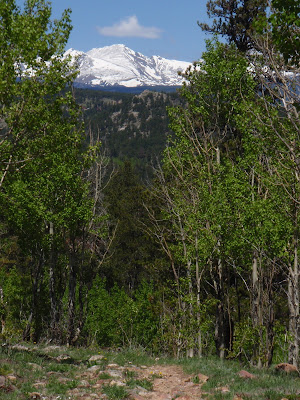 saunter across the trail about 15 yards away. Having been so absorbed in the flowers, my first reaction was a jolt of terror, until I did a quick inventory of his smallish size, mottled body color, and short tail. I realized, with a flood of relief, that he was a bobcat and not a mountain lion.

Despite that conclusion, he still scared me more than I would've expected. Up close, I could see his carnivorous face, with long whiskers and powerful jaws. His body rippled with muscle, like a coiled spring ready to take-off. Based on his heavily muscled hind legs, I wouldn't be surprised if he were capable of jumping 10 ft into the air. But, as he passed me, the bobcat moved with the pride of an animal who believed that he owned the wilderness. He even twitched his short tail like lions do while hunting, showing a flick of white from its underside and then black from its topside. Sadly, my camera was set on 'macro' mode for close-up photos when he surprised me so I have no photos, except of the empty landscape that he'd traversed.

As I rode along the ridge after the bobcat spooked me, I realized that a lion could easily stalk me while I'm absorbed in flowers or other small things like ants. After all, a bobcat walked within 15 yards of me before I noticed him, and he didn't look like he was trying to be sneaky. I think that I'll save my closeup photography for when K is guarding my back.

I pedaled home with an extra keen eye scanning the territory in front of me but, alas, my bobcat had truly vanished. It's amazing to me that such a ferocious and wild animal still flourishes in the remaining wilderness, moving mostly invisibly through our world. I feel lucky to have seen this cat in his true habitat - the wilderness. 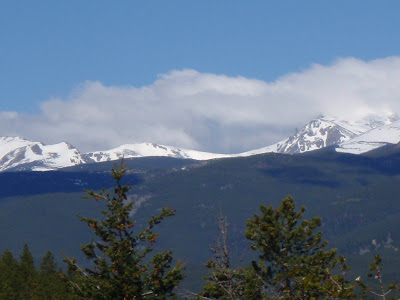