I woke up feeling truly blue today - I almost felt like my limbs were lead-filled. Last night, for the first time, S couldn't haul himself to his feet after lying on his bed. We put his special Ruffwear harness on him and helped him up. He was shaky on his feet but walked on his own. He's moving better this morning but the episode left no doubt in my mind that the invading cells are marching forward unimpeded. I saw my close friend on the trail this morning and told her about it. We shared a hug and tears because we know what it means.

On top of that, I received a 'routine' letter from my doctor reporting blood test results. My doctor had failed to notice on my report that my neutrofil level was about 60 while normal is in the thousands. That's a life-threatening situation that calls for immediate hospitalization because the immune system cannot fight off bacterial infections. For the first time ever, I phoned my doctor at home on a Friday night, and he was truly alarmed. After a tense couple of hours, his investigations revealed that the lab had messed up the test, and the lab tech said that we should ignore the result. I'll be retested on Monday but in all likelihood, I'm OK. This tense episode, in addition to waiting for test results to find out why my brain/vision went wacko last week, watching S go downhill, and having my mother-in-law in dire straits, spiked my adrenaline levels into outer space and then left me utterly washed out. Surprise, surprise - despite feeling depleted of every last ounce of energy, I didn't sleep much last night.

So, I woke up lower than blue. But, almost immediately, R made me laugh - I honestly don't know how I'd survive without dogs in my life. R wanted to get around our bed at light speed and decided that the fastest route was to go under it. I captured his belly crawl on camera. And, yes, the photo also shows that I need vacuum under the bed sometime soon! 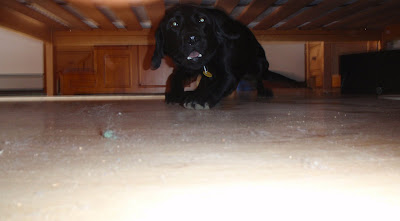 I had the honor of two canines with me on my bike ride. As we started out, I could hear the tenseness in my voice as I called them or talked to them. But, as we settled into a steady pace, I could feel my soul start to break free of its burdens. I simply love riding along with dog tails leading the way. The photo below is an almost constant view when I ride with K and R. 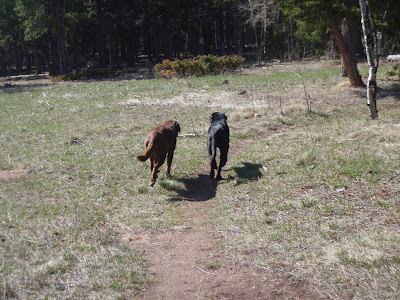 K meandered off to investigate a scent in the meadow, and she used her flapping ears to help with propulsion when I called her. 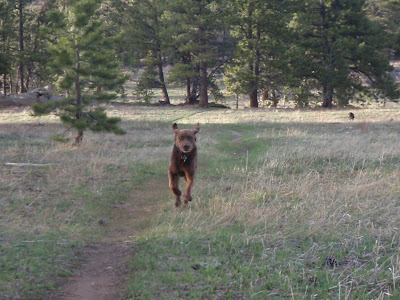 We visited a completely new view point today after I glimpsed an awe-inspiring view of clouds and mountains through the forest. I rode cross-country, dodging downed trees and branches, and was rewarded with a gorgeous view. 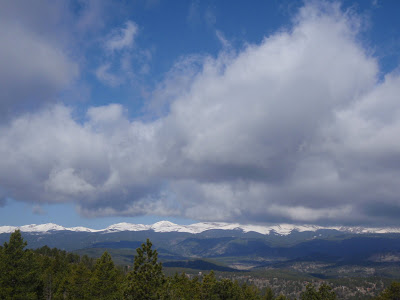 I snapped a quick photo and then corralled the dogs who seemed wired over something that I couldn't perceive. Then, I noticed a scratched out pit under a pine tree, obviously made by one of the largest animals in our ecosystem. It was about 3 ft long and went as deep as some thick roots. It didn't have 'thrown dirt' like a dog digging but rather seemed neatly scratched out.

Because we were smack in the middle of the route where the lion has left tracks on multiple occasions, I immediately became wary, glancing over my shoulder, up in the trees, and to both sides. Lions leave 'scrapings' around their territory as a way to communicate to other lions that they own the area. I've never seen a photo of a scraping but my best guess was that I was looking at one. I fruitlessly tried to find more evidence like fur caught on branches, scat, or a track. 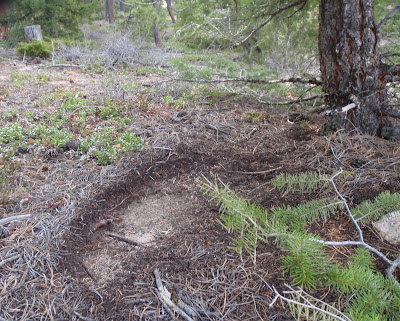 Some people commented that they'd be nervous being in the tracks of a bear like I did yesterday but lions scare me far more than bears. I've never had a bear act aggressively toward me. They simply turn tail and crash off through the dense forest. Or, in my one prolonged bear encounter, the bear seemed to be studying me like a museum specimen but ultimately fled. At this time of year, if I see an adult bear, I immediately look for cubs because youngsters would change the equation. I've never had the misfortune of coming between a mom and her cubs - that might be scary. I'm much less afraid of bears than of lions. In case of a bad encounter with either one, I carry a large, 'Grizzly bear' canister of pepper spray that sprays 30 ft.

Despite the nervous moment in lion territory, my ride with the two dogs had soothed my soul. I dropped them off at home and did a summer-only ride that involved only about 50 yards on roads! I rode along a ridgetop, and a bright yellow wildflower captured my attention so completely that I almost crashed into a tree. I think that it's called 'Golden Smoke', and it inhabits dry, sunny, and disturbed areas. It's bright yellow petals and intricately divided leaves are a beautiful sight just a couple of weeks after getting 4 1/2 feet of snow! 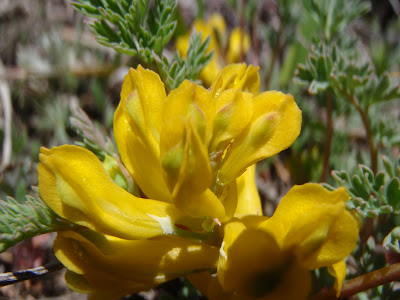 I hammered along the ridgetop, trying to forget all the sad and scary things that have been dominating my days and nights lately. I briefly fell into my cycling and nature trance - a state of hard breathing while scanning my beautiful surroundings. During that trance today, the view that dominated was of a narrow singletrack trail with snowy mountains on the horizon. It's wonderful to escape, even if only briefly. 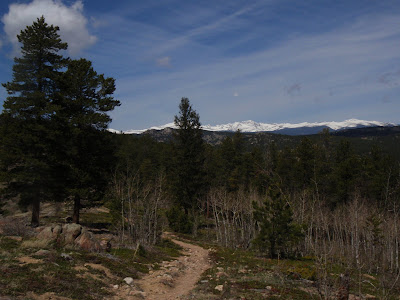