The snowy carpet is receding, exposing more dirt every day. K and I rolled out into a day that smelled like spring. The wet dirt pervaded my senses, and I could see many green sprouts pushing their heads through the dirt. The amazing thing is that, this year, I think that I can identify many of these tiny sprouts when their first leaves unfurl. I love knowing our forest so well.

K and I climbed up to the highest point on our trail network for the first time since mid-March. A few snowbanks remained but the trail into the sky was mostly dirt. A moist and psychedelically colored stump caught my eye - snow doubtless submerged it until very recently. 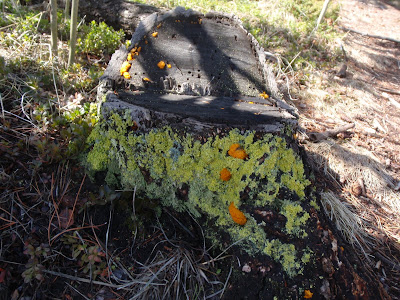 I'm pretty sure that the yellow stuff is a lichen but I don't know what the orange slimy stuff is, and I've never noticed it before. It looks glistening wet with grooves - almost like a neon orange brain. 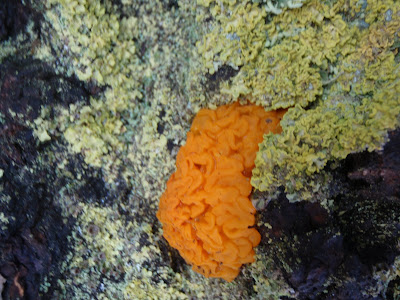 Part of why I noted it is that several dogs that live a mile or so from us have recently been poisoned. No one knows what toxin is the culprit, or even whether it's a natural toxin or the work of an evil person. As far as I know, all of the dogs have survived. In light of a possible natural toxin being the culprit, this bright orange mold-like stuff caught my eye. For some reason, it looks poisonous to me. For once, K showed some good sense and wasn't interested in it. Does anyone know what this orange stuff is?

We reached the top and the awe-inspiring beauty astonished me, yet again. 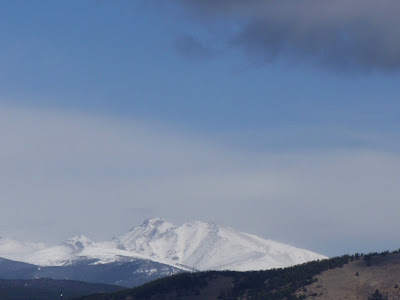 I had to capture K's lovable image while we stood atop our slice of the world. If you look closely at her photo, you can see pink splotches on her upper lip, just below her nose. I don't know what's causing these splotches that appeared about a month ago and aren't getting worse. My vet didn't seem concerned when I described them over the phone. Any ideas? 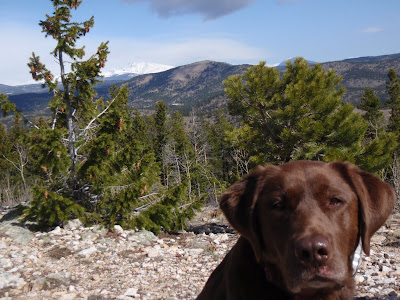 After dropping off K, I headed out for a fairly fast ride but a couple of birds caught my interest. A Western Bluebird flitted around me, flying short distances from one perch to the next. I usually spot Western Bluebirds once or twice over the entire summer because they prefer lower elevations yet I've already seen them several times this summer. I hope that global weirding isn't changing their nesting habits. 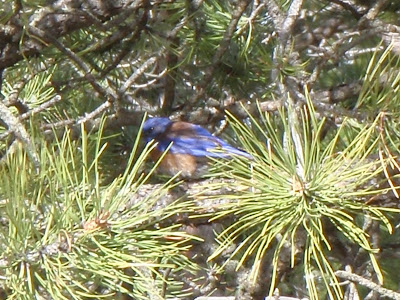 Next, I passed a nestbox where I saw Mountain Bluebirds and Tree Swallows jousting recently. When the weather turned cold and wet, the swallows fled, presumably to the warmth of lower elevations. At that point, the bluebird pair acted like they owned the box. Today, a single pair of tree swallows busily worked at the box entrance. Their emerald backs glinted in the strong sun. What gorgeous birds! 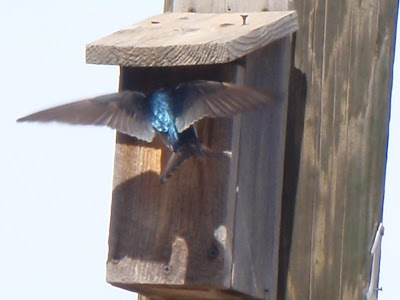 When I arrived home, S awaited me, wanting a trip outside. We lingered in the sunshine, and I stroked his warm fur. Male hummingbirds trilled past us and a golden-mantled ground squirrel trustingly sat on a rock watching us. S's hind end seems shakier today. It's just a small decrement - but each one worries me. So, I sat with him, enjoying being with him on a fresh spring day. The photo below highlights one of my favorite parts of his face - his blond eyelashes! 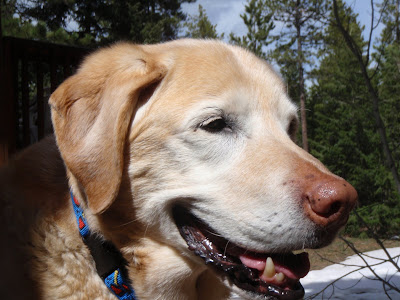