After a quiet night of no obvious wildlife visits, I opened my eyes to what appeared to be a warm, sunny, and bright spring day. I spotted a blooming arnica Indeed, for the first half hour of my mountain bike ride with K, it remained spring, with gorgeous views of the mountains. We emerged from the aspens onto Hug Hill and stared at the snowy mountains. 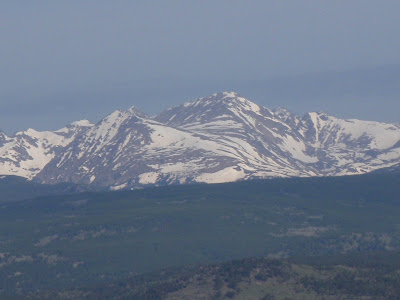 But then, I looked to the east. The good news was that ominous wall of clouds obliterated the view of the city. However, gray clouds oozed up the canyons toward us, giving me the first inkling of imminent change. 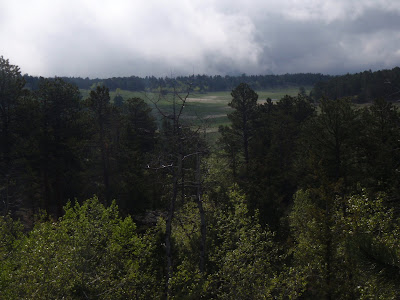 As we rode through a dark and moist pine forest, patches of green moss stood out in the forest mosaic. As I looked at it, I noticed, for the first time ever, that each patch of moss had a 1-2 inch tall stalk protruding from it. The fuzzy stalks had a pair of base leaves and it looked like the main stalks were starting to divide into two leaves at their apexes. I don't know much about moss anatomy so I need to research this one but it sure looked cool. Can anyone lend any information about the stalks? 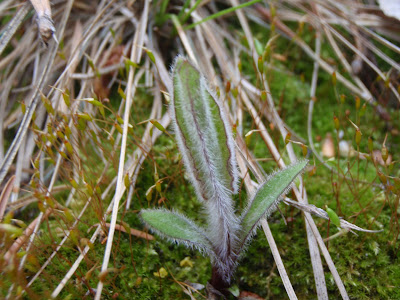 When I crouch down to examine something, K has independently decided that she must sit directly behind me and guard me. It's probably a good idea, especially given that we saw a lion track a short time later. Here, she's falling asleep with boredom, watching her crazy human endlessly study the forest floor. 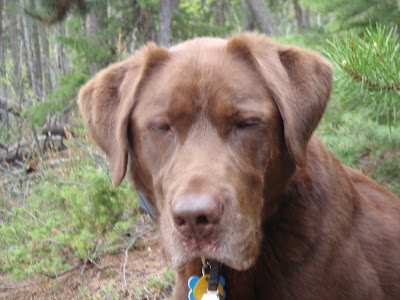 A short while later, her demeanor transformed - she no longer acted like a bored security guard. Her hackles rose and she frenetically sniffed an invisible trail leading up a boulder-strewn hillside. At about the same time, I spotted a track in the sand, huge and imposing, very close to where I found lion scat this winter. The paw was as wide as it was long (3.75"). My photo is useless - I don't know how to make a sand track show up. But, here's the terrain where the lion roamed. We didn't stay long - K's anxiety led me to believe that the lion had traveled this path recently. 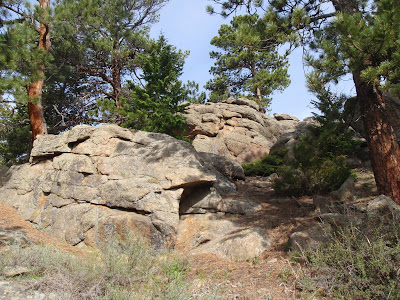 After cautiously departing the lion's terrain (we hoped), we came out a viewpoint, and the clouds had engulfed the Divide. This view includes the same peak, although from a new vantage point, as the previous mountain photo. 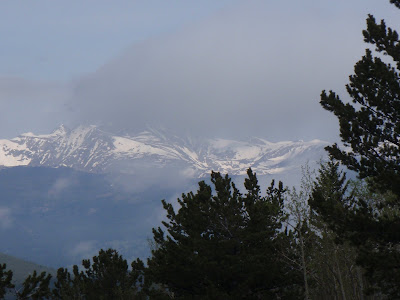 Later, on the solo part of my ride, the weather spiraled down to 40 degrees and drizzle. I ended up freezing - dressed for spring in winter-like weather. I wanted to cut my ride short by riding home on the road but the thick fog scared motorists so much that they had 4-way flashers going. So, I stuck with trails despite the longer distance, sprinting toward a hot shower as fast as my quads could propel me. That's fickle springtime in the mountains! 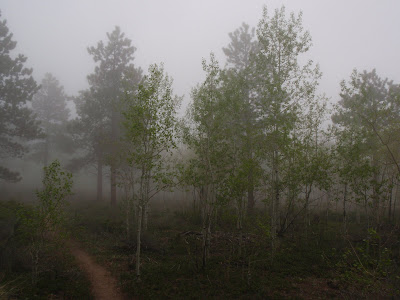