Bears in our forests

Last night, mama flycatcher slept atop her squirming pile of nestlings yet again. She spread her wings and covered them like a blanket. The babies take up every inch of the cup nest so mom looked balanced precariously on top. 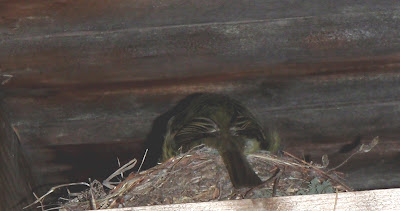 This morning, I had a plan to head up to the Divide for a hike but storm clouds menaced the mountains early. Feeling a bit depressed about it, I scrapped my plan and went for a mountain bike ride with K. Now, I'm glad that my plans changed because I had a magical encounter with a bear cub at the end of my ride.

At the beginning of the ride, K and I climbed up through a mixed aspen, shrub, and pine forest. For the second time in the past week, a massive bear scat sat, full of territorial meaning, blocking the sinuous path.

Always the scientist, I measured it (each segment >2" in diameter) and investigated what it contained (mushroom pieces, berry pits, seeds, - and notably, no human-related foods) with K watching over me. In the photo, the scat is in the extreme foreground. 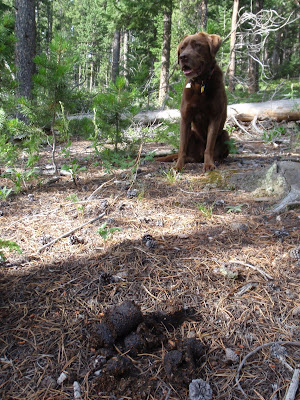 As I examined it, K picked up a scent which soon monopolized her attention. She craned her neck, wiggled her nose, and gazed into the distance. 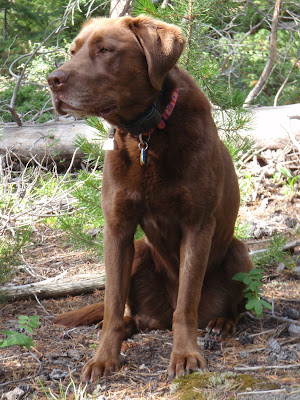 Finally, K fully immersed herself in the scent. I worried that wildlife roamed nearby so we moved along. 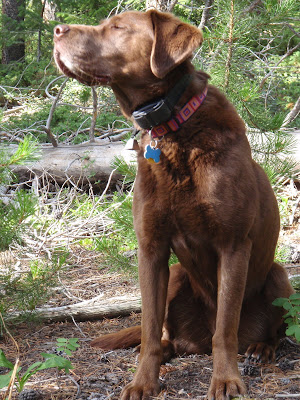 That photo highlights something that I'm ashamed of, a remote shock collar, that I've used to stop K in her tracks when she's chased coyotes, putting her own life in danger. I haven't used it in more than a year but I still fear that she might, yet again, fall for the luring and then attacking tactic of our local coyote pack. I've blogged in the past about my decision to use the collar. In retrospect, I'm glad that I did use it because her life was in danger, and I'd exhausted my arsenal of positive training methods to deal with the problem. In our last few coyote encounters, K has returned to me by her own decision and received a mountain of treats!

When we emerged from an aspen forest to an unobstructed view of the mountains, the clouds hanging so ominously over the mountains made my decision not to visit the alpine meadows seem smart. 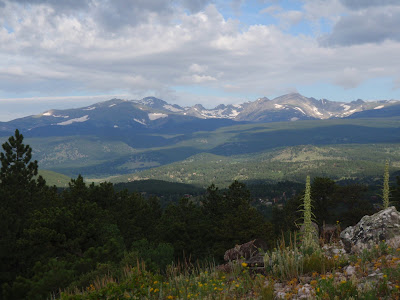 Two deer, young males with budding velvet antlers, browsed to the west of the peak where we lingered. K kept a close eye on them but left them in peace. She sat in front of me to remind me of the treats that she'd earned with her good behavior. 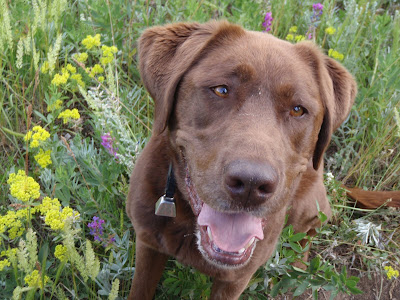 We clattered down the hill and into the forest, traversing my favorite trail. This trail lulls me with deeply forested pine glades and soft pine-needle laden paths, punctuated by sudden bright views of the mountains. In the 20 minutes since we'd left the peak, the clouds had swelled upward although some blue sky still fought them off. 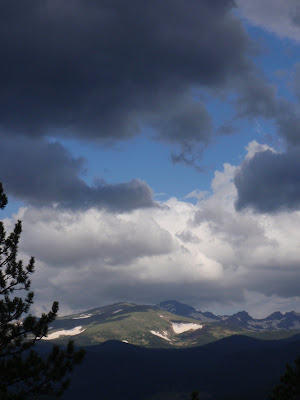 As we rounded a curve in one of the dark forest sections, K suddenly switched modes, to the high-alert bear mode that I've learned to recognize. For the rest of our ride together, I yelled 'Hey bear' as we approached blind curves. I love seeing bears when I'm by myself but I worry about whether K might get hurt in a close-up encounter.

Just before returning to a main trail, we gazed one more time at the Divide while stopping for a hug. Yesterday, I started organizing all of our photos of S, a journey that left me feeling sad and very protective of our dogs. The view of the Divide matched my inner angst. 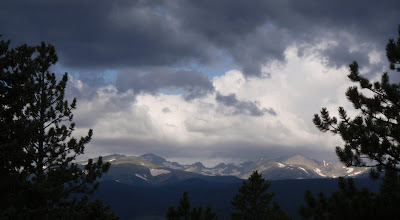 After I dropped K at home, I packed a rain jacket, fully expecting a drenching, and headed out for some more riding. Although the surrounding peaks looked scary, I was in a moving pocket of sunlight for the first half of the ride. I spotted a Rocky Mountain Dotted-Blue Butterfly (Euphilotes ancilla), on a dry rocky ridge, drinking the nectar of a Sulphur flower, which my butterfly book says is its favorite food. 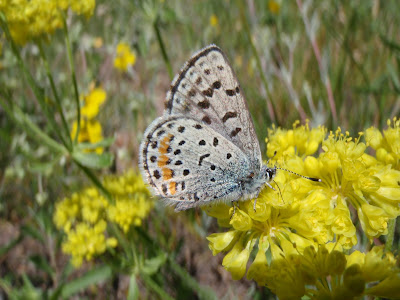 The wildflowers have transformed this exposed ridge, making it a magical place that I can't resist visiting. I don't remember ever seeing such a vast array of wildflowers that paints the entire ridge in shades of yellow, purple, and red.

Alas, as I climbed the last little peak on the ridge, the mountain view sent me into turbo mode to try to beat the lightning home. The peaks themselves now had no spots of sunshine on them and I heard rumbles from the west. 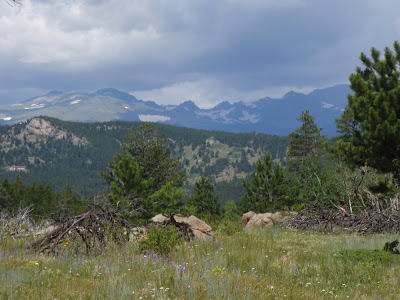 I put my head down and rode like a lion was swatting at my back wheel. It felt good to rev up the engines. A series of storms moved over me in rapid succession. A frenzy of raindrops would drench me but sunshine would reassert its power within 5 minutes. I never put on my rain jacket despite several downpours. Each time, the sun warmed me within minutes of being rain splattered.

As I got tantalizingly close to home, the lightning flashes seemed brighter and closer, scaring me. I found yet another turbo gear in my pedaling action. I rode as fast as I safely could, with my head down, watching for obstacles on the trail. Then, I heard a branch crack. It had my full attention but I hadn't stopped riding yet. Another loud crack. I halted, and looked up to see a tiny bear cub, within 15 yards of me, galavanting across the forest floor toward his mother and sibling who waited about 50 yards away. He was a jet black ball of fur, leaping, tumbling, and skittering toward the safety of his mom. He looked a bit smaller than our 55 lb Black Lab R. I'd guess he was 30-40 lbs. He was definitely a 'cub of the year', born during last winter's hibernation.

I lost myself in the wonder of watching the cub, with almost no fear, because I knew that I wasn't between him and his mom. As he lept one log, I actually saw the pinkish soles of his paws. Despite his irresistably cute demeanor, he moved fast. By the time I readied my camera, he was too far away for a good photo but I did capture his distant silhouette. He's the black form slightly to the left and below the center of the photo. 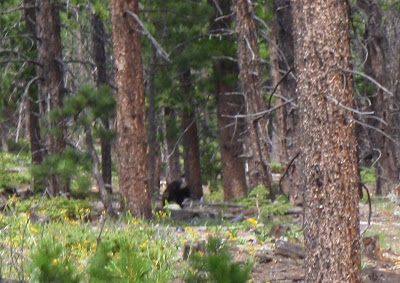 What a magical way to end the ride. I was drenched in rain with mud splatters decorating my legs but the warm sun lit our small slice of the forest. And, a family of wild animals graced me with a glimpse of their life.
Posted by KB at 4:49 PM