A manic dog and ride

During our bike ride early this morning, K zoomed around frenetically and her mood bordered on manic. No doubt, wild animals triggered it. She began drooling, whining, and charging ferociously into the forest when we passed downwind of a berry-rich glade where the bear family roams. Drooling is a general sign of anxiety in dogs but K reserves it for bears.

However, today, after I called K back to me, she couldn't find the self control to remain by my side - which seemed so odd that it caught my attention. Her body language seemed herky-jerky as if she had pure adrenaline coursing through her veins. She finally calmed down enough to stand still when we climbed to the rooftop of our trail system. K looked into my eyes imploringly. 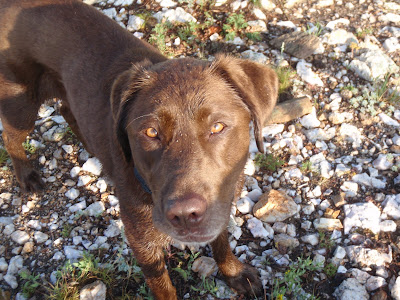 When we emerged above the trees, the sun's rays had just touched our little peak and the forest to its west. A magical hue tinted the pine trees and stormy sky. For our little slice of the Earth, it was not a normal summer morning. The day dawned cloudy, cold, and damp. A curtain of clouds shuttered the mountains. The view below usually highlights the Continental Divide. 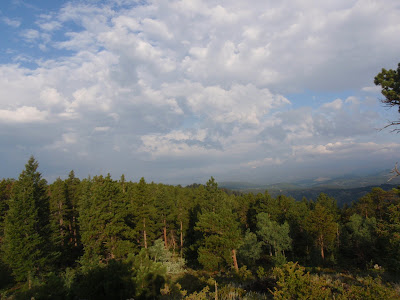 After our short break, K and I bounced down the hillside to a forested trail, and she ran next to me with a smoother gait than earlier. But, she still had a jagged edge to her energy like she'd imbibed an entire bowl of espresso this morning. Even when she sat still, she fidgeted as if she had ants crawling all over her.

After I dropped her off at home, I wanted to do a high intensity ride. However, my body refused - my heart rate seemed to have a glass ceiling. So, I changed my plans, moved more slowly, and immersed myself in the wild and precious forest.

In a dense pine forest glade, I passed tiny pink flowers that glowed like fireflies in the night. This spot was where K and I stopped to remember Rover the other morning. Based on the photos that I took that day, I wasn't able to identify the flowers but today I took another careful look. 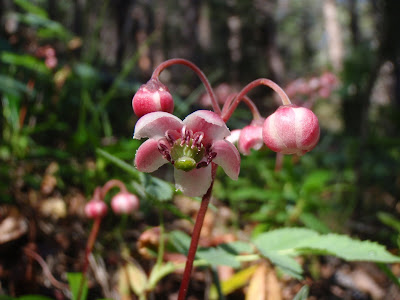 No doubt, they resembled the Pink Wintergreen flowers that I'd seen in a similar spot a few weeks ago. So, I researched the Wintergreen family, and I found my answer! They're Prince's Pine (Chimaphila umbellata occidentalis). "Umbellata" is Greek for "umbrella", which makes sense if you look at the shape of the flowers. These flowers look exquisitely delicate, especially when they're the only wildflowers adorning a dark forest floor. They inhabit forests across much of the US but most subspecies have white flowers rather than pink ones.

I passed another intriguing sight, Spotted Coralroot plants growing directly out of a rotting log. I highlighted this orchid species back when it bloomed, and now the flowers have become seed pods. These alien-looking plants have no green parts and no leaves. Both were lost through evolution, and these plants survive on energy produced by fungi digesting dead wood and other forest debris. 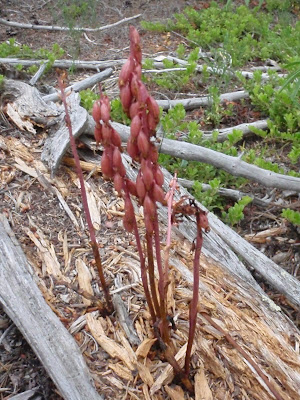 As I headed toward home, I glimpsed the mountains for a brief, almost surreal moment. Then, the curtains slowly closed and the show ended. 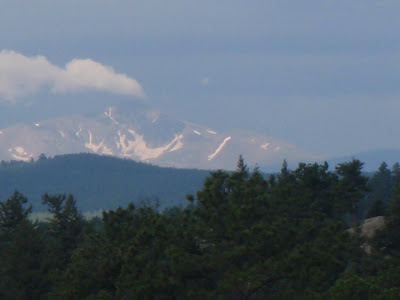 Later in the day, K's 'ants-in-her-pants' behavior continued when I took her to our 'drop-in' advanced dog training class. We haven't attended in about a month, due to vacation and K's leptospirosis, although we've been regulars since K was 6 months old. During class, K's weird, almost clashing, combination of manic and shy behavior devoured my attention. It might have even been comical if I hadn't been worrying about why K was so agitated. For example, during a 'wait' exercise, K repeatedly cruised next to me and then halted in her tracks when I uttered the 'wait' cue, looking like a well-trained dog. Then, out of the blue, she took a wild leap at someone - not an aggressive leap but an excited and out-of-control puppy lunge. On another occasion, she dropped to the ground to wriggle on her back in the midst of perfect heeling. In the photo below, K is heeling on my right while making eye contact. Her face exudes tension. 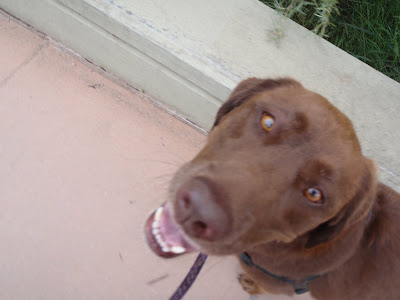 While I tried to patiently cope with K's wild behavior vacillations, our trainer, Gigi Moss, reminded me that K's frenetic behavior undoubtedly reflected how she felt. This way of thinking is what I love about positive training and about Gigi, in particular. Training isn't about 'forcing' your dog to do something. Rather, it's about understanding your dog's motivation and state-of-mind to decipher and shape her behavior.

As I thought from Gigi's viewpoint, I became convinced that K's thyroid levels had dropped below a critical threshold, yet again. I suddenly recalled seemingly insignificant recent episodes like when she tip-toed to avoid the scary cracks between the boards in the deck, when she shied away from a set of steps in the dark, and when she softly growled at R for his crazy antics designed to tempt her to play. Then, I realized that she's been shedding fur at a surprising rate - at a very odd time of year for shedding. All of these things have characterized her past 'low thyroid' phases.

Ironically, when I arrived back at the car after class, I received a message that her routine blood draw from last week showed low T3 and T4, both of which are key thyroid hormone components. So, the good news is that pieces of the puzzle are sliding together perfectly. Now, we have to fine-tune her medications so that she can feel relaxed and calm again. That's often a challenge.
Posted by KB at 3:50 PM