A couple of days ago, K started slurping water at an unprecedented rate and requesting frequent 'natural breaks'. Yesterday, we learned that her urine is much more dilute than usual. Then, I realized that almost two weeks ago during our vacation, K had a sudden new-found interest in drinking from muddy puddles instead of from the clean water supply that I carried for her. This confluence of symptoms and timing points toward a low-grade case of leptospirosis, which has an incubation period of 7-14 days. Apparently, it's rampant here due to our soggy weather, ideal for leptospirosis bacteria growth. Our vet has seen a parade of sub-acute cases over the past months. So, K has started taking high-dose antibiotics, and we're watching her closely. The test for leptospirosis is slow and expensive so my vet advised immediately starting treatment without testing.

Knowing our history, our vet quickly reassured me that not all cases progress to the life-threatening level that we experienced with our dog Astro many years ago. In his case, leptospirosis rapidly damaged his kidneys and liver, leaving him furiously fighting for his life. He won the war, at least partly due to his spunky indomitable spirit, and lived another ten years. But, our knees still quake at the thought of the disease.

In K's case, her energy is sparkling at almost its normal brilliance so my vet said that she could exercise as usual, as long as I watched closely for the slightest hint of weariness and offered her frequent drinks. We did a short ride, stopping for views and fun. We climbed a rocky outcropping. 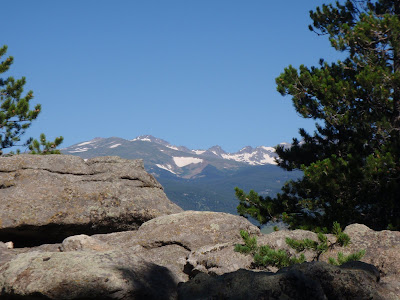 K hopped up for a view of the mountains. 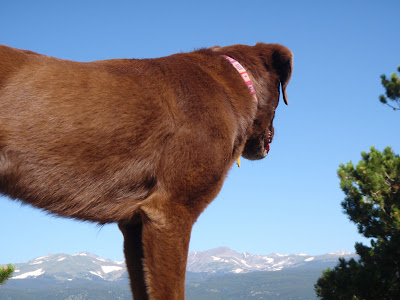 Then, she seemed to pose like a statue for me. I know that I'm biased but I think that she looks like an amazing athlete. So strong and lean. 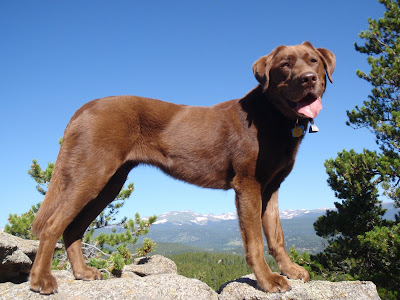 On our way home, I crashed to the ground on a loose rocky trail. My brand-new tires, whose responses aren't yet familiar to me, slid sideways on an off-camber section, and I hit the forest floor with a thump. I lay still for a moment, taking inventory of what parts hurt and letting my adrenaline levels retreat to normal. K, forever my guardian, hovered over me looking worried and, amazingly, ignoring the pile of dog treats that had spilled from my bag. Once I realized that I'd escaped with only cuts and scrapes, I had to take her photo from my prostrate pose. It's very close-up because of how closely she guarded me. 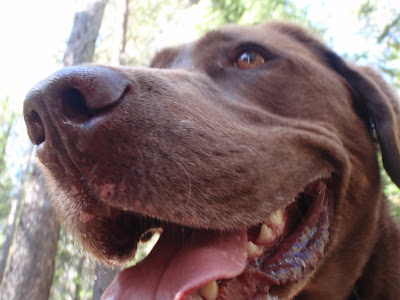 Even after I sat up, she still stood guard, scanning the forest around us. I'm filled with wonder at the partnership that she and I have. I'm a lucky human. 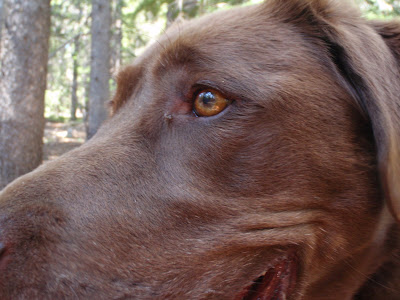 I crashed with all my weight falling directly onto my camera, which I carry in a thinly padded case on my hip belt. I chose this camera because Olympus claims that it's waterproof and impact-proof. I've inadvertently tested both of those claims, and they hold up. It's an Olympus Stylus 1030SW in case anyone else wants a camera that can take serious abuse.

We rolled home, finishing a short ride with no more drama and with K's energy levels untarnished. The relatively minor drinking/urinary issues are continuing, but not getting worse. Apparently, that's to be expected for a couple of days. My fingers are crossed.

After I dropped off K with my husband at home, I did a mellow ride, seeking out wildflowers and mountain views in this extraordinarily gorgeous summer. 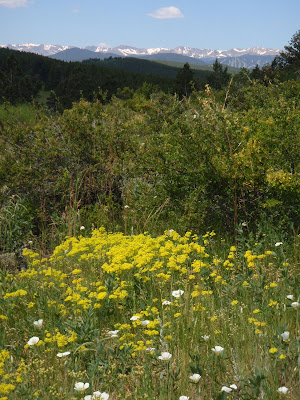 I stopped at a columbine grove where a few blossoms still radiate beauty but their time to shine is dwindling. As I gazed at them, I smelled the sweetness of strawberries. Among the columbines, our wild strawberries, bright red and ripe, looked succulent. I foraged for a while, nibbling on these tiny gems. What a treat. 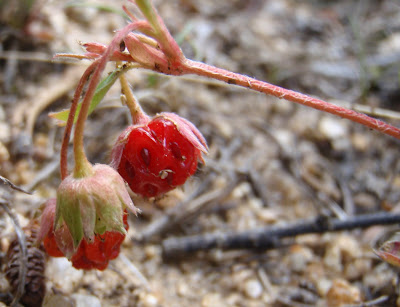