Pedaling through the mist

As I woke up this morning, I thought that someone had beamed me to another part of the country - a wet, cold, and gray part. Living in Colorado has spoiled me. One rule of thumb is that it almost never rains all day. A thunder storm usually erupts in the afternoon, but it's brief and intense, and then the sun dries everything out. In fact, I've read that we have more than 300 "sunny" days each year. I'm not sure of the definition of a "sunny day".

Somehow, K and I persevered, and we headed out into the 40 degree air with rain splattering out of the sky. K didn't mind in the least, and I tried to emulate her happy attitude. I lived up to her standard until the rain had leached into my bones and my extremities glowed white with cold.

Almost as a joke, we rode up to our favorite look-out point. Since we were actually in a cloud, I couldn't see anything beyond a small circle surrounding us. I asked K to sit next to my bike for a photo, and she was afraid of it, continuing her odd thyroid-addled behavior of yesterday. I think it was the pogies that spooked her. They're the big black insulated and waterproof mittens mounted on my handlebars. Astonishingly, not only did I use pogies today, but I also used chemical hand and toe warmers. And, it's JULY. 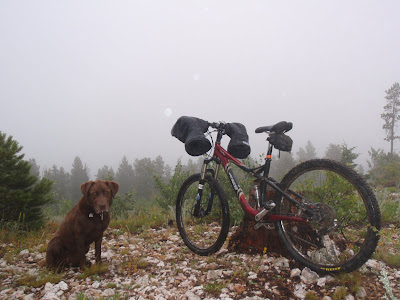 We rolled along a forest path with great caution. Off-camber wet roots and logs mimic black ice when a bike tire touches them. 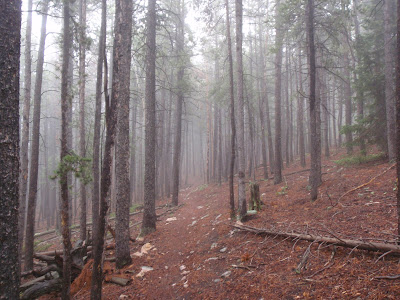 As we headed back toward home so that I could drop off K, we found part of a rib cage of an animal that certainly died within the last 24 hours. The remaining muscle glistened with bright red blood. Because I didn't have the whole rib cage, I'm not sure what animal it was. A fawn? A bear cub? 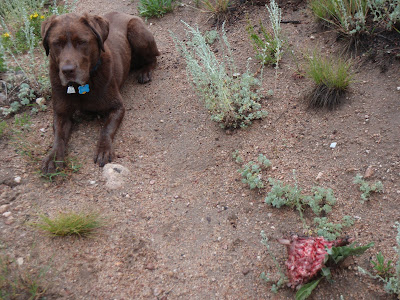 All the time, I kept an eye on K's body language to see if she sensed a predator nearby. Watching my dog for scent information became second-nature when I trained my dog, Acadia (see her photo in the sidebar), to be an air-scenting search and rescue dog. Here Acadia lies on the Pacific Crest, a happy dog on top of the world. 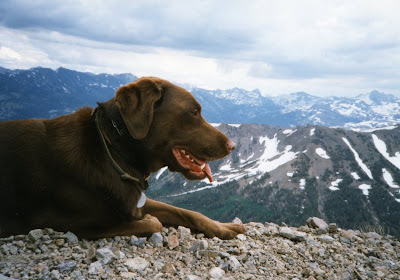 And, here Acadia and I backpacked before my spine became too fragile to carry a big pack. We're on an expansive snowfield, covering one side of a steep cirque that sloped down into a frigid snow-fed lake. Don't worry - I wore crampons and carried an ice axe (and even knew how to use it for self-arrest if we slipped). 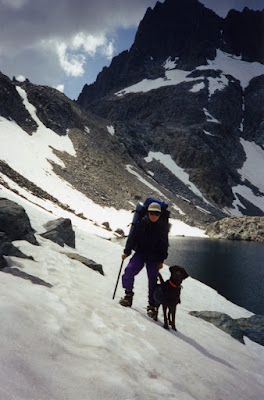 Through search and rescue training with Acadia, I learned that a dog can discern a scent, like a human, from an inconceivable distance and can follow the 'scent cone' to its pinpoint source. Using this laser-sharp sense of smell, a dog knows more about what animals, human and others, currently reside in an area or have recently traveled through it we can even imagine. The only way for a human to get any clue about what a dog smells in the wind is to 'read' a dog's body language. To make a long story short, K looked alert but not concerned as she lay next to the ribcage. I always look to K for my cue about whether to be concerned in situations where predators may lurk nearby.

About 20 minutes later, I passed the same spot as I headed out on my solo ride (imagine the Jaws soundtrack now), and the ribcage had vanished. I saw tracks next to its former location but couldn't see enough detail to identify them. The vanishing act gave me chills. The specter of an animal secretly spying on K and me while we investigated the rib cage swirled through my mind. Like I wrote the other day, the "lions and tigers and bears" are starting to spook me because the evidence of predatory activity is skyrocketing.

As I rolled through the rain on my solo ride trying not to look over my shoulder too often, Harebells drooped under the weight of the droplets on their petals. These bell-shaped flowers served as forerunners for the current purple wildflower wave that includes Horsemint, Mariposa Lilies, Colorado Loco, and Asters. 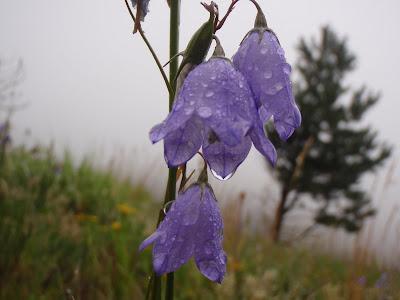 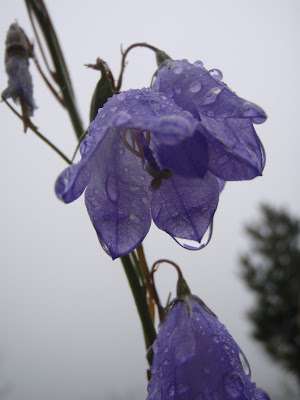 Shortly after I marveled at the Harebells, I saw a friend out trailrunning, accompanied by only one dog rather than her customary two. Tragic news - a few days ago, her golden retriever died suddenly of hemangiosarcoma. At precisely that moment, the light rain turned into a bona fide downpour, noisily rattling my brains as it pounded on my helmet. I felt like the heavens wept for all the sweet dogs who have died recently, leaving behind heart-broken families. Later in the day, I saw a rainbow (top photo). Oh how I hope that there's truth in the Rainbow Bridge poem.

It felt like the remainder of my ride was a death march. I was sad, soaked, and chilled. With every pedal stroke, my feet squished in the water pooling inside my shoes. But, I just kept pedaling, inexorably rolling closer to home. Some days, that's all that I can do. I made it home, took a hot shower, and sat next to our fire. I'm lucky that I have a warm place to live.

As I completed my 'death-march' part of the ride, I still had my head up scanning for animals and other interesting forest inhabitants. I never know what magical scene I might find in the forest - a gallivanting bear cub, a stalking lion, a strutting bobcat, a neon mushroom, or a bright flower. Even in dismal conditions like today's, I'd rather visit the forest than stay home and dry. 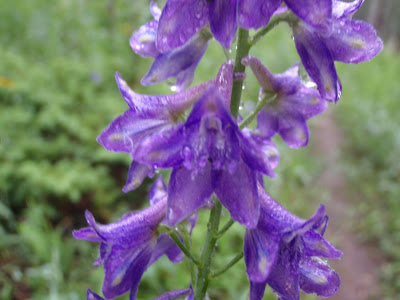