Top of the world

After a stormy but relaxing few days near Georgia Pass, we made the cardinal mistake of trying to move to a new campsite on a Saturday. We ended up wandering around, searching for someplace to camp near Mount Princeton. We searched out every legal option and found 'campground full' or 'no camping' signs everywhere. Finally, after dark and so tired that we were delirious, we lay our heads down for a short night's sleep directly in front of a 'no camping' sign. We were prepared to pay the fine meted out by the officer that we felt certain would jolt us awake in the middle of the night. But, to our surprise, by waking up very early, we escaped the scene of the crime undetected.

We took a short ride and run on the Colorado Trail through towering aspen groves. 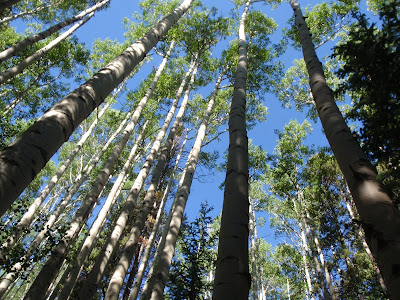 The narrow and buttery smooth trail wound around the base of the chalky gray Mount Princeton. 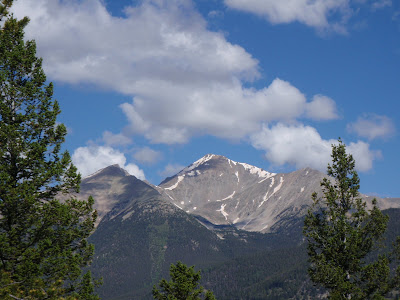 Later in the day, we returned to a campsite that we used two years ago, when K and S were our canine family. It was a scary feeling knowing that S's death and R's birth separated our two visits to the site. No doubt, we all have finite horizons so it's best to seize the moment.

'Our' campsite borders a high altitude meadow that vibrates with life. 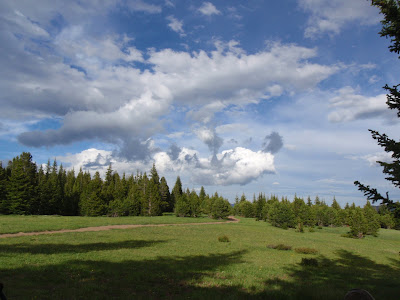 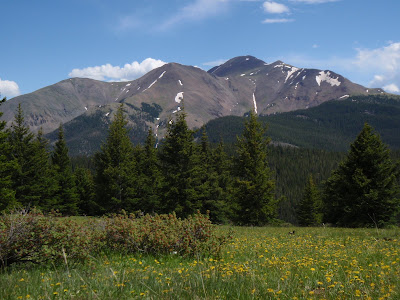 Myriad birds nest in the pine trees bordering the meadow, subalpine flowers bloom, and deer and elk meander around the borders. 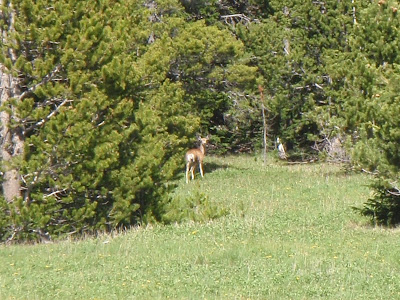 More ominously, we found a huge and fairly fresh lion scat on our first day. It makes sense - a mountain wonderland for ungulates will draw their predators. However, we took more precautions than usual to make sure that neither human nor canine was ever alone on the meadow's edge at dawn or dusk.

Two mountains towered over us, Mount Antora and Mount Ouray, and the sun played magically off their slopes at sunset. 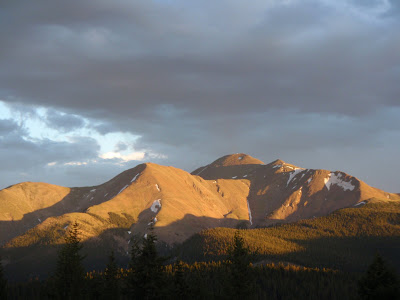 At dusk, the pink sky painted the peaks rosy. 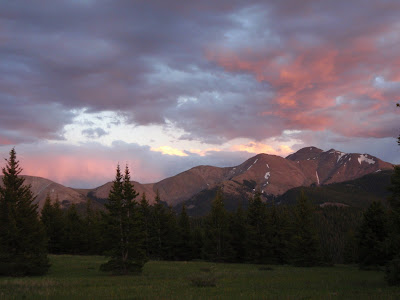 It was amazing to live, however briefly, in such a peaceful yet awesome spot.

Early in our stay, K and I headed out onto the Monarch Crest Trail, a mostly alpine tundra singletrack path that follows the Continental Divide. To reach the tundra, I pedaled and K trotted through a spruce and fir forest littered with boulders. Just below treeline, a marmot, a huge rodent who spends most of his life in a subterranean den, posed for a photo. These rodents typically live in subalpine and alpine areas and build elaborate dens under boulder piles. 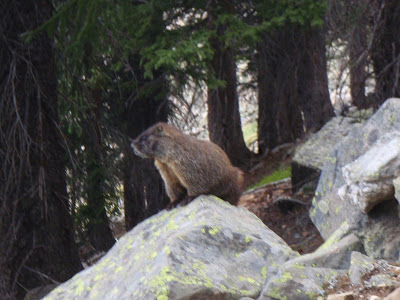 Eventually, we burst above treeline at a snowbank and the seasonal pond of its melted water. K's joy was palpable - both snow and swimming at the same time. Wow! 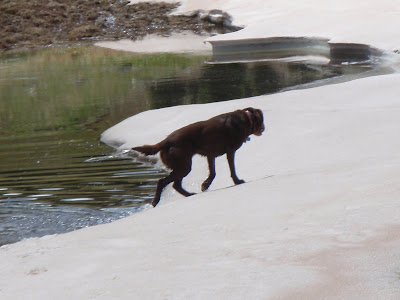 When we first emerged above the trees, the mountains on the horizon still looked higher than us. 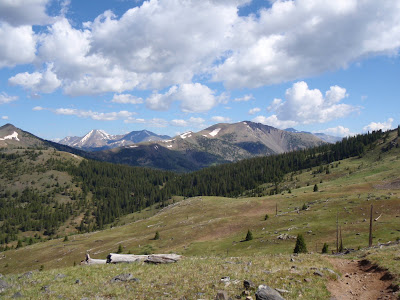 K eagerly led the way toward the sky. It was a perfect day to have a canine companion on this trail because we didn't see another soul. 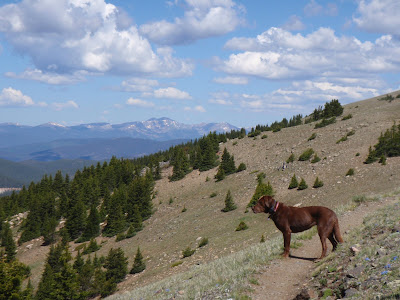 A few snowbanks blocked our path to the high plateau, which we clambered over, slip-sliding our way upward. In the photo below, the narrow trail sinuously wends its through the scattered conifer trees and then makes a beeline to the edge of the snowbank guarding a ridge. 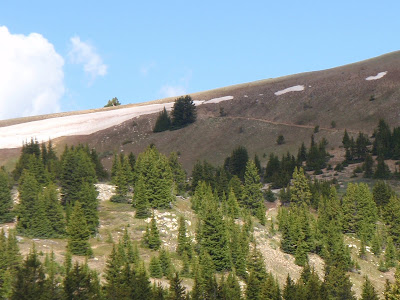 As we crossed the snow, I noticed that Snow Buttercups poked through the crusty snow and bloomed. This feat astounded me. How do they grow in the freezing environment below the snow? 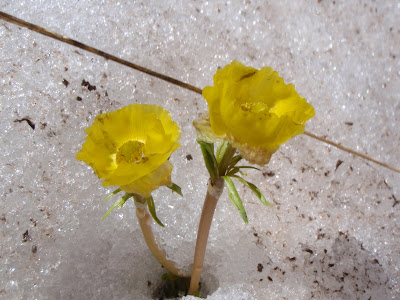 After climbing to the ridge, it felt like we looked down upon all the peaks around us. 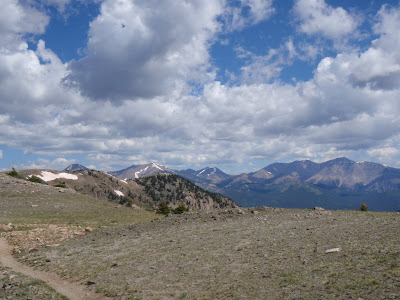 For me, this 'top-of-the-world' feeling is unbeatable. I could have relaxed in the sun, enjoying the thin cool air and the silence, broken only by the wind's whisper, forever. Alas, the usual afternoon storm clouds amassed around us, pushing me to move along. 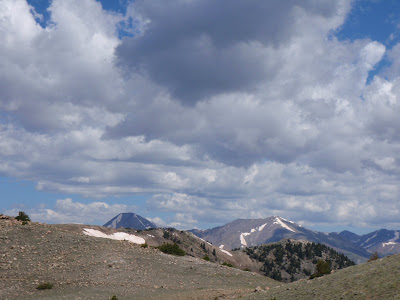 We headed back down toward camp, feeling grateful for another sweet day in the mountains.
Posted by KB at 4:25 PM