Yesterday evening, the veritable parade of wild animals that we know are wandering through our forests and meadows convinced me that we needed to practice dog recalls even more intensively than usual.

One of my favorite ways to practice is to leave K and R in sit-stays and to walk a long distance, well out of sight. R has decided that the best method for assuring that he 'wins the race' to me is to block K as they approach me. Here, at the end of a 200 yard recall, he is trying to slow her down. I'm not sure why winning the race is so important to R since they both get heaps of treats on arrival. 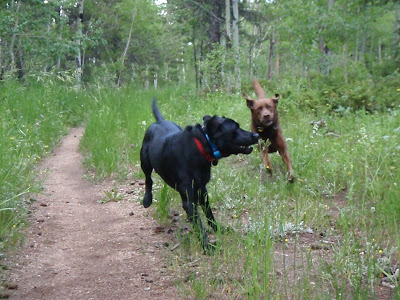 Then, a stride later, they're both homing in on me like torpedoes. It's hard not to flinch and keep taking photos! Obviously, R's 'blocking' worked - he's ahead. 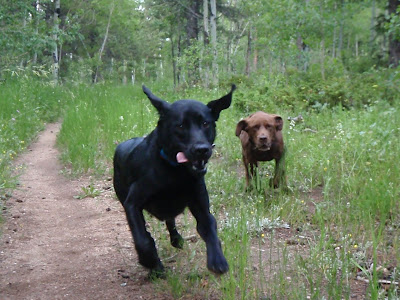 Later in our hike, I did recalls in less controlled circumstances. Rather than having the duo start in sit-stays, I called them as they played or sniffed. K flew toward me. 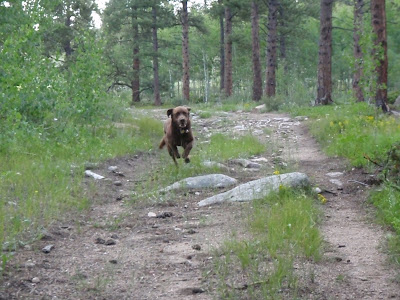 R streaked at me, through a patch of sunshine in the meadow. 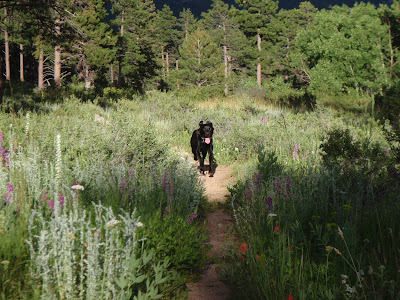 I take recall practice very seriously. I believe that my dogs must have extremely reliable recalls to earn the privelage of hiking off-leash on trails. Due to never-ending practice and sage advice from our trainer, Gigi Moss, I can call the dogs even when they're tempted by deer, like the one with velvet antlers who crossed our path today, or almost any other animal. Practice, practice, practice. 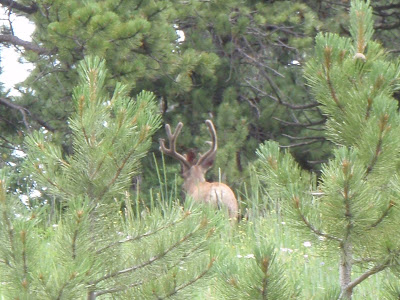 When we arrived home, our zany character, R, wriggled under the bed for a snooze. He seems to like being underneath objects for naps, including chairs, vehicles, and beds! 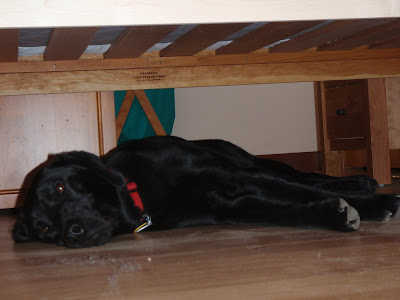 This morning, K and I rode through a moist forest, soaked by yesterday's train of thunder storms. Mushrooms bulldozed their way from below the soaked soil. 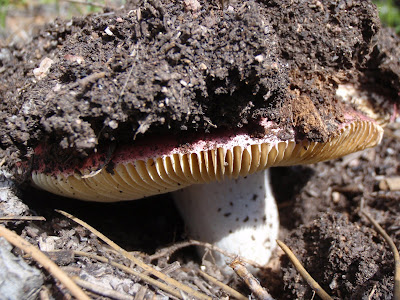 As a young dog, K had serious mushroom addiction problems. Her first dabbling in fungi involved eating the type of mushroom shown above (which I've never positively identified). In our 'home' forest, she ate only this one type with no ill effects. I carefully showed her our most poisonous type, Amanita muscaria, and she backed away like it was, well, poisonous. She never sampled this type. I took the photo below yesterday. These almost fluorescent red mushrooms currently decorate the pine-needle carpeted forest floor. 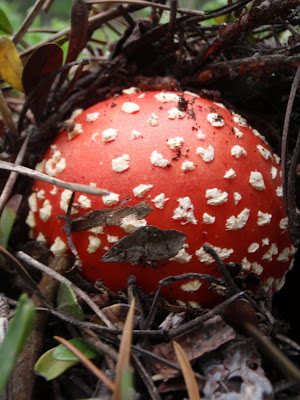 The good news is that K has outgrown her mushroom obsession. That's especially good news this year because I've never seen such a variety of mushrooms littering our forest floor. I have no idea which are edible and which might kill a dog.

K and I rolled past a yellow-bedecked plant, that I've seen only one of throughout all of our forests. I tried to identify it last year and failed. I took numerous photos today, with K guarding my back but I still can't find it in any wildflower book. I'm starting to wonder if it's an escaped domesticated variety. 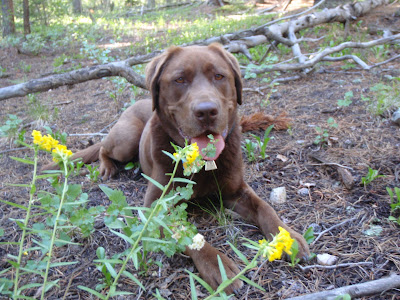 We sat, sunbathing, next to Columbines clustered under an aspen tree at the meadow's edge. The columbines have passed their peak, although some still shine, at our elevation. I'll have to go higher in the mountains to get my fix in the near future. 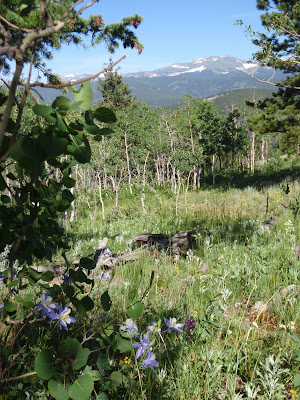 After I dropped off K, I did a long but mellow ride. As I rode, the dark clouds gathered and became organized over the Divide. The dark sky contrasts with the yellow carpet of wildflowers on the ridge. 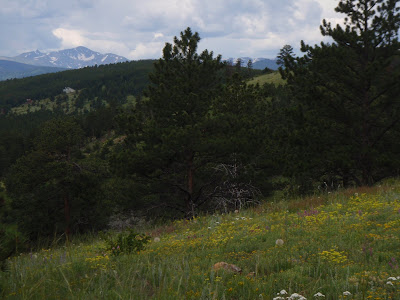 A closer look revealed that the yellow carpet was comprised of Sulphur Flowers (Eriogonum umbellatum) with other plants, like white Mariposa Lilies, mixed in. 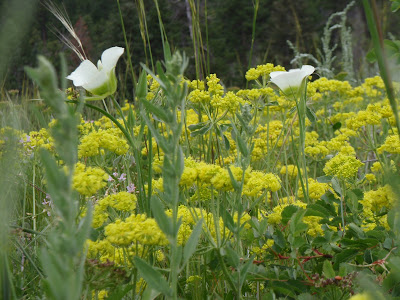 The Sulphur flowers need to hire a new public relations firm to get a name that suits their magnificence! 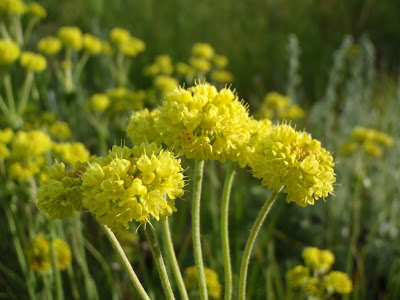 As I rode, storms continued to organize and advance, rumbling in the distance but I easily beat them home. The gray clouds gave the mountains an eerie and foreboding tinge. 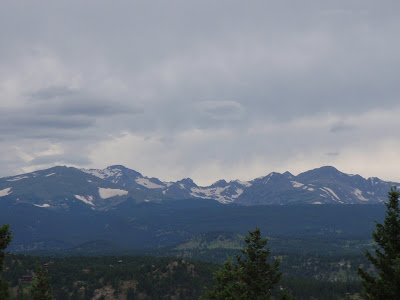