A remembrance, a ride, and flycatcher chicks 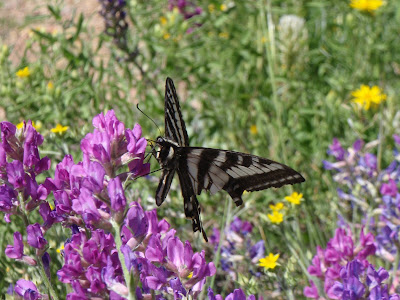 Yesterday marked a tough anniversary, made more painful by S's recent death. Six years ago, my dog Acadia died, and my heart shattered into a million pieces. She taught me how close a human and dog can become. On the day that Acadia died, I noticed that Fairy Trumpets had just begun blossoming. On that desolate day, it felt like their pristine beauty heralded her passing. Yesterday, I spotted a hillside of Fairy Trumpets and took a photo in Acadia's memory. 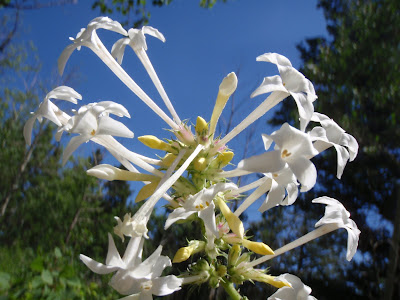 Nearby on the hillside, the gold and rust of a Blanket Flower shined brilliantly against the blue sky. Life does go on, and beauty still soars even after heartbreak. 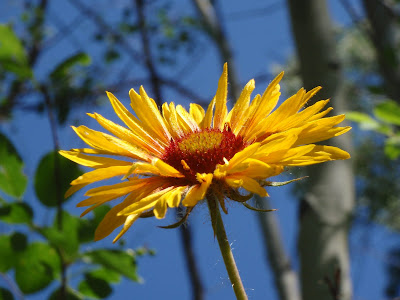 Yesterday evening, we sat on the deck until darkness fell. In the rapidly fading light, a small black bear emerged into our clearing. Her mission was obvious - to test whether our garbage cans can withstand a true bear assault. We scared her away in the midst of her 'covert' operation but she left a single puncture hole where she bit straight through the tough-as-nails plastic. I'm sure that she'll be back. I'm rooting for the 'bear-proof' garbage can!

This morning, the zany and energetic R joined K and me for our mountain bike ride. That boy astounds me daily. He's a perpetual motion machine, legs churning furiously to cover every square inch of the forest around the trail. Today, he tried some 'argy-bargy' to try to force me to move aside for him on a narrow trail. 'Argy-bargy' is a British term for the leaning, shouldering, and elbowing that bike racers do in a tight pack as they approach the finish line. Fortunately, I have professional training in 'argy-bargy' as my former coach frequently roughed me up during training rides so I'd be ready for racing in a tight pack. Today, R was mighty surprised when I didn't move aside for him!

We stopped first at Hug Hill to admire the azure sky, snow-spotted mountains, and the jungle of wildflowers on the hillside. 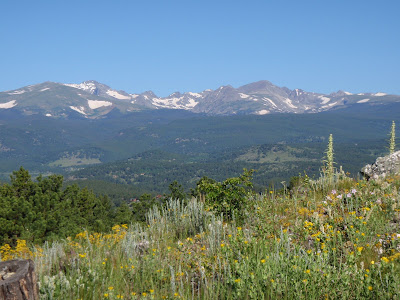 As we rumbled down the hillside into a pine forest, the canines uncovered the forelimb of the deer whose hindlimb they sniffed out a few days ago. K seems determined, in the words of my friend SMRP, to "have a conference with the mountain lion" who likely killed the deer. A hiding place downslope in a thicket of deadfall and boulders draws her like a magnet every single day. Don't worry - I haven't allowed her to attend that particular conference. 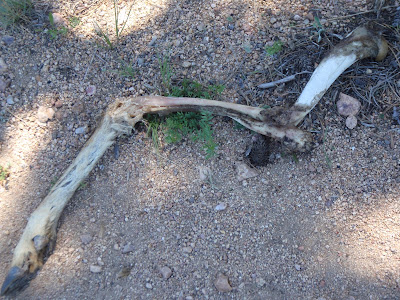 As we rolled through a forest glade that's a haven of moisture, I spotted, side-by-side, two plants that I've never seen before. And, Dr. Dog Geek, they weren't DYFs, like the yellow flower that I couldn't ID the other day. Your comment on 7/13 made me chuckle out loud.

Because the wild pup was with us, I put the dogs into an 'official' down-stay while I investigated the new flowers. Holding a down-stay is the antithesis of R's spirit - he loves high speed motion. Staying in one place tests his mettle. 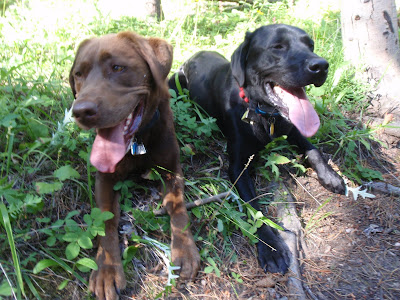 While R battled his restlessness, I soaked up the peacefulness of an enclave of Pink Wintergreen plants (Pyrola rotundifolia asarifolia). It was like a miniature forest of 8" tall stalks with magenta delicate flowers nodding from their sides. 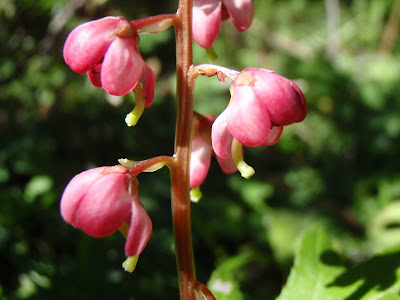 Next to the wintergreen enclave, a sea of Twinflowers (Linnaea borrealis) caught my eye. 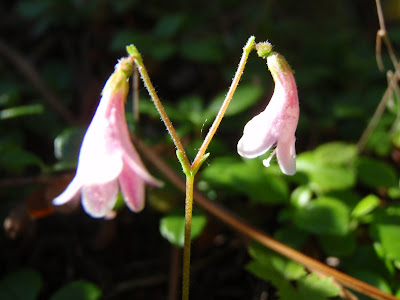 After I finally released the dogs from what R believed was an unreasonably long down-stay, we rolled home, where I left the dogs before heading out on a longer ride. It was an intense ride, involving lots of climbing, which I love. I let the wildflowers become a blur of color in my vision and focused on spinning my pedals as I rolled up and up and up. At the top of the relentless but invigorating climb, a familiar mountain peeked through the Ponderosa Pines. 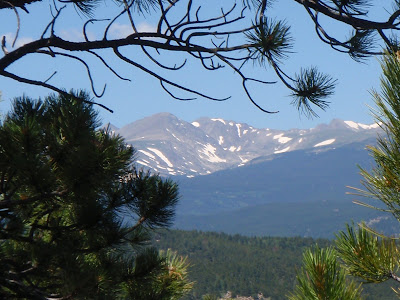 I arrived home pleasantly tired and ready for a shower but I noticed a flurry of activity in the Cordilleran Flycatcher nest under our deck. The chicks have sprouted downy feathers, although they still look like alien life-forms compared to their parents. 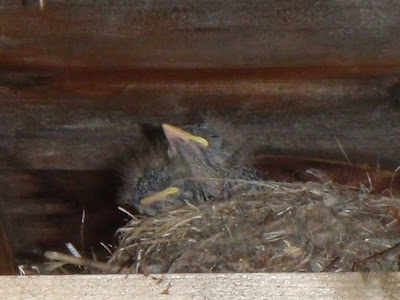 I counted four nestlings, all wrestling for optimal position while awaiting the fly delivery service. The parents seemed to trust me and fed the brood with me nearby. Between mom and dad, they dropped flies into the nestlings beaks about twice a minute this morning. What hard work! I predict that the miracle of the chicks' maiden flights from the nest tray is rapidly approaching. 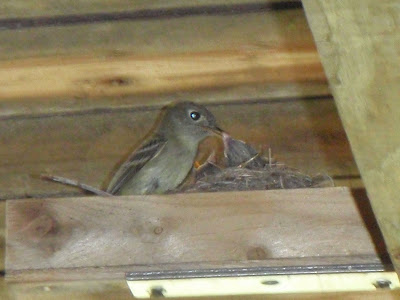