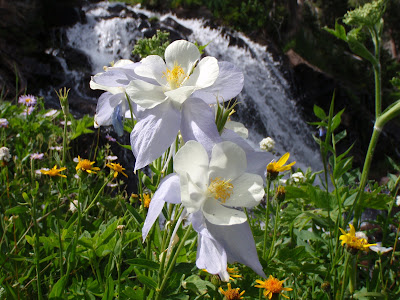 Yesterday, the weather forecast showed little chance of lightning storms so K and I swooped in for an alpine hike. My impaired spine hates hiking so I have a whole routine for pain reduction. First, I went for a short bike ride to loosen up my back - and it felt great. Then, I wore super cushioned running shoes rather than hiking boots. I carried only water, a granola bar, a lightweight rain jacket, Spot Messenger, and my camera. Finally, I hiked rapidly, since fast walking seems much better than slow trudging for my back.

Yesterday, despite the whole routine, my back screamed from the first step and sent streaks of pain down my leg. Something, inflammation, a bone spur, or a disc, definitely impinged on the S1 nerves (the nerves leaving the spinal cord just above the pelvis). Often, I get better as I get into the groove of hiking so I persevered. Unfortunately, the pain was my companion for the whole hike.

I make a point of not letting the pain stop me from doing the things that I love, like visiting high mountain vistas. Yesterday's hike paralleled a rushing creek still swollen with snowmelt. Over eons, the rushing cold water has worn a groove through a subalpine forest. The sweet aroma of pine sap permeated the air as we climbed upward with each step. Flowers that love moist pine glades lined the trail.

An understated plant, with cones of diminutive whitish flowers, popped up from every lush spot. I took a close-up photo, and when I looked it up at home, I discovered that it's Death Camas, a poisonous plant. It contains zygadenine, an alkaloid that's more deadly than strychnine. And, K had been nibbling at lush greenery all day long. Whew, a close call, and I didn't even know it. 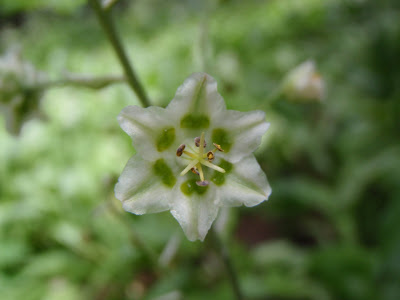 A gorgeous shrub with bright red flowers grew near a side stream - Bog Honeysuckle, I think. 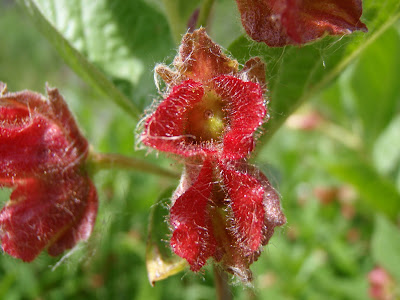 We soon spotted blue sky, rather than towering trees, above us on the trail and emerged onto a plateau spotted with snowbanks and lakes. A wild party of water-loving subalpine flowers met us. Jacob's Ladder, a tiny but beautiful flower, covered shady spots. 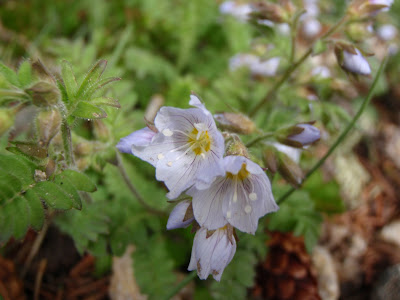 Out in the full sun, just below a melting snowbank, Parry Primrose brightly decorated a meadow. 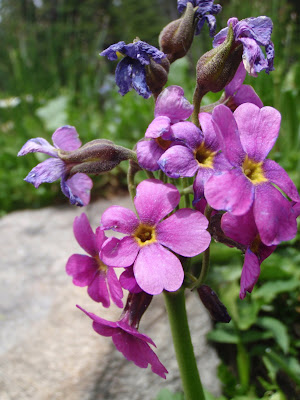 Just above the melting snowbank, we found the first of a trio of lakes that covered the plateau. K 'bagged' all of them. Her water-loving genes shined through! 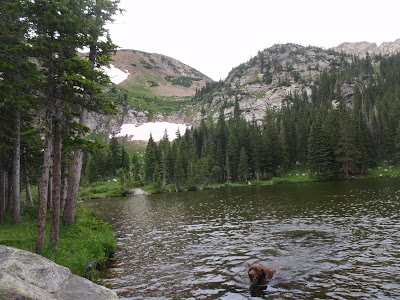 I wanted to climb above this plateau, inhabited by several camping groups and fishermen. Within the past few years, this area was designated 'Wilderness', causing a plethora of changes, most of which make the area less 'wild' than it was before. That's why I love getting away from the areas with trails and wandering cross-country to lakes or other spots that I spy on the map. Then, I feel like I'm in the wilderness.

We wound around the lakes and climbed next to a small stream falling from an enchanted kingdom, a lake-containing cirque, hidden in the sky. The wildflower party reached a new decibel level. 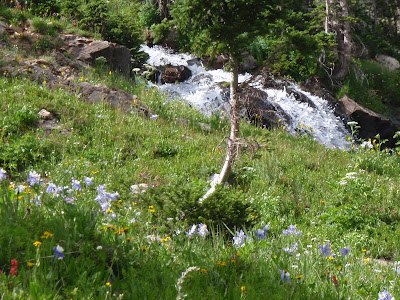 In the midst of the columbines littered everywhere, scarlet paintbrush flowers adorned the hillside, particularly flourishing next to streams. 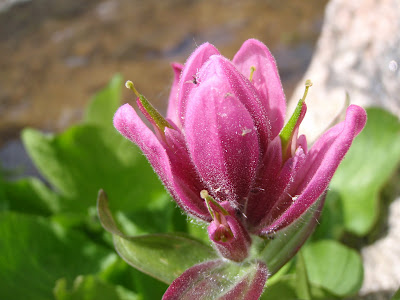 Every step took us higher, and soon we looked down upon the lakes that K had just bagged. 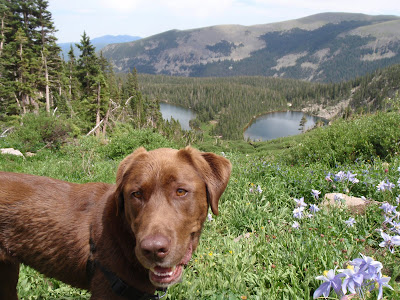 We climbed through a boulder field where a colony of at least six marmots lived. One, the 'town crier' perched on top of a boulder a whistled warnings to his brethren. They gracefully bounded, long tails trailing behind them, from one boulder to the next. Finally, they disappeared into their subterranean den. Even then, the town crier held his post, whistling shrilly, until K and I had disappeared. 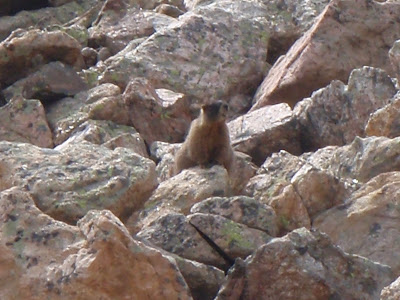 Finally, we after negotiating boulders the size of small cars, we glimpsed the aqua blue lake deep within a glacial cirque of sawtoothed ridges. A cirque is a rock-walled ampitheater, once excavated by the top of a glacier that likely flowed down to the plateau below us. 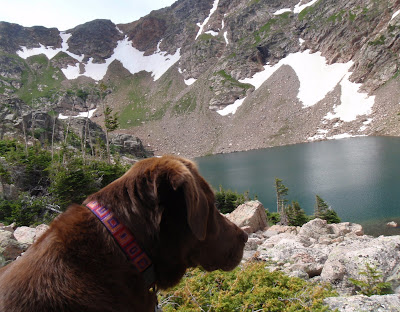 Despite the beautiful gem pulling us toward it, the sight of more boulders dismayed me. We continued boulder-hopping. To my amazement, a columbine plant, didn't just eke out an existence in between boulders, but sang with joy! 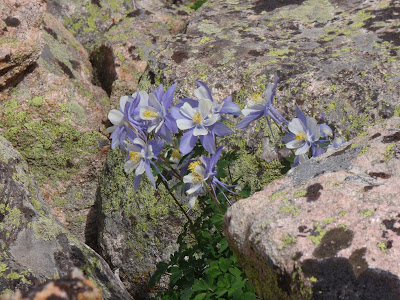 We finally arrived at lake level, to find no other people nearby. K swam and then lay in the sun. I think that combination is her favorite on Earth. Alas, soon we headed back down toward the plateau, following a different creek route than on the way up. Amazing wildflowers adorned our view of the opposite wall of the valley. 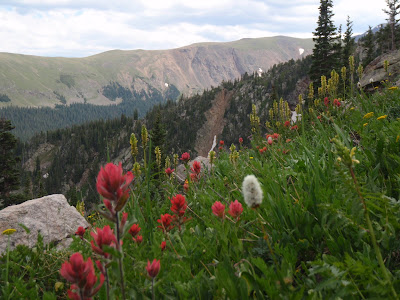 We arrived back at the plateau, pausing for a moment to reflect on our adventure up in the uninhabited enchanted kingdom. How I love wandering in the awe-inspiring wilderness, unencumbered, with my best furry friend. 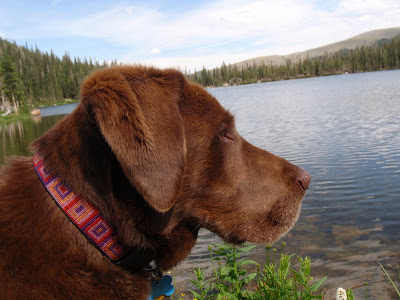