Yesterday afternoon, the lab duo and I wandered our trails with our friend and her chocolate lab, JB. Although JB is the elder statesdog, he whips R into a frenzy of playfulness and then watches when K and R get the 'zoomies'. Here, R chases K in circles around us. 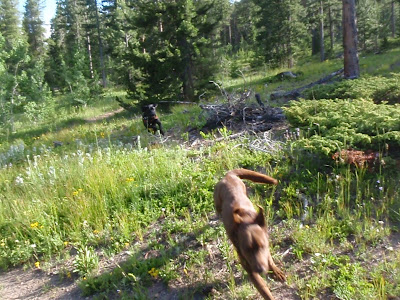 In the next photo, K has brushed past my legs with the slimmest margin for error, and R hurtled along just behind her. As I mentioned yesterday, R's puppylike exuberance counterbalances K's worrying nature. He goads her into simply playing and not worrying about being a responsible perfect dog. 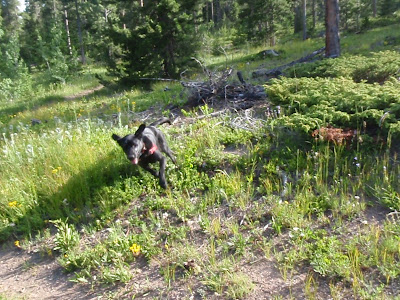 It was a mellow hike as we humans caught up on each other's lives while trying to identify an array of flowers, and the dogs engaged in carefree play.

Early this morning, I pedaled out onto serene and vacant trails with K by my side. A cornucopia of flowers lined the trails, overwhelming my senses so much that I had trouble focusing on any single one. 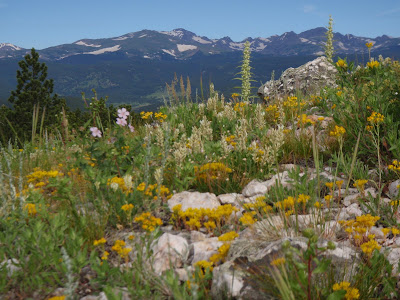 In the view above, I did take note of one flower, stonecrop, which projected the intense yellow in the extreme foreground of the photo above. I talk more about stonecrop later in this post.

We rolled through an aspen grove where Ninebark and Columbines, in tandem, glow with beauty. I have to stop and soak up this sight every time I pass through. 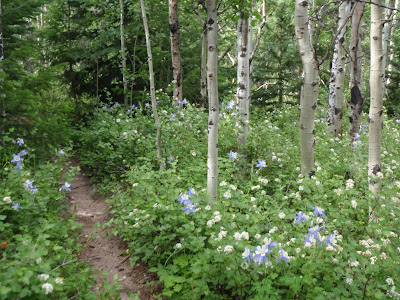 K and I relaxed in a meadow where I discovered a stash of columbines that I don't think has bloomed in past years. Columbines in the foreground, high mountain peaks in the background, and a sweet chocolate lab guarding her back - what more could a girl ask for? 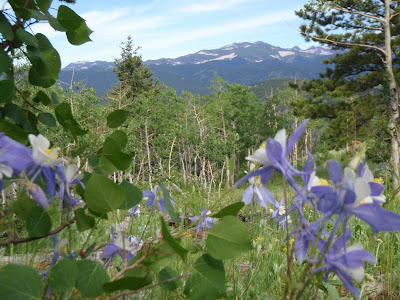 After I dropped off K, I did an intense ride, almost continuously downhill for the first half and, except a brief respite, relentlessly uphill on the way home. During the restful flatter part of the homeward ride, I followed a trail that my friend dubbed 'Wildcat Alley', a ledge trail cut into a steep hillside. Pine trees, logs, shrubs, boulders, and cliffs line both sides of the trail. As I contemplated the perfect lion habitat surrounding me, I almost ran over a massive mountain lion scat. My energy packet is in the photo for scale and is 4.25" long and 2" wide. The total scat was more than a foot long and contained only fur and bones. 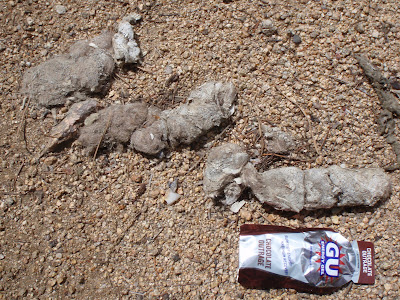 When I saw this mountain lion sign, I visualized the actual huge feline, with his long curved black-tipped tail almost dragging on the ground and his pointy cat ears, walking purposefully along the trail. He felt confident enough to deposit his scat in the best territory-claiming place - directly in the center of the trail. It was both unnerving and invigorating to realize that such a fierce animal, who towers over me in the food chain, actually stood where I found the scat sometime in the past week. Wow.

The lion scat was old enough that it didn't prevent me from enjoying the flowers as I rode. Despite the dense pine forest, blooming Waxflower shrubs (Jamesia americana) sometimes formed a tunnel. Their hordes of tiny white flowers cluster into racemes poised at the ends of the branches. 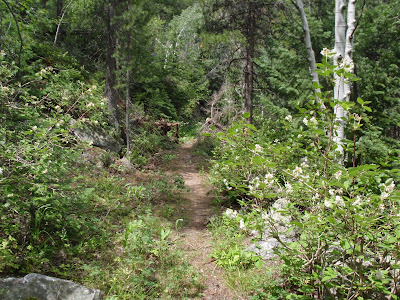 Columbines poked up through the Waxflower shrubs, painting a breath-taking mosaic. 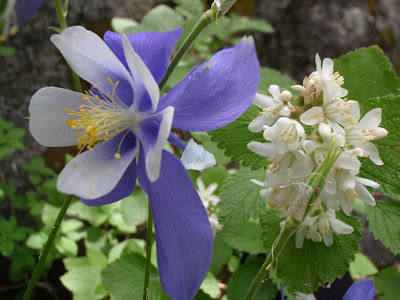 As I rolled around a curve, I saw the most obvious lion-friendly habitat, a cliff with the trail following its base and a boulder field below the trail. 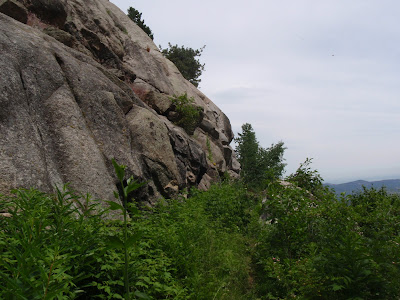 As I traversed the base of the cliff, a flash of yellow on the cliff, Stonecrop (Amerosedum lanceolatum), caught my eye. This tough little plant has eked out an existence on a tiny mat of mossy rock on the cliffside. 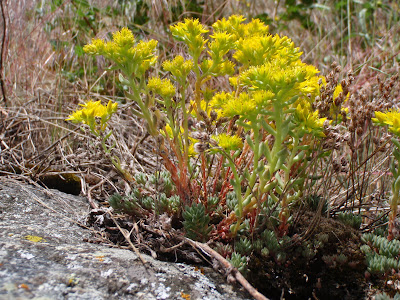 Each flower is an intricate and flashy yellow beauty with yellow fringe-like stamens projecting upward. 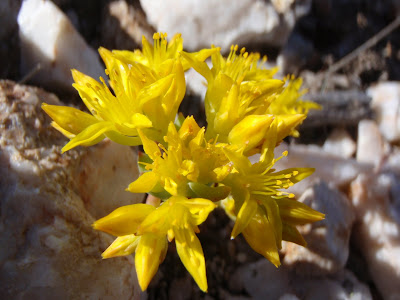 A close look at a single plant shows the succulent reddish 'leaves' hugging the stem. The 4" tall stem sprouted from an inconceivably small crack in the rocks to burst into life. 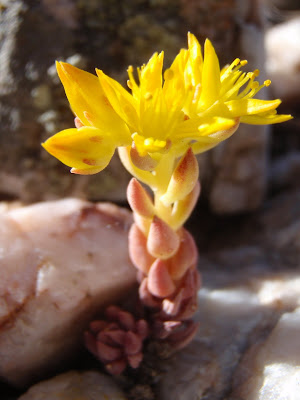 In the mosaic of flowers covering the ground now, Stonecrop is so abundant on all the dry slopes that it tinges the ground yellow.

On the last occasion that I rode today's route, more than 3 weeks ago, I struggled mightily to fight through my sadness over S's death and felt like I barely made it home. As I rode strongly today, I realized that I've begun to heal. When I think of S, although I still get that sinking feeling that I have a hole in my chest, I also smile remembering the love that he brought to all of us.
Posted by KB at 4:30 PM