Evening sun rays, almost parallel to the meadow, lit the flowers and our dogs while we practiced recalls yesterday evening. Our little black bear, R, sprinted toward me, his pink tongue and white teeth flashing in the sunlight. 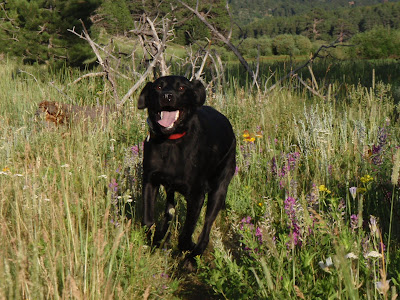 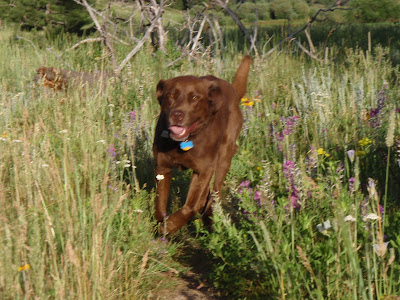 For our next recalls, the dogs galloped with carefree happy strides through a forest of Mariposa Lilies. K used her ears to turbo-charge her recall! 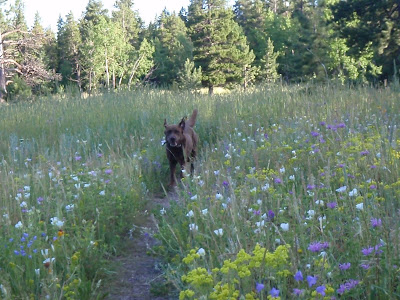 Of course, R's stride buzzed with intensity, just like every aspect of him. 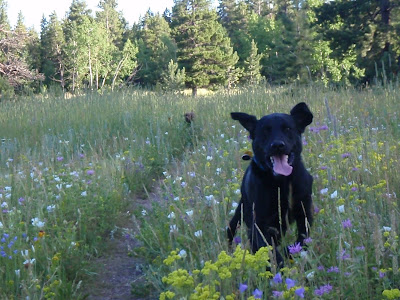 Yesterday, I noticed how mature R has become about not attempting to eat from K's bowl when their meals are at different times. This respectful behavior emerged in the past month. What a good dog he's being, lying on his bed staring longingly at K's breakfast, in the photo below. 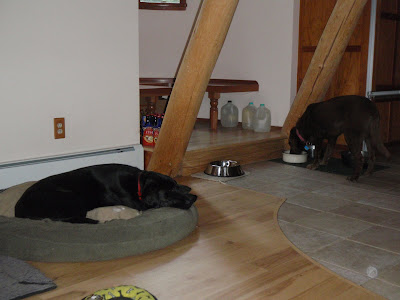 Then, today, my husband prepared both R's and K's breakfasts but K was still out bike riding with me. When my husband briefly left the room, R put his paws on a high table, leaving scratch marks, and ate K's entire breakfast. The moral of the story is that R is still wildly oscillating between mature behavior and naughty puppy behavior!

This morning dawned gray, drizzling and cold - dismal for July. Once I overcame my reticence to ride in damp air colder than 50 degrees, wearing leg warmers, arm warmers, and long-fingered gloves, I enjoyed pedaling through the forest. The horizon that usually shines with mountains was shrouded by a gray wall of clouds except for a five minute period when the mountains barely glowed through the thick fog. 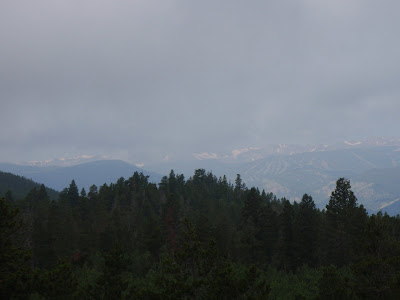 After yesterday's ride, today's seemed mellow with no exciting animals crossing our paths. K and I moved in synchrony with an easygoing bond, enjoying the forest sounds. We passed through raucous crow cawing, chickadee alarm calls, grouse wings fluttering loudly, and complete silence. As we stood together in the depths of a pine forest, we heard... nothing. I stayed a little while, enjoying the silence, feeling at peace with the world.

We spotted a patch of Black-eyed Susans decorating the floor of an aspen grove. Its eye looks like a birthday cake on careful inspection. Its pistils, the female tubes in the reproductive system where the pollen needs to be carried by pollinators, look like burning candles on the edge of a cake. 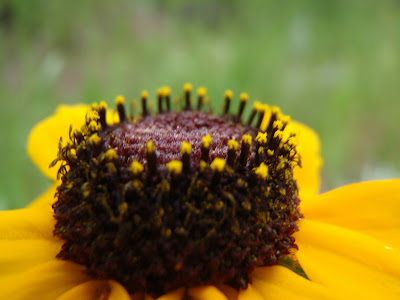 Miniscule spiders crawled on the eyes of almost all of these flowers. Perhaps they're pollinators for Black-eyed Susans? In the photo below, a reddish spider appears near the bottom and in the center of the black eye. 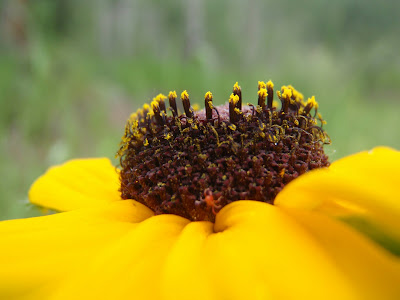 A bit later, I spotted a female Broad-tailed Hummingbird feeding in a meadow of wildflowers. She had a choice of a huge variety of flowers but solely drank nectar from Indian Paintbrush. 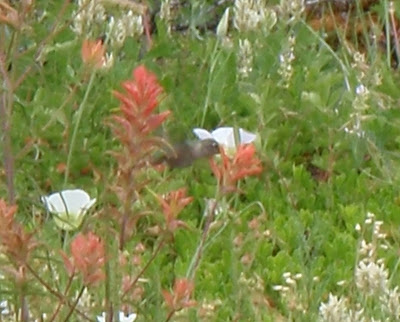 Finally, just now in the late afternoon, the sun has burned through the clouds, and the temperature has soared to 60 degrees. We may have a sunny evening hike!
Posted by KB at 5:39 PM