Our Cordilleran Flycatcher nestlings braved the night on their own last night. Mother flycatcher perched in a nearby tree. Every year, the mother flycatcher has left the chicks alone in the nest for the last night or two before they fledge. The nestlings have started morphing into miniature replicas of their parents, except for their pink beaks, unlike their alien appearance a few days ago. 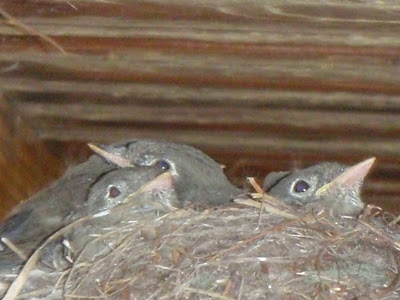 Today, both parents flitted about under the deck, frequently chirping and fluttering up to the nest to feed the chicks. I'm surprised that the young haven't yet flown the coop. They barely fit in the nest. 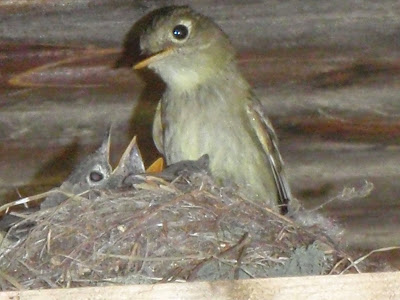 This morning, finally, I felt almost normal for the first time since my crash last week. Up until today, I've had trouble dragging my ailing body out of bed each morning, due to a headache, back spasms, aching legs, and a white-hot streaking pain in my shin. Each day, I've felt better after riding but getting started has been a battle. But, today, nothing hurt very much when I opened my eyes. Never take that gift for granted.

K and I enthusiastically rolled into a sunny and gorgeous day. 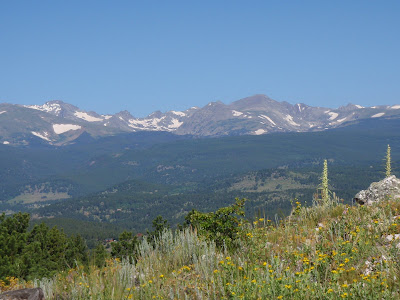 We stopped in a meadow, where I noticed a surprising montage of Blanket Flowers, a bumblebee, and a grasshopper. 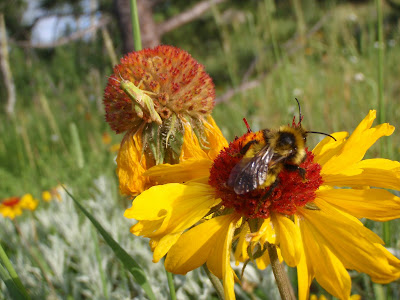 In the foreground, the fuzzy yellow and black striped bumblebee monopolized the fresher of the two flowers. 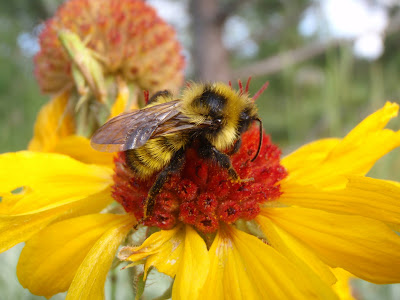 While the meek grasshopper sipped from the older, almost dessicated, blossom. 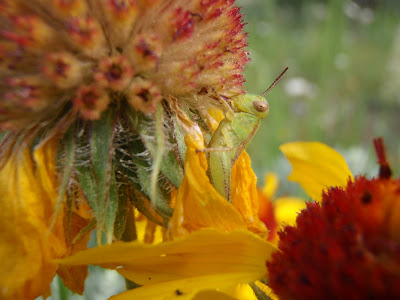 As we pedaled further from home, K seemed to sense my brimming energy and zoomed, zig-zagging from one side of the trail to the other. She seems fully recovered from leptospirosis, although she still has another 10 days of antibiotics ahead of her. Her brother, R, has now come down with the same symptoms as she had so he's starting the regime. Those were some costly slurps from a mud puddle that both dogs took.

As K and I energetically rolled along, she abruptly halted and sniffed a log with trepidation. Someone, I'm guessing a bear, overturned a log, exposing a swarming and swirling colony of angry ants. The log roiled with frantic activity, and the angry hexapods climbed up to my ankles while I tried to take a photo between swats at climbing ants. By this point, the sage K had retreated to 20 yards away from the unhappy colony. 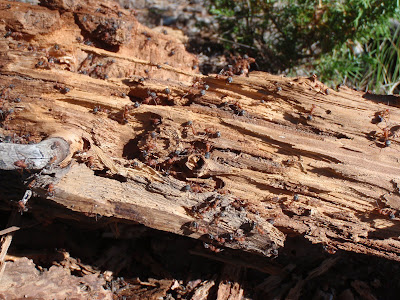 I'm always happy to see evidence of our bears foraging like the wild ursines that I want them to be, rather than exploiting naive humans who leave food accessible. So, despite getting ants on my ankles, I was happy!

After K ate her breakfast, I headed out for more pedaling. I followed my favorite climbing route, one where the trail parallels a creek and climbs arrow-like through wildflower adorned meadows to a lookout point. I climbed hard, enjoying the feeling that my body didn't hurt. And, what a view from the deserted lookout! 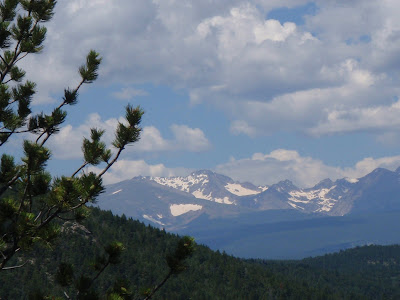 Clouds had begun to organize into storm cells over the mountains as is their habit in the summertime but none had swelled into towering columns or turned black. That meant that I could enjoy a leisurely finish to my ride.

To get home, I rode along a slightly uphill route carved into the side of an almost vertical wooded slope. This trail, Wildcat Alley, is where I've seen many animals signs over the years, include scat and tracks of lions, bears, and pine martens. Although I remained alert, I didn't see any large animals today - but it's always exciting to imagine that they saw me ride by.

I passed a spring, still flowing freely below a cliff. Numerous flowers specialized for moist sunny spots flourished. A Monkshood (Aconitum columbianum) grew aside the spring, its purple blossom hanging at my shoulder height. 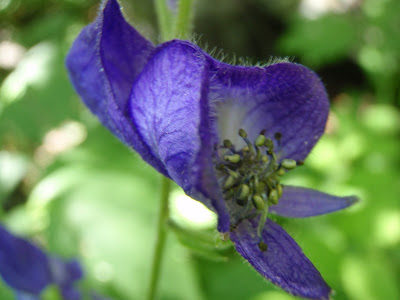 This view is from below the blossom, showing the view of a visiting insect, without the special effects of insect vision. 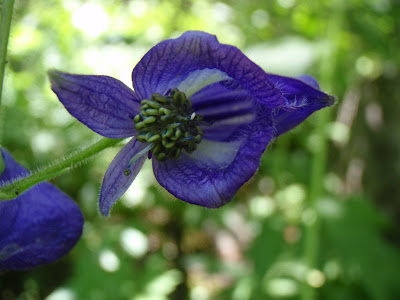 At a slight distance from the cold clear water, yellow flowers towered over my head. 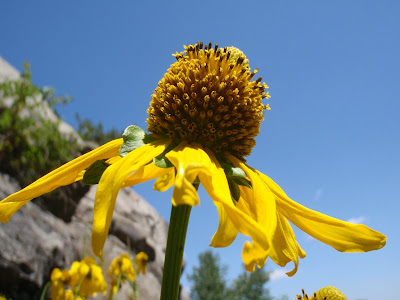 I believe that they're Tall Coneflowers (Rudbeckia ampla). 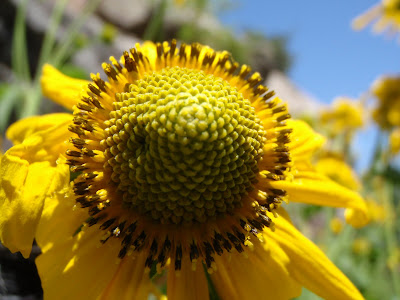 And, best of all, wild raspberries shined like bright red beacons. I settled in to forage for these sweet and tiny treats. I kept watching for lions and bears, who might amble along and stumble over me in the depths of the tall growth. But, truth be told, if a lion decided to hunt me at that point, I'd have been in big trouble. Sometimes, I just have to relax, trust the animals to leave me alone, and enjoy summer's bounty.
Posted by KB at 4:55 PM