K and I explore

True summer speeds by at our elevation so I'm trying to immerse myself in its warmth and bounty. K and I hope to hike up near the Divide tomorrow if the thunderstorms abate. But, for today, I pedaled and she ran through our forest. As we rolled past an imposing rocky prominence, I realized that we'd never scrambled to the top. So, I dropped my bike, and we started picking our way to the top. I carefully chose my route to avoid the sheer walls that I couldn't have climbed. K followed me closely, and we finally emerged to see blue sky and mountains. 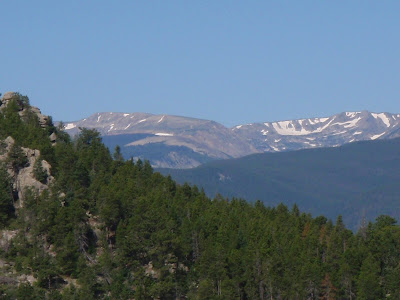 The rocks dropped of precipitously to the west so I kept K close. She panted like a locomotive in the strong sun. I think that her squinting eyes need doggles (doggie sunglasses)! 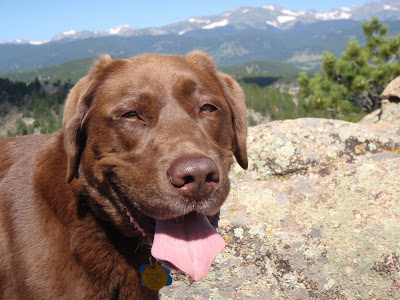 I soon started to cautiously wend my way down through the boulders and cliffs but couldn't remember the easy route that I'd found while climbing up. I slid under a young pine tree and K stayed stock-still at the top. 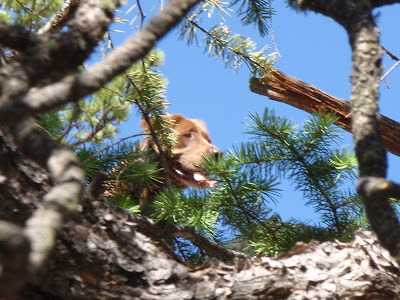 Next, I barely squeezed between two boulders. K stood at the top with a look telling me that she had no intention of following my route. 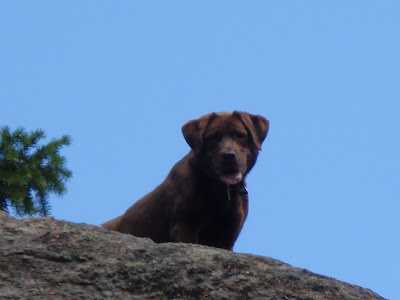 I pondered what to do. K can get scared to the point of complete shut-down when asked to negotiate tough obstacles. However, that's during agility training. For example, it took two years for K to decide to walk across a teeter-totter (even now, she's eternally so proud of herself that she'd play teeter-totter all day if I'd let her). For about a year of that time, she wouldn't even go within 15 yards of the teeter-totter.

However, as I looked up at her this morning, I realized that she'd never been scared by natural terrain. She's always easily negotiated boulder fields and even single-log bridges high over creeks. In fact, in the woods, she always moves with a natural confidence peppered with a dose of suitable caution. So, I kept descending, thinking that she'd find the 'easy' route that I'd used to go up. She still didn't move. 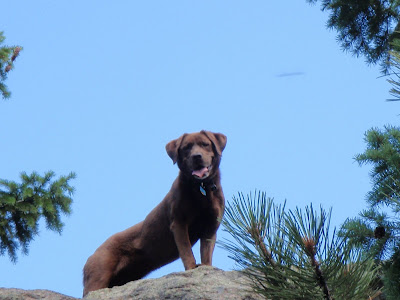 Uh oh. Now, I started considering climbing back up to lead her down. First, I tried one more trick, disappearing behind a boulder despite my niggling fear that she'd leap off the cliff to get to me. R would leap but all my past experience said that K wouldn't. Sure enough, she trotted down to my side in about 5 seconds by the least technical and very gradual route we'd used on the way up. Whew. What a smart girl. I'm not sure why she posed so long on top of the cliff, unless she was angling for some statuesque photos.

As we rolled toward home, K skidded to a stop to sniff a scratched out depression that annihilated my tire tracks that I'd left only 30 minutes earlier. Bobcats, lions, and coyotes all scratch dirt into small piles, leaving shallow holes, to mark their territories. These carnivores prefer to make these scratchings in prominent locations like the middle of a trail. I found a small piece of scat, probably from a bobcat, in the dirt pile. As I checked it out, K's nose dropped to the ground, and she purposefully trotted off into the forest. Her calm purposeful demeanor suggested that she was running late for an appointment with the bobcat. I called her back and had to laugh. We humans and dogs are so different in some ways. But, I love that K makes me notice animal signs that I'd otherwise whoosh past without a second glance.

In the interest of full honesty, K insisted that I confess that I cussed at her later in the ride. I was riding down a very technical trail that I can barely negotiate even when I tunnel every iota of my attention into seeking the easiest line of travel. K chose that moment to streak off like a predator after prey, pulling my eyes away from the trail and to her. I yelled for her to come and simultaneously lost control of my bike. Sometimes, the combination of keeping an eye on my dog and riding on trails exceeds my mental bandwidth. That's why K wears a bell but it's not foolproof. Fortunately, I managed to avoid a full fall but it scared me since my spine is still recovering from my last crash. As I felt the vibrations reverberate up my spine after landing hard on my feet, I cussed K, not loudly, but just barely audibly. Moments like that one test my zen abilities but, seconds later, I managed to find a happy tone and give her treats because she returned to me pronto when I called her.

After leaving K at home, I rode some more on my own as the clouds gathered, organized, and swelled over the mountains. I spotted a colony of new flowers invading an aspen grove where columbines ruled just last week. These plants are the antithesis of columbines. They're almost 2 feet tall, stout, and look indomitable. Despite their distinctive features, I haven't managed to identify them, except that they're probably in the Figwort family. The leaves are compound, deeply toothed, and mostly basal. Does anyone else have any ideas? 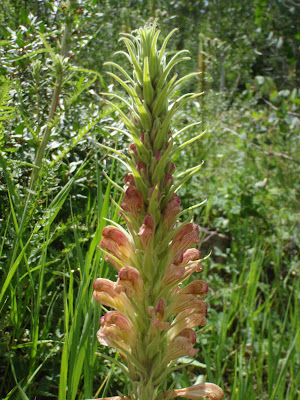 Despite the tough look of the overall plant, each blossom was delicate and eye-catching. 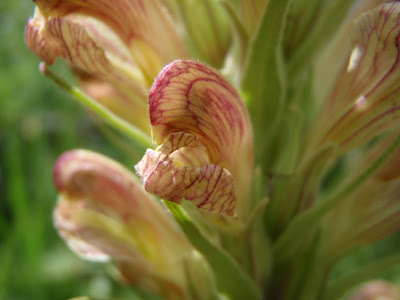 Right next to these behemoths, a fly drank nectar from a Dwarf Goldenrod. The fly loomed like a giant compared to the individual flowers of the goldenrod's raceme. It looks like pollen sticks to the fly's feet as he perches on a flower, and then the next flower scrapes off his foot dust. He looks almost too big to actually feed from these flowers. 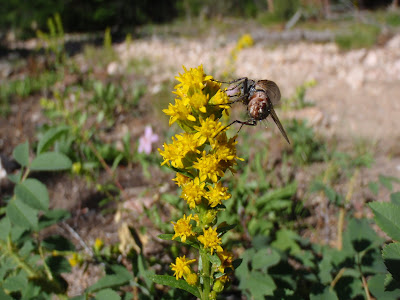 I'll never tire of the sight that greeted me as I approached home. I stopped to gaze at the green aspen leaves, craggy mountains, and billowy clouds. 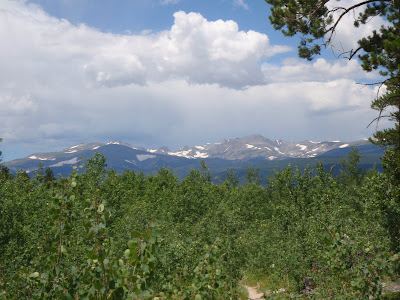 And, to my surprise, when I arrived home, it looked like the biggest flycatcher baby, who has undeniably dwarfed the others from the beginning, had fledged while the other three remained nest-bound. The parents are still fussing around the nest, and I haven't been able to see the potential fledgling in the trees. However, in past years, all the fledglings learned to fly almost simultaneously. If I'm correct that one forerunner has escaped the nest, it must be tough for the parents to balance keeping the newly-free youngster safe and well-fed while still protecting and feeding the ones in the nest. It looks like being a good parent is tough work!

And then there were three... 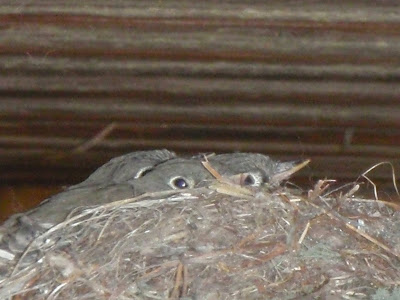