I'm having a tough day today, contemplating the most difficult decision of them all. But, as always, I went out for a spin on my bike. It soothes my soul to spend time in the peacefulness of the wilderness.

I started my mountain bike ride with my pup, K, and we gave S a frozen kong before we departed. Even now, he dives in and devours these treats! 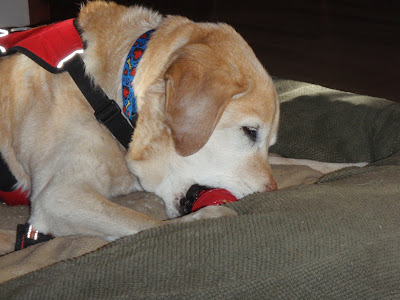 K is a sensitive dog who seems to intuit my feelings. She stayed close today, acting like my guardian angel. We rode a technical trail, and I hammered as fast as is possible on such a rough trail, feeling the spark in my legs that was burned out yesterday. As we followed the sinuous and rocky path along a hillside, we traversed pine forests, aspen groves, and finally reached a big meadow. This meadow overslept this spring. Whereas most of the local meadows awakened weeks ago, this hillside meadow only now looks like a living and growing organism. 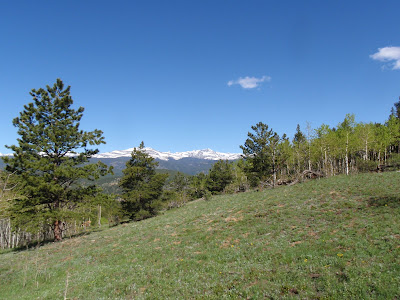 After dropping off K, I took a fairly non-technical route that also goes through prime wildlife habitat. The first wildlife that I saw was a large group of campers surrounded by several police cars and other official vehicles. I skirted the conflagration as it didn't look pleasant. However, I am glad that the officials are finally taking the abuses by campers seriously, as it's an area that's been degraded heinously by uncaring beer-fueled campers for years.

About a half mile later, I spun my pedals rapidly to climb a wall-like rise, and just as I reached the summit, I spotted a black bear, huge and close, on the trail. I stopped to let her flee because the steep hill had blocked her view of me until I was within her 'safe' space. But, she acted like a good wild black bear, and lumbered into the forest, stopping about 20 yards into the stand of pines. I snapped a few photos as she stood statuesque. 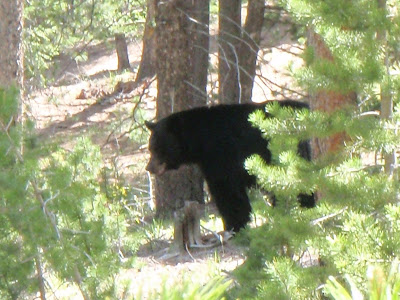 I never saw a cub so I'm not absolutely sure that this is the same bear who I saw a week ago. However, this spot is within a mile, as the crow flies, of where I saw the sow and cub. 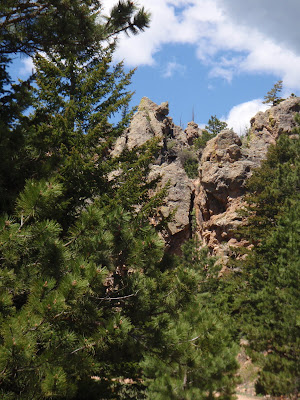 During the few moments that she stood still, I noted her shiny long fur, big claws, and powerful build. She looked healthy. She then galloped deeper into the pine forest, out of my sight. I scanned everywhere, including the treetops, for the cubs before riding on. I always worry about angering a sow by getting too close to her young but I never felt afraid today.

I think that I must be a 'bear magnet' this year - I don't usually spot bears in the wilderness so frequently. I love seeing them so I'm not complaining!

I'm in a worrying mood - so I have to admit that I contemplated whether the absence of cubs was related to the nearby police activity. I sure hope not.

I headed down to the creek-side gulch where I spotted the bear last week. I rode hard, until my breathing and heart seemed so loud that I wouldn't have heard if a rockslide had started above me. It felt cleansing to burn off some of my anxious emotion and to feel the power flowing from my legs.

On a whim, I took a sharp turn and rode a trail that steeply climbs the north face of the gulch to a beautiful meadow. Officials closed this area to motorized traffic a few years ago, and nature is healing the wounds left by ATVs and jeeps. The double-track below was a deeply rutted road and now is like a pair of parallel foot paths. The elk clearly love the closure. Their tracks pocked the meadow everywhere I scanned. 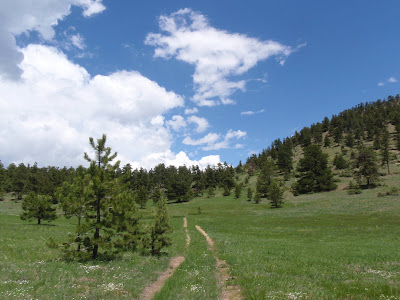 Back down at the gulch, I spotted a favorite flower. It looks so papery delicate that it's hard to believe that it can survive our storms. The photo shows a side-view that emphasizes how the stamens and pistil jut out so prominently from this Stemless Evening Primrose (Oenothera caespitosa). I believe that the 'T' shaped structures are the male stamens, topped with pollen-producing anthers. The unique filament topped with four yellowish and sticky-looking branches is the pistil (far right of photo). Primarily moths pollinate these blossoms, moving the pollen from the anthers to the pistil. I must add, however, that I'm finding that almost no flowers fit the 'typical' anatomical drawings so I could be mistaken in my explanation. If anyone can help, please do! 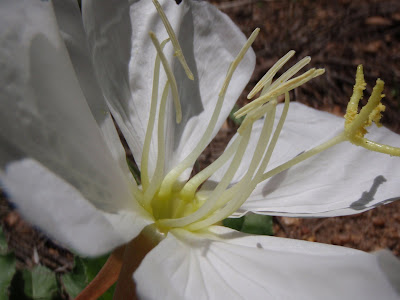 What appeared to be the same plant had both white and pink flowers. The petals of the pink beauties weren't opened wide. According to guidebooks, the pink flowers are probably the elder ones on the plant. 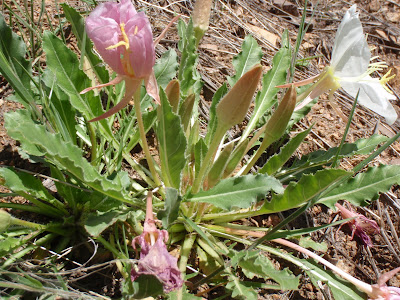 After checking out the flowers while keeping a careful eye on my back after my 'bold bobcat' experience the other day, I spun home. The mountains had metamorphosed from the placid snowy oases (shown below) that K and I rode past early this morning. 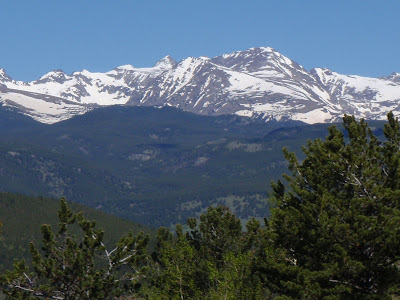 When I passed them on my way home, storm clouds loomed over the Divide. This dramatic metamorphosis occurs almost daily in the summer. As a 'cloudophile', I think it's beautiful. But, today in particular, the tumultuous and scary skies seemed to symbolize the anguish that we're feeling over what's looming so close. 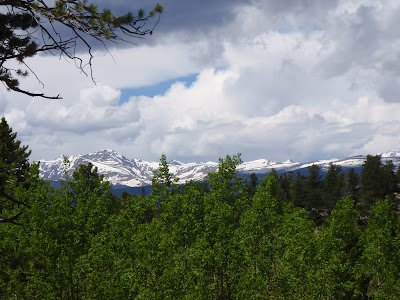