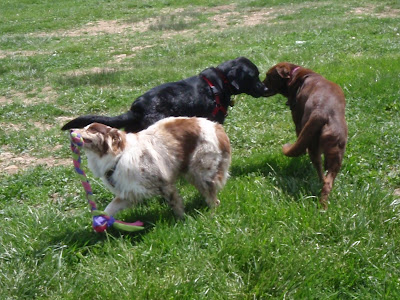 Yesterday, K, my chocolate lab, and I went to training class, held this week at a city dog park. K's nerves always go on high alert when we descend to the city. Often, I find training class to be a serious challenge due to K's anxiety, expressed as whining, instantaneous shedding, sweaty paw pads, and hyperactivity when any human focuses on her.

Yesterday was different. For the first time in five years of attending class about every other week, K remained stationary and calm in a down-stay when the trainer approached and petted her. Both the trainer and I almost yelped with surprise. But, the next three times that the trainer approached, K's response remained solid and calm. Wow. The magnitude of this breakthrough is probably lost on anyone who has a naturally calm and confident dog.

Moreover, when I ran my fingers through K's fur, it didn't fall out in tufts. Instantaneous shedding is cited by dog behaviorists as a stress response. So, keeping her fur intact was another sign that K felt more confident than usual.

The final, very surprising event, was that K intervened when a huge, usually implacable, Malamute decided that playtime was too unruly and started correcting younger dogs while making scary noises. Usually, K would shrink behind me in this situation. Yesterday, K approached the Malamute four times during his meltdown. Three of the times, she touched her nose to him and wagged her tail low and fast in a happy greeting. One of the times, she rolled on her back and wriggled, scratching her back on the grass. It wasn't a submissive roll but looked like a message to him to 'lighten up'. Oh how I wish I'd had my camera ready for that sequence.

In the photo below, the Malamute's human told him to sit and stay although the other dogs in class were running free and playing. Despite sitting, his tail stuck up dominantly and his posture looked tense. His head and eye position made it look like he was considering a correction. But, K approached with a low submissive posture and he simply acknowledged her. I've never seen her be so courageous. The final time that she approached, he nosed her in response. 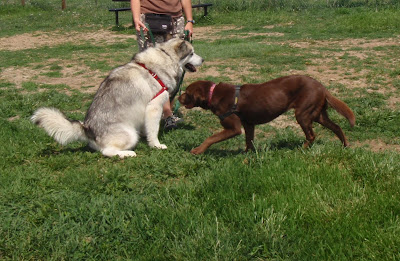 The bottom line is that K's confidence is higher than ever, perhaps due to our recent upward nudge of her thyroid medicine. I'm so happy to see her looking relaxed and finding the courage to confront scary situations. I've always taken these seemingly natural behaviors for granted with my past dogs.
Posted by KB at 3:14 PM