Meeting a black bear and her cub on the trail

I rolled out to a cool dawn today with remnants of fog lingering from yesterday. I had a busy morning ahead so K ran with my husband instead of joining me on my bike ride. The mountains glowed purple behind the light green baby leaves of an aspen, a magical reminder that the sun had just risen and spring has begun. 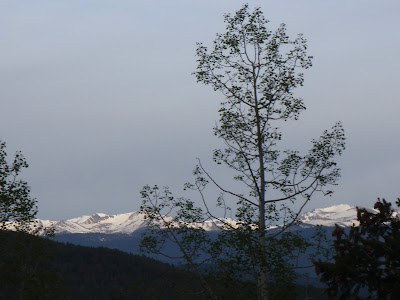 As I passed this mountain view, two mule deer pranced along parallel to the trail, as if they'd decided to go for a run with me. I love the bouncy and energetic gait of deer. 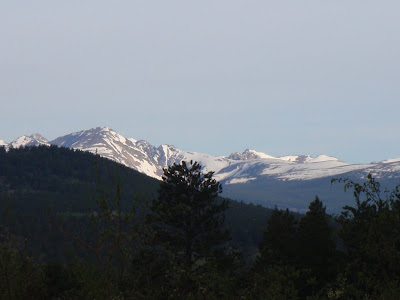 The sun had arced high into the sky by the time I arrived at the base of a gulch. I climbed along side a creek bustling with life. The water-loving trees have fresh leaves rustling with migrant birds. In the spring, I see birds along this creek taking rest stops on their arduous journeys to breeding grounds. Often, I'll see a species only once so I never identify many of them.

Today, a hulking shiny black bear and her cub browsed along side the creek. Thrilled, I immediately stopped to watch from a distance of 50 yards or so. In the first photo, mama bear dominates the vision but a close inspection of the left side of the 4wd road, just behind a pine branch, reveals a chocolate-colored form. 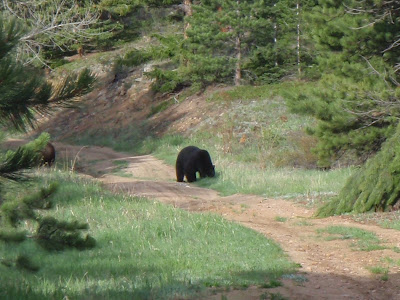 If you couldn't pick out the cub in the photo above, compare it to the next one. The chocolate cub, well-trained by mama bear, immediately scrambled down to the creek to the left of the road. Mama continued eating, unperturbed, but the cub vanished. 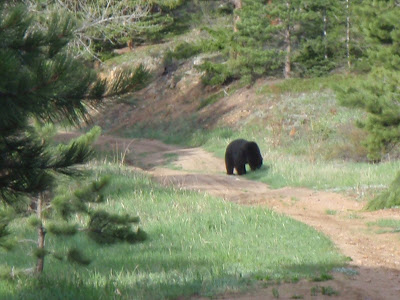 As the sow continued to ignore me, I started worrying about whether she was guarding another cub who was perhaps lagging behind his mama up the hillside to the right. Since I was downwind of her, it occurred to me that she might not have noticed me yet. I decided to make noise to warn the sow so that she could herd her cubs to safety. First, a cough and then a 'hello' evinced no response from this implacable sow. In fact, she turned her rump toward me and pretended I didn't exist as she munched the plants. 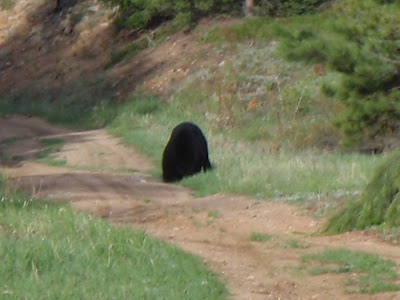 I stood and watched her for a while longer and even took a few steps in her direction for a better view. But, I needed her to move eventually. Finally, I yelled 'hello' about four times, even louder than before. She turned and lumbered toward the creek. She shot me a look and snorted. In bear language, this explosive noise was an obvious warning. She then ambled down into the creekbed, remarkably quietly despite her bulky body and the tangle of small trees and shrubs lining the water. 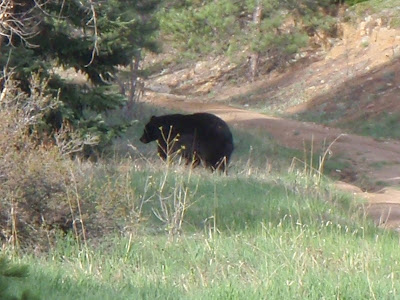 I still didn't feel home-free because of the specter of a second cub dawdling on the hillside to the right of the road. So, I stood still for a while, waiting to see if a cub followed her. After a while, I hiked up the hillside, trying to gain a lot of elevation before crossing the bear route to minimize the odds of accidentally stumbling between mama bear and an inattentive cub. Although I didn't see a lost cub, I continued giving the bears a wide berth, gazing down upon the spot where I'd initially spotted them. 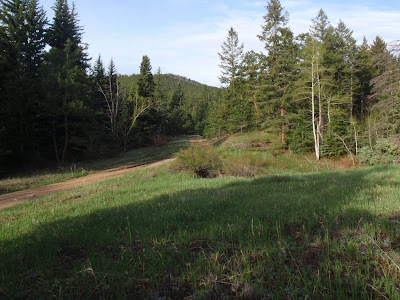 I gawked at the densely vegetated creekbed that they'd entered so silently. In my previous bear encounters in the wild, the bears have immediately fled into the forest with the sound of breaking branches and cracking shrubs broadcasting their paths. Of course, none of those bears traveled with cubs. I suspect that cubs completely change the bear's behavior. 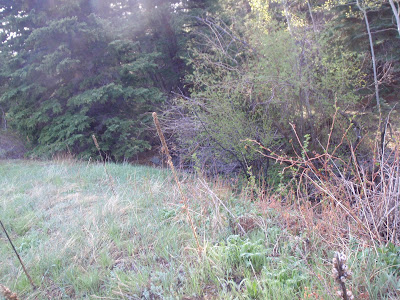 I'm not sure if the cub that I spotted was a 'cub of the year' or a yearling - my view was too fleeting. Bears mate during the summer but the embryos don't implant in the uterus and start growing until the sow enters hibernation. Even then, the embryos develop only if the sow has piled on sufficient fat to support them. The sow gives birth to 1-3 cubs during hibernation, and the cubs nurse while the sow sleeps. The cubs stay with mom, learning how to make a living for 1.5 years, through the next winter's hibernation. Sometime during their second summer, a black bear sow abandons them so that she can mate again. Apparently, one strategy for the painful abandonment is for the sow to send her cubs up a tree but then she flees while they're perched up high. At that point, the cubs are on their own and start the hardest passage of their lives, searching for their own territories and learning to care for themselves.

Based on how calm the mother bear seemed today, I'd guess that the cub was a yearling, entering the last month or two of his mother's tutelage. But, I don't really know.

After seeing the bears and skirting their location, I finally continued pedaling up the gulch, feeling like a very lucky person to have met a bear and her cub as they foraged in nature. I thought about the fact that I wasn't even vaguely worried about the bear following or stalking me. If I'd sighted a lion who seemed so nonchalant about my presence, terror would have been my companion for the next couple of miles. Today, a feeling of wonder carried me up the hill and along a winding path through an aspen grove. 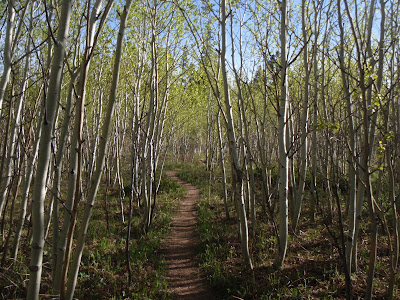