Dogs know how to relax. R slept in the sun before running this morning. 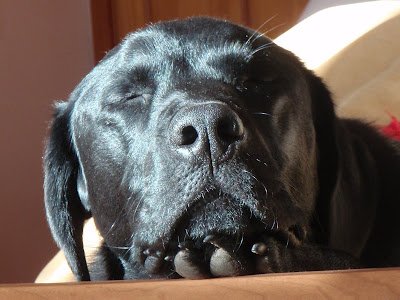 After pedaling into the forest on my mountain bike, K and I headed directly up high, to Hug Hill. Bright purple seed and pollen cones adorned a small Douglas Fir tree on the summit. 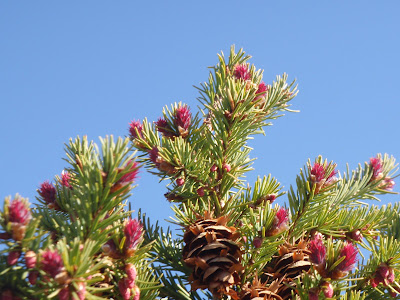 Although Douglas Firs are not 'flowering' plants, the nascent cones reminded me of flowers. 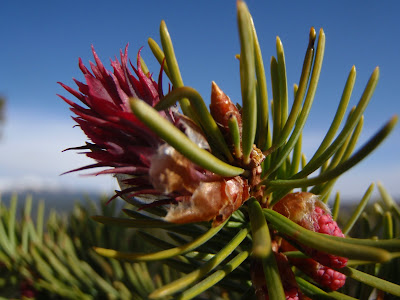 As I noticed the details of the cones, a wild animal clattered down the scree slope just below us and on the forest edge. I caught a glimpse of a tan hulking animal. Most likely, we caught a snoozing elk who decided to make a sprint away from us. The elk have spent recent days clustered in the shade of trees in a nearby meadow. When the animal fled, K charged a short distance, snarling and barking. She slid to a halt when I told her to 'Leave it' but stood guarding the summit. 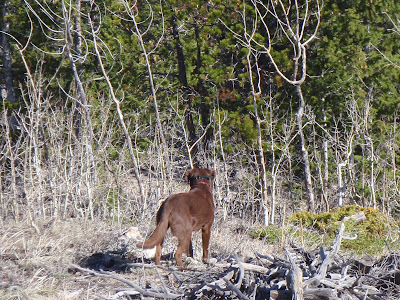 I wonder how long the animal had watched us before making a run for it. Freezing is the best way to hide in plain sight. Try it some time - if you're just off the trail or a road, stand perfectly still as someone goes by. They'll rarely notice you. I know - I use this strategy when I'm riding trails that cross private property. As a 'local', I have permission from many landowners to ride trails that traverse their forested properties. But, I don't want anyone to see me and then possibly explore the trail. If an owner finds a torrent of people using their trail, it's likely to be shut down, even to 'locals'. So, I freeze and people unknowingly pass close by me. I feel like a cat on the prowl as I stand in the shadows.

After Hug Hill, we headed in same general direction as the fleeing animal, so K remained on high alert. She'd suddenly charge into the woods, barking menacingly, and return to my side when I called her off.

Her protective behavior might have been related to signs of bear activity. I noticed fresh bear fur on the 'bear back-scratching tree'. Since last year, either a new bear has adopted the tree or his fur has bleached out because the fur today was blondish-cinnamon, whereas last year, the new fur tufts were jet black. In the photo below, the ~3" long fur strands blew in a stiff wind so that they stuck out almost horizontally and a shaft of sunlight illuminated them. Several tufts like this one adorned the bark. 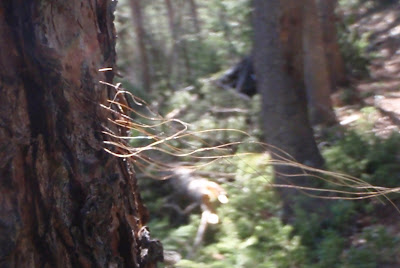 We climbed a rocky outcropping to see the mountains at the end of this trail. 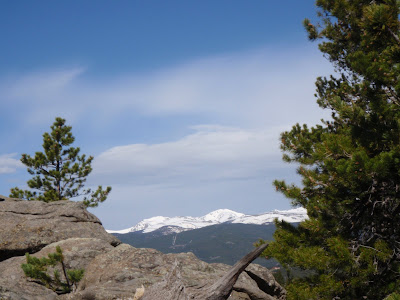 K climbed the rocks to sample the scents flying in the wind. 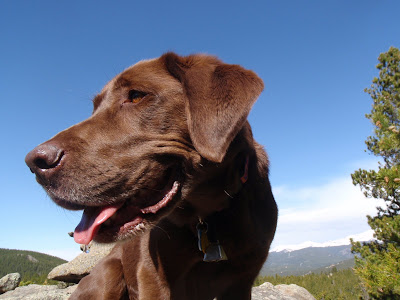 High on a ridge, I spotted a new blooming flower that I think is Lambstongue Groundsel (Senecio integerrimus). 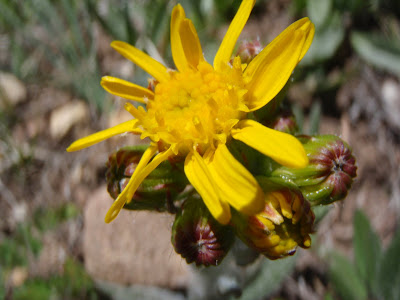 Next to the blooming plant, a cluster of nearly opened buds encircled by woolly leaves sat ready to bloom. Spring is surging forward. 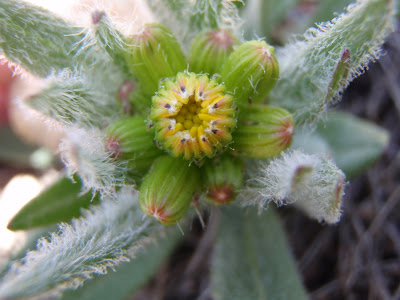 Wild animals, new blooming wildflowers, mountain views, and a chocolate lab companion - another glorious ride in the forest.
Posted by KB at 4:55 PM