A fire, an oasis, and a unique columbine 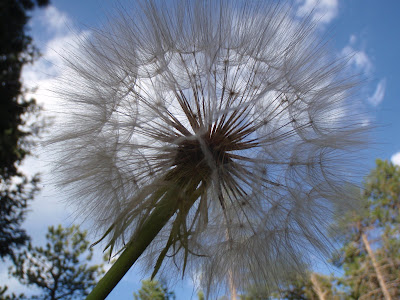 Dull aching legs awakened me last night and niggled at the edge of my sleep for the rest of the night. I'm paying the price, in referred pain, for my crash yesterday. It's a familiar pattern. Tweaking my spine doesn't usually cause immediate pain. Rather, later, when the inflammation around my spine starts, I realize the damage. In this case, my leg muscles seized into achy cramps due to pressure on my spinal cord in my neck. So, yesterday's crash must have tweaked my neck, leading to swelling overnight, and left me achy and lethargic this morning.

After living with severe spinal pain for years, I've finally completely absorbed the lesson that lying still, a hard-to-resist option when I feel bad, is the the absolute worst thing to do. Instead, I need to move. The best case scenario is that doing something like riding my bike makes me feel better. Or, sometimes, like today, motion maintains the status quo by keeping things from getting worse - with the added benefit that being in the woods makes me happy.

We started our morning with a hybrid bike/run for the whole pack, with K seeming like she's improving rapidly from her antibiotics. Unfortunately, we arrived at the trailhead to find illegal campers. We've been ignoring this problem for the past two months but today both sets of campers had driven across sensitive terrain, off-road, to camp. That was the proverbial last straw and we called the sheriff.

To my surprise, a loquacious deputy just called to thank us. When he arrived on the scene, the deputy found that the departed campers had set a huge pile of slash aflame and abandoned it. No fire ring, no signs of any safety consciousness - perhaps even deliberate arson. The flames were 4' tall, licking high enough to scorch surrounding pine tree trunks, and had spread to 10' across in a stiff wind. Fire crews doused it before it spread further but it was dangerous. The Deputy wanted to prosecute those campers but my attempted photo of their vehicle, taken surreptiously, was too blurry to help with identification. What a disappointment - I wish that we could nail them because they could've burned a lot of precious forest and homes.

After our hybrid bike/run, I kept my promise to get lost every Saturday. My goal is to learn new trails, find new glades, climb new mountains, and soak up the beauty of new wildflower meadows. I succeeded on all counts today, and I even forgot how much legs ached for a brief time.

I followed a trail that wound like a serpentine through a Lodgepole Pine Forest. 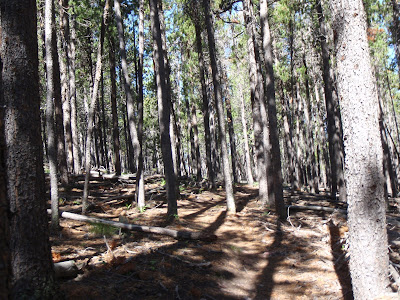 The dense forest seemed mired in a vast shadow but shafts of sunlight illuminated small patches of wildflowers. A spotlight fell on a brilliant blue penstamon, a ubiquitous flower now, but it looked like an apparition in the dark glade. 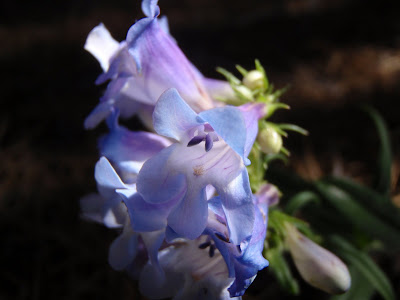 After rambling through the shadowy forest, I hit an abandoned mining road that climbed like an arrow inexorably toward the sky. The vision of sunlight shining above the forest drew me upward, and I stumbled upon a serene meadow with riotous wildflowers and visible snowy mountains. 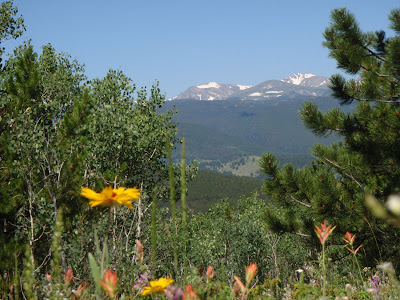 Stonecrop, a brilliant yellow, mixed with purple, blue, and pink flowers. What a show nature has given us this summer! 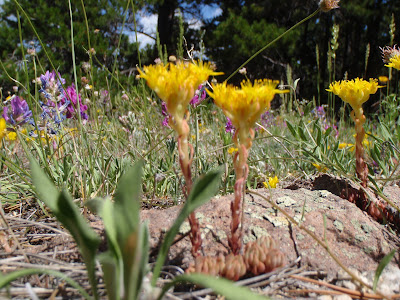 Above the wildflowers, the views awed me. 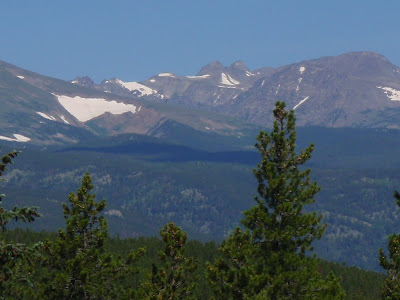 After finding this oasis, I headed straight home, past my usual haunts. In a columbine grove, the last bud just opened. 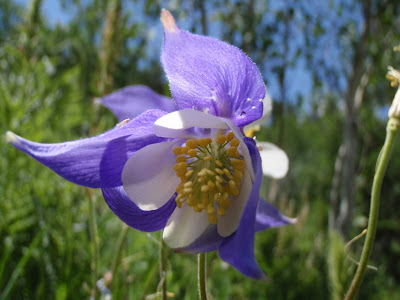 The spurs, trailing behind the flower, curled like a Big Horn Sheep's horns. I've never seen a columbine with this intricate pattern. 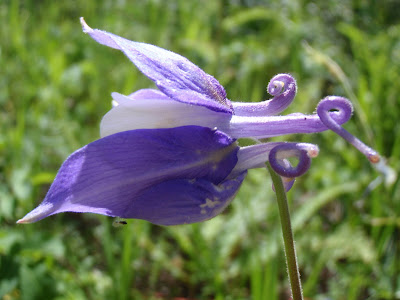 I rolled home, having enjoyed my journey through the forest, although my legs still ached like ghosts had sledgehammered them overnight. Hopefully, with the help of my super-duper anti-inflammatories and muscle relaxants, my legs will brim with energy tomorrow.
Posted by KB at 4:45 PM