We've returned to the familiar forests and mountains surrounding our home, enjoying observing the animals and plants that I know so well. Astonishment accompanied me as I scanned the area just after arriving home. I've never seen such an explosion of plant life. While the grass and plants sparsely littered the ground before we left, some grass now towers to my shoulders and a full mosaic of flowers colors the world. The wild roses have more blossoms than ever before. 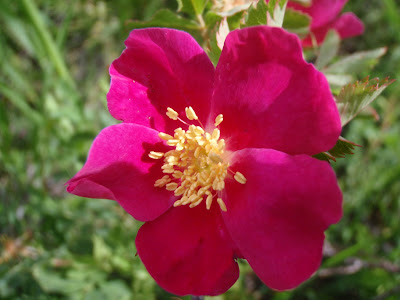 In our meadow, I can't see the dogs porpoising through the green sea until they're almost bowling me over at the end of a recall. 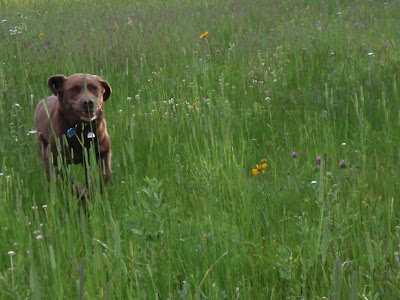 A plethora of flowers are in full song. 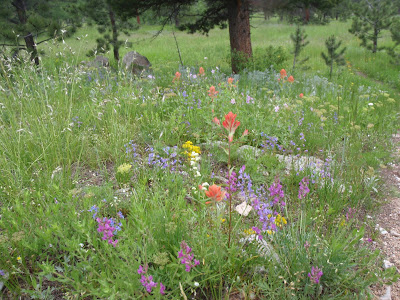 While we were away, I expected that more wild animals than usual might have visited our territory but I was wrong. A brown-colored black bear sniffed under our bear-proof bird feeders one night and was photographed by our wildlife camera. 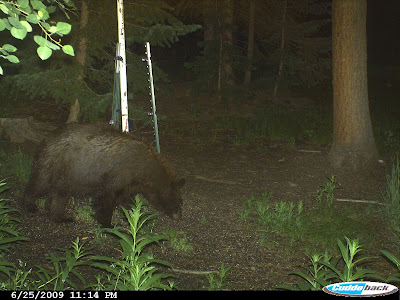 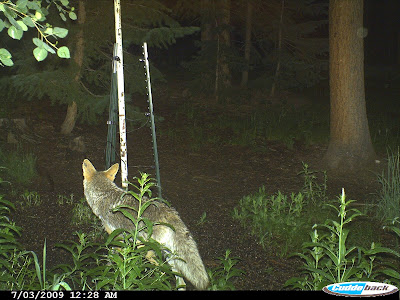 Since arriving home, K and I have explored the forests and meadows on our daily rides. Yesterday, we plunged into the forest shortly after sunrise. We climbed above the trees to Hug Hill to see the peaks still bathed in sunrise lavender. Lots of snow melted while we were away! 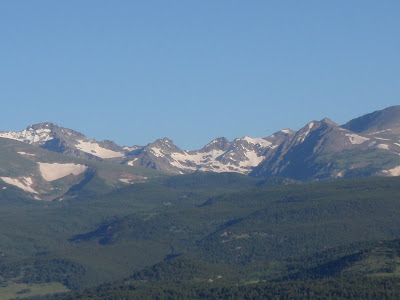 Today, R joined us on our bike ride, spicing up our routine with his high voltage energy. That boy amazes me - his energy could power the entire state of Colorado! Here, he licks his chops while galloping at full fury on a recall. 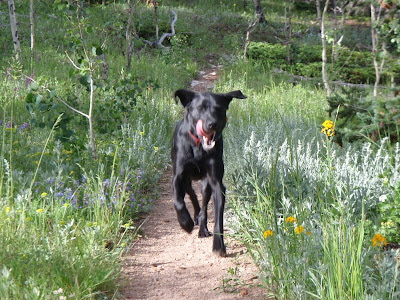 I think that K enjoys having her insane little brother with us. His spirit helps her to break out of her ultra-responsible mode and act like a playful puppy. They chase each other through the pine trees and meadows, sometimes being more mischievous than I'd prefer. But, K normally worries too much so I think that R is good for her. This morning, he and K held an impromptu pose atop Hug Hill. 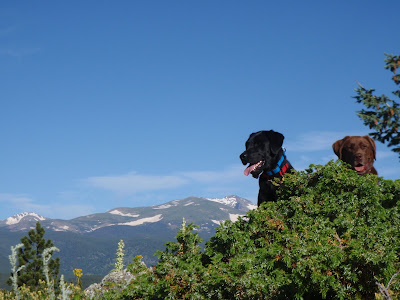 I observed interesting interactions between K and R during our vacation that strongly reinforced my conclusion that K has remained the head of the pack despite the upheaval caused by S's death. On one occasion, R curled up in the softest spot among the sleeping bags. K eyed him sternly without making a sound or even looking menacing. He promptly moved aside to let her lie in the lap of luxury.

While on vacation, I read the first half of Patricia McConnell's 'Tales of two species'. She points out that, in dog-dog interactions, the dog who remains still and stern receives the most respect. The frenzied dog who barks wildly, often with a high pitch, while nervously fidgeting or wriggling receives little respect. I realized that, in the past, when R has frazzled me with his crazy high energy behavior on our bike rides, I acted like an underconfident dog barking wildly at him as I repeatedly called him back to my side. So, today, I tried to act like a confident but almost silent leader. This approach made both me and R feel calmer, and the bike ride felt almost serene compared to some of our previous ones when R joined us.

Today, we wove our way through aspen groves with riots of flowering Columbines and Ninebark shrubs. K closed her eyes and looked like she reveled in the scent of Columbine. 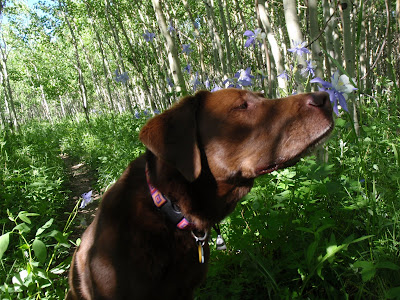 Columbines and Ninebark seem to like living side-by-side. I'm not certain what kind of Ninebark this is but my best guess is Rocky Mountain Ninebark (Physocarpus monogynus). 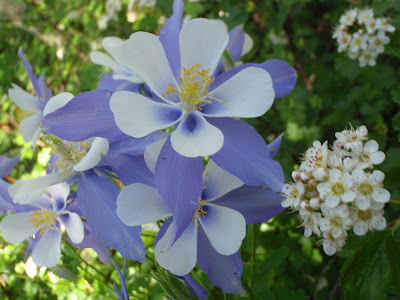 One cluster of Ninebark flowers had a jewel nectaring on it, a ladybug. Ladybugs have inundated our meadows and forests, bedecking almost every plant with their bright red spotted bodies. My guess is that our pluvial weather has allowed them to flourish. 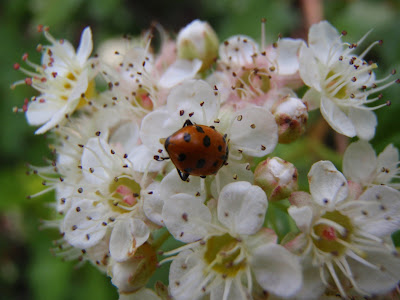 I feel lucky to return home to a beautiful area that I love so much. Summer is in full cry here and I'm savoring every moment. At our high elevation, summer bursts to life and proceeds at a furious pace before cool weather resumes so be sure to get out and enjoy it!
Posted by KB at 3:55 PM