Yesterday afternoon, I checked the infrared wildlife camera that I have set up on a east-facing slope above the meadow in a spot where I've seen myriad bobcat signs over the years.

As I checked the images, it became clear why the bobcat checks this spot regularly. Rabbits hang out here. 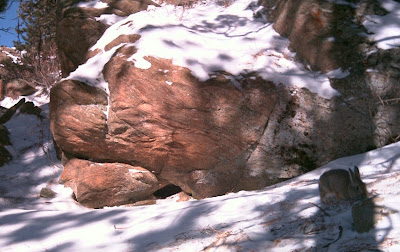 In fact, the bunnies come and go from a hole beneath the boulder. Compare this photo to the one above. Do you see the difference? I laughed and laughed at the 'peek-a-boo'! If you click on the image, the trickster's cute face shows up more clearly. 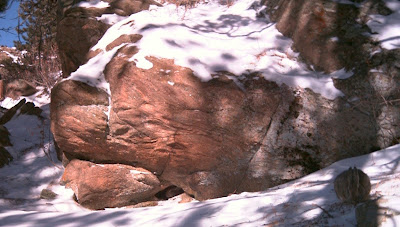 The next night, our ferocious looking feline visited. When I see a wild cat, one of the first things I check is tail length. If it's a short stubby tail, it's a bobcat (or lynx, but they're not in my area). If a long slender tail trails the cat, it's a mountain lion. No doubt, based on the tail, size, and coat, this feline is a bobcat. 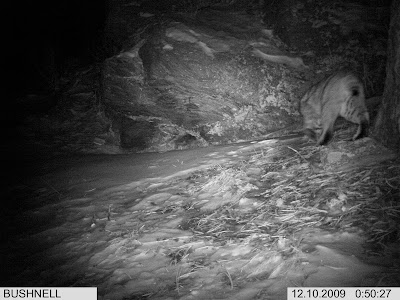 My camera is set up to take three photos in row whenever something moves in its field of view. The next photo was a few seconds later, and the cat had moved toward the boulder. 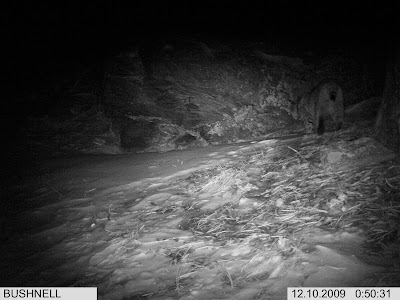 Then the third in the series shows the cat starting to move along the base of the boulder, where the rabbit den entrance hides. 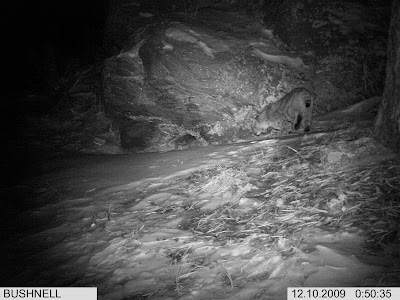 Here's a zoomed in view of the stocky bobcat from the photo above. He looks so muscular and healthy. 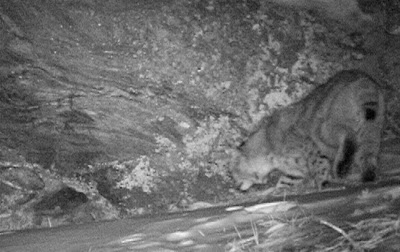 Then, inexplicably, my camera took no photos for the next 2 minutes. I'm guessing that the bobcat stayed around the site for those 2 minutes (it's programmed to take photos almost continuously while there's an animal in the field). The final photo showed the hind end of the bobcat as he departed. It's not a great photo - but I think that it gives a hint that he's a male... I'll let you reach your own conclusions. 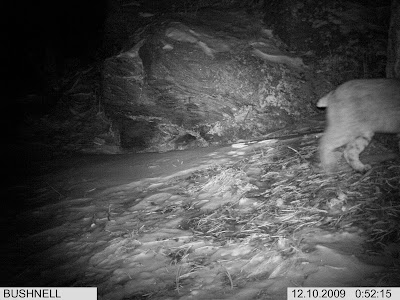 Based on this series of photos, I decided to move the camera closer to the boulder. The infrared flash will illuminate the bobcat better, and perhaps the sensor will trigger when he's at the base of the boulder. He left fresh scat there so I know that the camera missed some 'action'. I'm still learning how to optimize this camera's performance. However, so far, I don't love it. The night-time images aren't great, and it doesn't always take photos when I think that it should.

On the plus side, it is achieving my goal of learning whether my interpretations of animal signs like tracks and scat tend to be correct. In this case, the camera has affirmed my long-term guess that a bobcat visited this spot regularly. Once I feel more confident in how to optimize the camera's performance, I have other places in mind for checking my animal tracking skills.

This morning, the pups and I headed out on touring skis under gloomy yet beautiful skies. 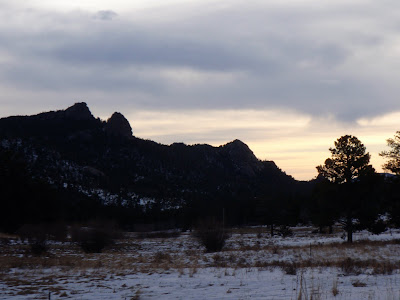 I started with a very long recall, at least 100 yards across the meadow, to give the dogs a training challenge. I left the duo in a sit-stay. I had some trouble convincing R to assume the sitting position, and K gave him the big-sisterly 'look'. 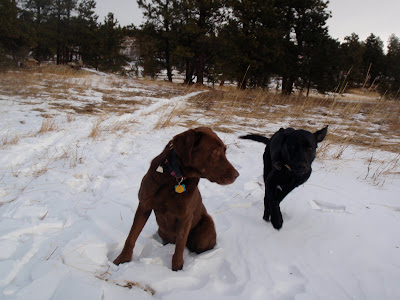 Once R settled into a sit, he held his stay during my seemingly interminable ski away from them. The photo below shows the middle of the recall. The duo started on the other side of the trees, out of my sight. R is in front... he always starts a recall by cutting off K and bumping her so that he can claim the lead position. One training book says to reward *only* the dog who arrives first to encourage a speedy recall. Well, forget that notion - K runs her heart out to get to me so she gets fully rewarded! 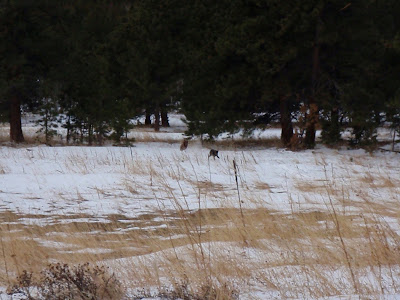 Just in front of me, R hurdled a small berm of snow. He was fully airborne. 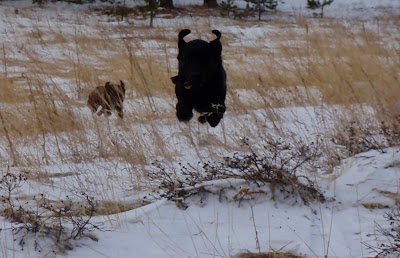 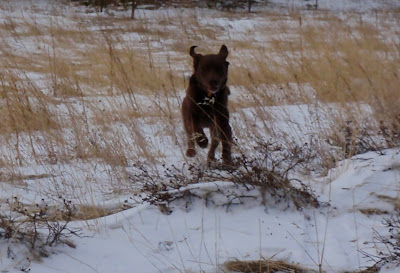 After a short ski in very weird snow conditions, I went out for a relaxed bike ride. Yesterday's hammer-fest only managed to leave me exhausted and sore. So, today, I spun easily and watched the world around me.

As I passed a meadow, I spotted a coyote trio trotting purposefully atop the snow. As soon as I stopped, one of the coyotes climbed up a tiny rise and sat next to a bush. The other two kept moving from left to right across the photo.

The sentry didn't move but the other two approached a wire fence. Then, one coyote did exactly what my dogs love to do on the hard windpacked snow. He rolled on his back and wriggled ecstatically! 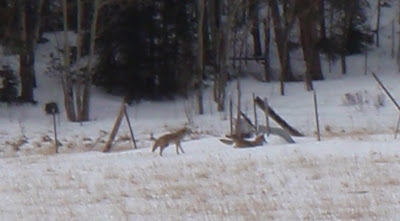 After the silly coyote regained his dignity, they ducked under the fence and kept moving. The sentinel still watched me. I decided that I better move along, before I fragmented the pack.

I kept heading west but noticed that stormy weather obscured my view of the ski slopes. 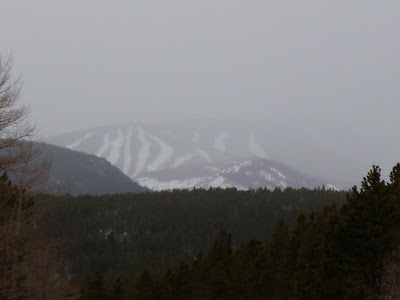 Sure enough, before I knew it, I was riding through a furious snow squall. I could barely see a thing because the snow somehow curled behind my glasses and hit my eyeballs when I rode fast. I had to keep reminding myself - "keep your eyes open"! It was terribly tempting to close them against the stinging snow. 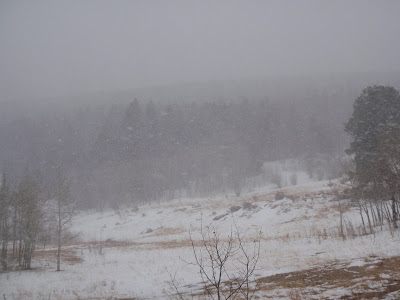 I made it home in one piece, not even too cold. I'd enjoyed my time outdoors, feeling more peaceful than yesterday.

As I rode my bike today, a story from long ago kept looping through my brain, and I finally figured out why. In college, I played Division 1 lacrosse for a tyrant coach. During one game, we were ahead of the fourth ranked team in the country by a single goal with about ten minutes to go. I had a 'free position' directly in front of the goal with no one between me and the goalie. My coach screamed at me to 'keep possession' and 'run the clock'. In other words, don't shoot to score. I scanned the field and noticed that the goalie was no longer focused on me because she'd heard my coach's orders. So, I surprised everyone by shooting and scoring. It iced the game, which we won, on our way to a 'Elite Eight' berth in the NCAA tournament.

After that particular game, I was on the receiving end of a coach's tirade of epic proportions. I'd "disobeyed orders", she yelled loudly enough for everyone in New England to hear it. I tried to tell her that she hadn't been in my shoes so she couldn't see the situation from exactly my viewpoint. Moreover, I thought that if the coach had seen the goalie from my view, she would have made the same decision. It's an understatement to say that she wasn't convinced.

At the end of my ride, I realized why that particular story had looped endlessly through my head. Right now, I'm the only one on Earth who really knows how my spine feels so I'm the only one who can make a decision about to proceed. Just like in that lacrosse game, I'm the only one who can see things from my point of view. To be honest, I kind of wish that someone else could stand in my shoes and then tell me what to do. Maybe that coach could shout some instructions... I might even appreciate it now!
Posted by KB at 3:08 PM