Winter wanderings and my spine history

It may not 'officially' be winter yet but a peek out the window or a brief foray out the door says that we're in the depths of winter. R decided that a stocking cap would help him stay warm. 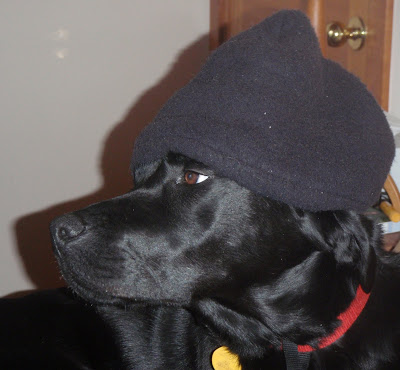 Our pack meandered around our woods last night at sunset. The wind had died down, and the forest was silent except for our footsteps. The approaching storm streaked the horizon orange and pink, with a black roof of clouds. 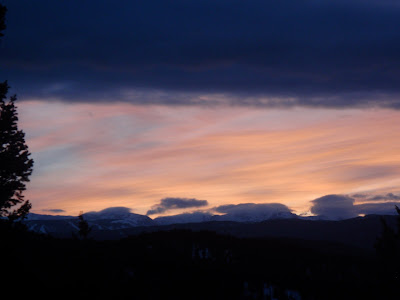 As we descended toward home, our small glimpses to the west showed that the sky had grown more brilliant. 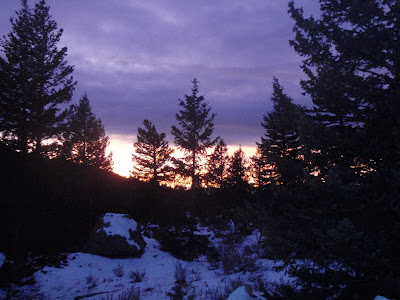 When we trekked through the meadow where my second wildlife camera is hidden, I spotted purposeful tracks of a bobcat. This track shows details more intricate than I've seen before, especially in the largest back paw pad. It shows that the front of that pad has two cusps, unlike a canine. And, the back of the pad has three cusps. The bobcat had strutted close to the camera site so I was hopeful that I'd captured a photo. Alas, when I checked this morning, only rabbit photos greeted me. 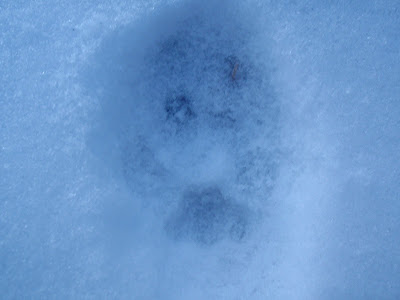 With the temperatures plummeting after the sun had fallen, I noticed Pygmy Nuthatches climbing into a hole in an aspen tree that was used last summer by Northern Flickers for nesting and by Williamson Sapsuckers the previous summer. I took the photo below in June. Check out the green leaves! 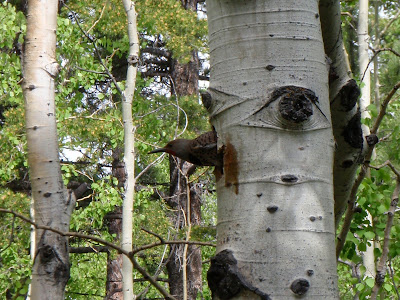 The diminutive nuthatches live in our forest all year long, and survive the sub-zero nights by crowding, wing-to-wing, into a cavity. They'll use nestboxes or natural tree holes, like this one. I love pygmy nuthatches because they're not flashy but very handsome nonetheless. Moreover, their tiny size makes me think that they're fragile but they must be very tough to survive our winter weather. The photo below is from the Idaho Fish and Game website. 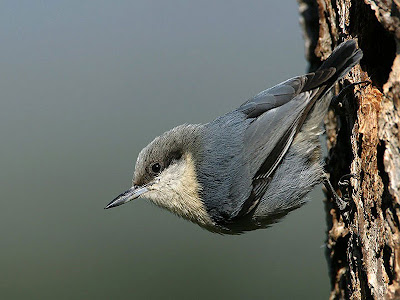 Overnight, the storm moved in. A brave coyote prepared by eating seeds and hunting rodents under our bird feeder. 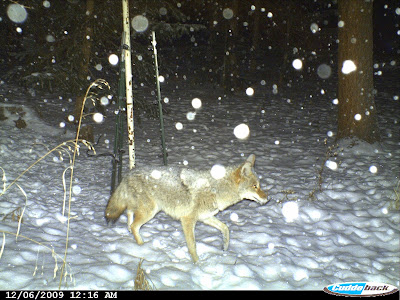 This morning dawned gray, snowing, damp, and frigid. I wore as many layers as on my recent snow bike ride in -10°F weather but I was never truly comfortable during my snow bike ride. Despite my chilled core, I enjoyed my time with K. She grew a frosty beard. 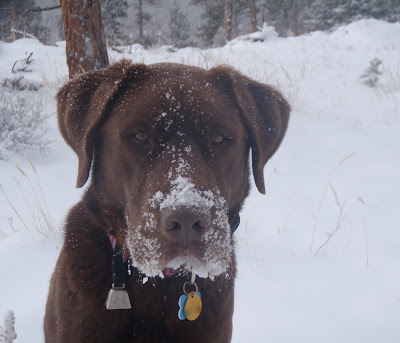 One of K's most heartwarming habits is how she guards me when I stop to take photos or work on my bike in the forest. Today, I had to stop to fiddle with a cable, and when I turned around, my faithful sentry sat a few yards behind me. K's undeniable feeling of responsibility to watch over me makes me love her even more. 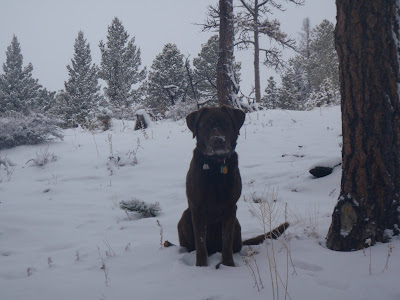 When I had a multiple discs removed and the vertebrae fused in in my low back, K was a two-year old puppy. Labradors are known to remain puppies for a long time but K grew up at warp speed during my recovery. I had 3 months when I wasn't allowed to do anything except go for short walks. No driving, no sitting in a car, no nothing. I spent innumerable hours in the company of K and our recently departed S.
When my friends asked what they could do to help me, I requested that they take K for a run, to give my high energy puppy 'fun breaks' during the day. Much to my surprise, when the first occasion arose for her to go for a run with my friend, K refused. At the outset of the run, K was off-leash and refused to budge from our house. Then, my friend put her on-leash for the start of the run but, at the first opportunity, K turned around and sprinted home. You can imagine my surprise when K's sweet face appeared at the door, all by herself. I rescinded my request, realizing that K didn't want to leave me, no matter how much fun might be in the offing.
During that time, I trained K to pick up things that I'd dropped, to put her paws up on a bench or on my knees so that I could pet her, and to lift a front paw whenever her leash got tangled (because I couldn't reach down to untangle it). She still loves doing all of these 'tricks'. If I drop something, she still comes running, enthusiastic to have a job to do!
When my vet has watched the two of us in her exam room, the vet has commented that she wished that K would allow herself to go 'off duty' sometimes. Apparently, service dogs have an 'off-duty' cue, and most of them really relax when given that cue. But, K never stops quietly watching me.
Some of you have asked how I 'injured' my spine. I never had a single event. I started having generalized back pain when I was a teenager but I assumed that it was 'normal' to have an aching back. Then, I started getting severe shooting pain down my arm, and I had my first MRI when I was very young. The doc's first question upon viewing it was "So, when was the car accident?". There never was one... 'degenerative disc disease' was my genetic fate. Sadly, both my brother and mother suffer(ed) from the same condition, although neither seems to have it as badly as I do.
In my early twenties, my lower back started sending pain down my legs. Another MRI, this time of my lower back, showed the spine of an elderly person. The docs told me to never run again, and I absolutely loved long distance running. It was then that I became a cyclist.
The doctors have told me, repeatedly, for more than 20 years that the future of my spine was very uncertain and that surgeries were probably inevitable. However, they've stressed waiting as long as possible before each surgery, and I've had at least a dozen steroid injections to reduce my pain and delay surgery. One doc said that, as soon as I had the spinal fusion surgery that he saw in my future, the adjacent discs would become like 'time bombs' that started ticking, just waiting to explode. The recent finding of a huge disc rupture in the disc adjacent to my low back fusion attests to that. Despite the risks, two years ago, the pain triggered me to schedule a fusion surgery for my neck but I ended up backing out. I decided to keep 'managing' the pain for as long as I possibly could or until paralysis risk became too high.
The bottom line is that nothing that's happened recently should be a surprise to me. However, somehow, it still is. I had held onto the tiniest spark of hope that my spine would stop degenerating, and I'd be able to keep doing what I love. That hope is now officially extinguished - but, I must admit that I still hold out a wisp of hope that I can delay surgery even longer. I can deal with the pain - but if the surgeon thinks that the danger of paralysis is too great, then I'll go for it.
One very kind reader asked what I wished for at this point. Funny, that question caught me off guard because I've spent my recent years learning to view spine pain as an intrinsic part of me. I accept that I have an irreparably damaged spine. I do wish to put off surgery for a few more years. But, a realistic wish is for the strength and flexibility to adapt to whatever my future holds. To paraphrase a famous philosophy: we all face obstacles and challenges in our lives but our lives are mostly shaped by how we respond to those challenges. That leads me to wish for the strength to adapt in the face of challenges, even if I lose the ability to do some of my favorite things.
The kind and warm comments of support from all of you have buoyed my spirits immeasurably. Thank you so very much. Here's to happy times and strength for all of us.

The photo below (taken in July) sums up two of my favorite things - our mountains and my dogs - and I know that I'll find ways to enjoy them no matter what. 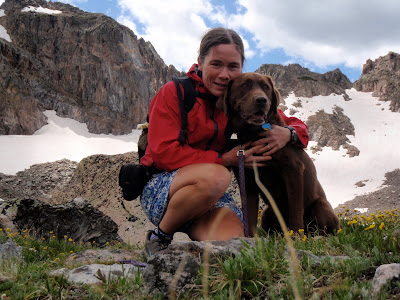