Indecision may or may not be my problem

I laughed when I read the Jimmy Buffett quote in the title a few days ago. It seemed so apropos to my ponderings about my cervical disc situation. But, indecision is definitely not my problem anymore. I've decided to get my neck fixed as soon as possible. I've consulted with two more spine experts, who asked even more probing questions than the first two docs, and they both expressed strong opinions that this surgery is not optional.

So, in the face of a hurdle in life, what do we do? Emulate our dogs and leap the obstacle. 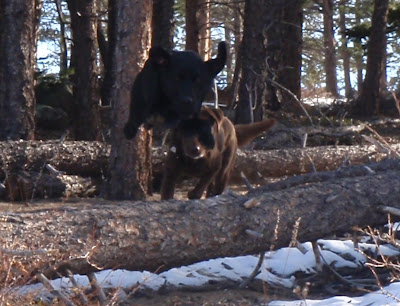 One commenter, NinjaPonyDad, referred to R as an "ICBD - Inter Continental Ballistic Dog" based on a recent photo. I think he's found a perfect nickname, although it is a mouthful to use in everyday conversation!

Then, K emulated R, but she didn't get quite the air that he did! But, she had glowing snow crystals enshrouding her - a gorgeous sight. 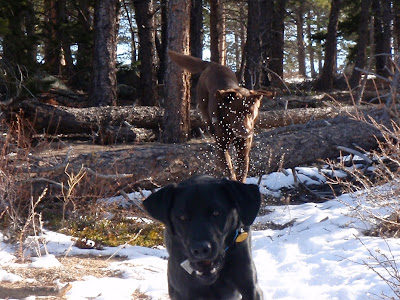 Today, on my snowbike ride with the pups, I felt primed to seize the day. My snowbiking days for this season are numbered so I'll make the most of the ones that I have. As we started out ride, we met the local dog pack led by their human. They were an eight-dog pack today, with one visiting pup. Not all of them are in the photo frame but K is in the center and R's head barely peeks into the frame from the bottom. R was hovering under my legs. 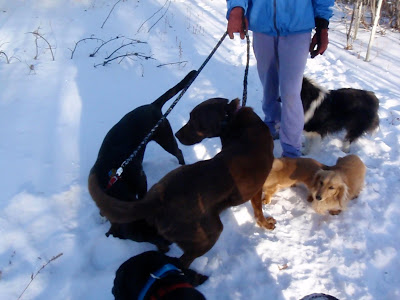 One thing has become clear. When K's little brother is with us, she's no shrinking violet around this pack. K went out in front and took the brunt of the little dogs' frenzied mobbing. Today, when everyone had calmed down after the initial greeting, R actually emerged from hiding under my legs to interact with the dog pack. 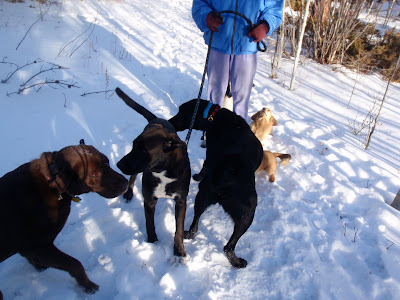 The visiting member of the dog pack was a 5 month old Lab and Pit Bull mix. He was sweet and polite. I wanted to steal him but he already has a good home. Does he remind you of anyone we know? 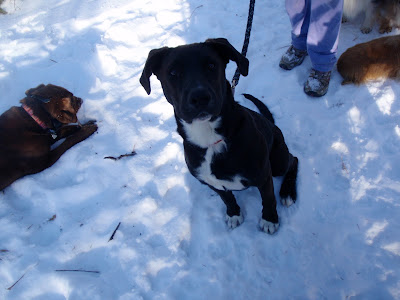 As soon as we rode away from the pack, K and R went berserk, releasing nervous energy in a flurry of wild playing. I love that they have each other for play and that I can watch their complex interactions. This particular interaction was pretty simple - tug of war over a stick! 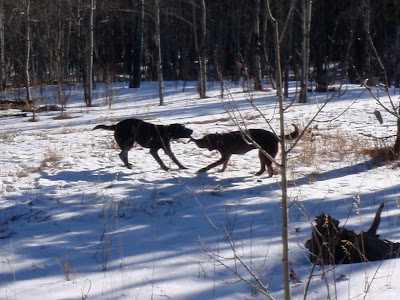 After I dropped the dogs off to snooze at home, I decided to 'go for it', riding my Fatback snow bike and investigating whether various snowbound trails were passable. I was beyond surprised with how easily I negotiated 4wd roads and singletrack trails with stupendous views. 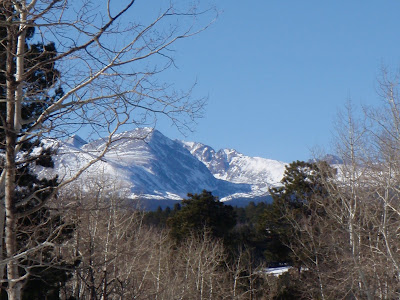 Some of the routes were boot-packed and very bumpy. I didn't care - I was in the forest, exactly where I wanted to be. 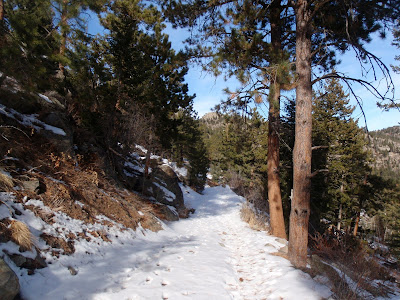 After churning my way through the forest, stopping to examine myriad animal tracks, and completely losing track of time, I headed toward home. As I glided down a slope, I caught a unique glimpse of the mountains that I love. 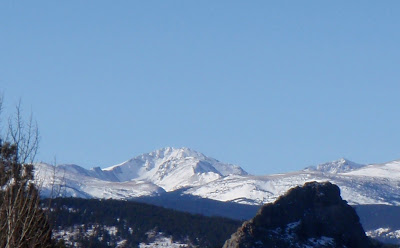 I'll admit, I don't constantly feel content about the decision to fuse my neck that's been forced upon me. I'm like a cauldron of terror mixed with a dash of optimism. My hope is that, as my mind accepts this decision, the optimism will gradually drown out the terror. Today, my consciousness was dominated by one thought: "No matter what, I'll find a way to do the things that I love". For those who follow my blog, no further explanation is needed.
Posted by KB at 4:30 PM