A vision through the forest

From K's viewpoint, the biggest disappointment of having chronic pancreatitis is that she can't have a variety of treats. So, even if Pepper hadn't eaten the two milkbones left by our FedEx delivery guy yesterday, K still would have missed out on a milkbone. Milkbones are on the forbidden list. I follow the vet's orders about K's diet like my life depends on it - after all, K's life might actually depend on it.

But, she is allowed to eat fruit. Today, we did a common trick with an exotic treat, a banana slice. With the patience of a saint, K waited while I took her photo. She was cross-eyed and drooling but the lack of light hid those details! 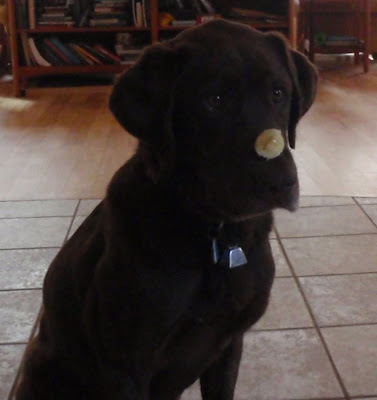 When I released her to do the trick, she tossed the slice into the air. 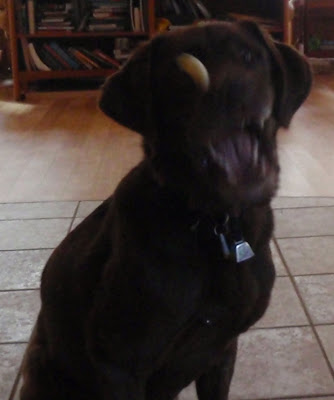 And, she snagged it. Sorry about the blurry photo. I can't use the flash when my camera is in 'rapid-fire' mode. K and I both love this trick. What fun! 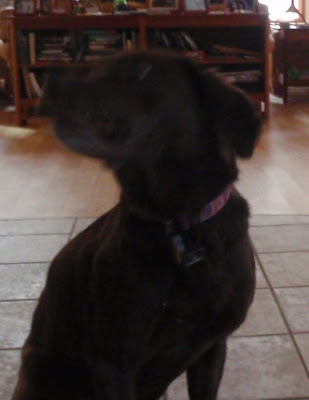 I bet that many of the dogs reading this blog have mastered this trick. But, I bet that they've never done it with a banana slice!

This morning, I took both pups for a snow bike ride. We mainly played, as the windpacked snow was still a disastrous surface for riding. This is the longest period of lousy snow riding since I got my Fatback. It has to turn around soon.

Finally, our stunning mountains shined in all their glory. I haven't seen the full range in what feels like forever. Today, the day dawned sunny and clear, with the glittering white mountains standing tall to our west. 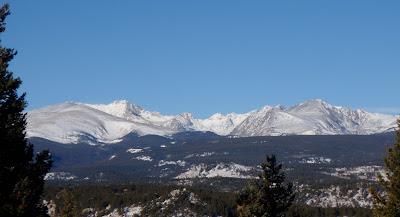 We took advantage of the blue skies for a dog photo. Just as I pressed the shutter, R reached his nose skyward, drinking up a scent whooshing past in the wind. K looked embarrassed - her little brother wasn't behaving like she wanted him too, yet again! 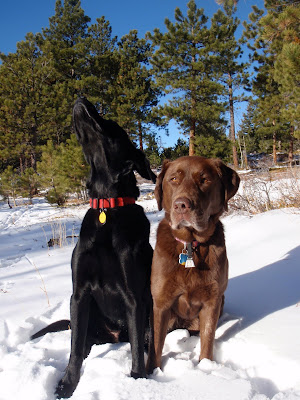 He finally looked in my general direction but his vacant look and elevated nose gave him away. His focus was on something far more interesting than me. I never found out what it was. 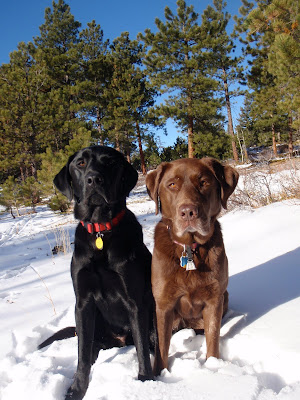 Along our route, I decided to play the hide-and-seek game. Both pups were out ahead, and I snuck up a hill. They sprinted back along the trail, stopping at the point where I'd left it. They scurried back and forth a few times. Below, R searched for my scent in the air. 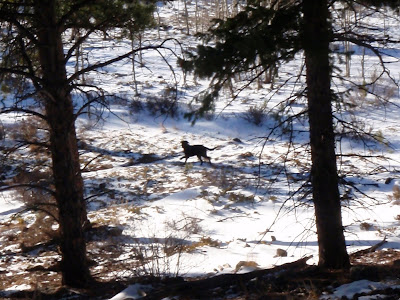 Then, at the same instant, both of them picked up my plume of sweaty human scent. They sprinted straight up a rocky and steep slope to 'tag' me. What a fun game! And, as one of my first trainers pointed out, it reminds the dogs that it's their job to watch me and not vice-versa. After all, the game proves that I'm unpredictable, and they might lose me if they're not careful. 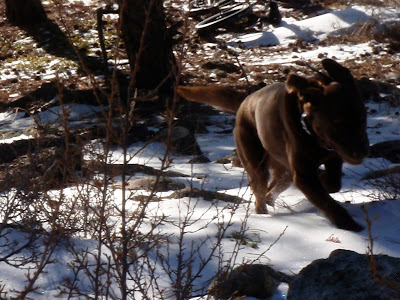 We descended toward home, and the low sun rays illuminated R's black sillhouette against the shiny windpacked snow. 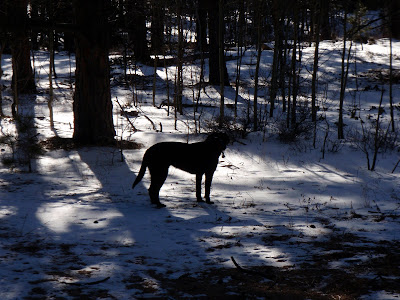 After dropping off my sleepy dogs... 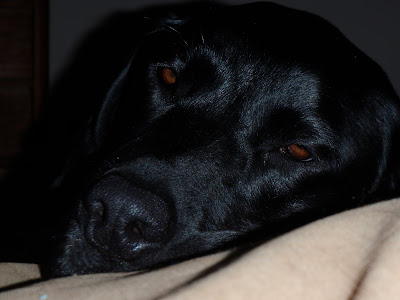 I headed out to ride on our roads. I felt mellow and upbeat, despite the relentless wind out of the west. In fact, I found myself enjoying the wind, daring it to try to slow me down. Then, when I turned around to head home, the wind was like a giant hand reaching down from the sky to assist me. I sped home effortlessly. I wish that I could bottle my attitude from today and sample it when needed. I felt happy despite everything.

When I first started my ride, I stood in the sun but clouds behind me cast a shadow over an entire mountain range.

A bit later, the sun chose one craggy peak to shine upon.

Perhaps I'm starting to see a vision of the far off future through the forest. If so, it hasn't risen to a conscious level yet but usually big decisions seem to emerge out of the misty fog with little provocation. 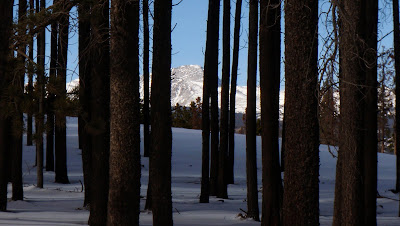