Before departing Moab, we hiked on a dome of Entrada slickrock. The rock contained ripples that looked like high-tide marks, likely left behind back when the sandstone slickrock was deposited by receding waters at least 100 million years ago. 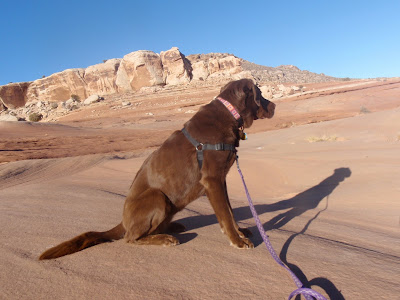 I have a very hard time understanding geology, even though I desperately want to comprehend how the domes and canyons of Moab and Fruita formed. However, I find it very difficult to visualize the three dimensional landmass interactions or the 100's of millions of years involved. Does anyone have a suggestion for a good book about the geology of the Colorado Plateau?

At the top of the dome, sun-bleached sandstone blocks sat, teetering on the edge of tumbling down the slope. Behind the blocks, the snow-covered La Sal Mountains barely peeked through. 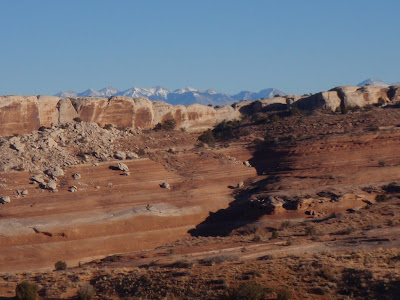 K gazed at the alien landscape while sitting next to me on the warm stone. 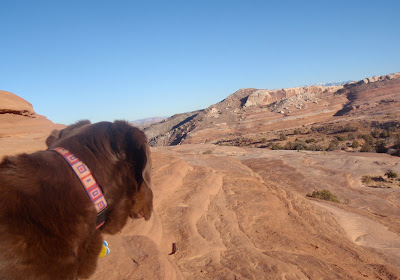 Alas, eventually the hour of reckoning arrived, and we hiked back toward the car. Although it was early afternoon, our pack cast long shadows on the slickrock. Our images almost look like rock art! 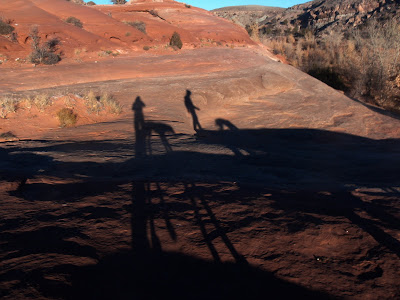 Because of my back pain, we always divide our trips into short segments. We were ultimately heading for Aspen, to meet our family for a late Thanksgiving celebration. However, we first drove to Fruita, spent one night, and took one last ride/run in the warm desert.

The trail that K and I played on in Fruita was at least 10 miles from the White Rim Trail that I wrote about the other day. However, some sections bore a striking resemblance to it. In this section, the trail followed the top of a series of undulating white cliffs. What a glorious place to ride! 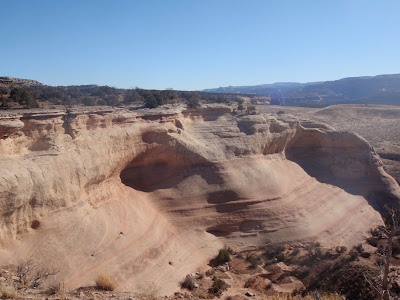 Our ride also took us 'inland' away from the cliffs, onto deep crimson soil, with overlooks to the Colorado River. 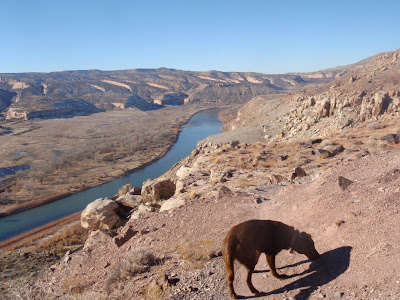 One part of the ride became very technical, and I was having an 'off-day' where my reactions seemed a split second slow. It was partly that I'd busted yet another spoke in Moab, and my front wheel wobbled from side to side with each revolution. My record for breaking spokes is getting out of control. Maybe I need to drop a few pounds! 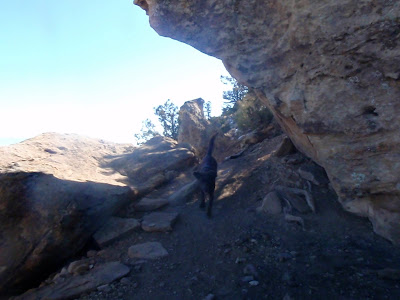 Believe it or not, this tumble of rocks was the trail. No worries - I didn't even try to ride it. However, just hoisting my bike down it was a major challenge. K didn't understand why her human was such a slow poke after she danced down it in seconds! 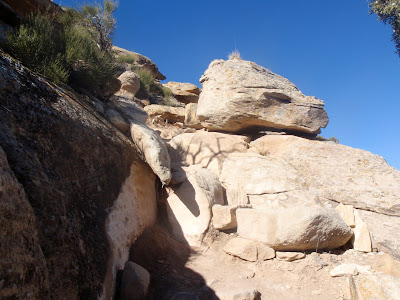 After a short ride, we started our drive back to winter, arriving in Aspen to see the ski area bustling and snow on the ground. We ate tons of delicious food, laughed a lot, and had a howling good time with our family.

The next morning, we headed up to the spot where the road to Independence Pass is closed. It's such a high pass, over 11,000 feet, that no attempt is made to keep it open over the winter. I'd brought my snow bike just for this occasion, and it didn't disappoint me.

We started as a pack, one snow biker, one human runner, and two dog runners. The dogs greeted the snow with ecstasy! They played with wild abandon. 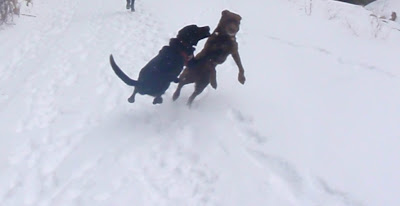 I love their body language. They both look joyous!

After the rest of the pack turned around, I kept churning up toward the pass. For a while, the only other tracks were left by a coyote. He'd trotted purposefully toward the pass within the past day or so. 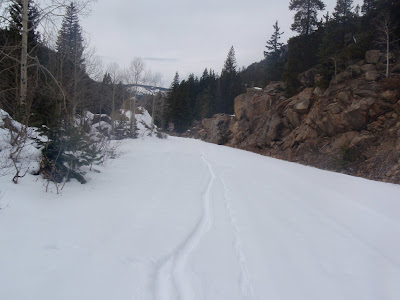 On a south-facing rock wall, melting snow had frozen into a cascade of ice. I kept wondering how moving water freezes. I can't visualize the process but the final product is astonishing. 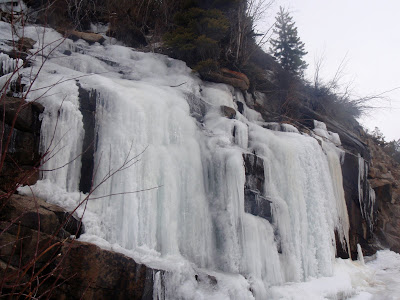 The pedaling became much tougher for a stretch where ice lay under the powdery snow. But when this mountain appeared in my view, my motivation to keep climbing soared. 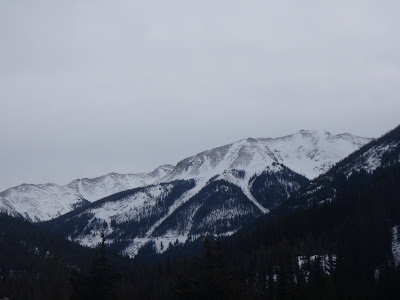 Eventually, I met snowmobile tracks (but no actual snowmobiles!) that had climbed up from the east side of the pass, probably starting in Twin Lakes, near Leadville. The packed snow made riding much easier, and I felt like I was flying toward the pass. I rode hard, striving to make it as high as possible before my turnaround time.

Alas, eventually, I knew that it was time to descend so that we could drive home. I took a short break and donned my extra clothes for the downhill. 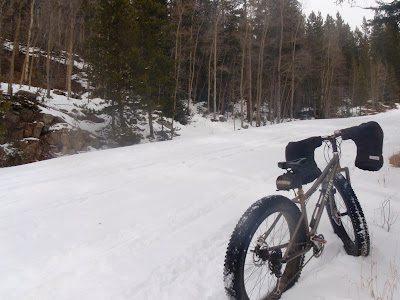 At the beginning, I felt euphoric as I flew down the packed snow. Mountain ranges spread out on the horizon, and I rode easily toward our van. However, I soon realized that I should have packed extreme winter clothing for the never-ending descent. I'd worked up a sweat while climbing, and I was paying a serious price as I gradually froze. By the bottom, I was shivering so hard that I could barely hold the handlebars. I hopped in our van and sat directly in front of the heater (to the dismay of the comfort-seeking dogs). Soon, I was warm again. I love our van's propane heater.

We visit Aspen regularly to see our relatives, and I'm planning to summit Independence Pass on my Fatback on a future winter trip. That would be an amazing experience!

We headed for home, satisfied with a vacation that showed us the extremes of our region, from deserts, to rivers, to slickrock. I wished that scary things weren't waiting for me, like my spine situation, but I'd managed to have a very fun time before dealing with them. That seems like a victory!
Posted by KB at 4:12 PM