The winds ravaging our forest relaxed today. On cross-country skis, the pups and I headed up to see if the mountains finally glowed through the clouds. The pups zipped around me like high octane turbo charged dogs. It's a joy to watch R, a dog at his absolute physical prime, romp through the forest. 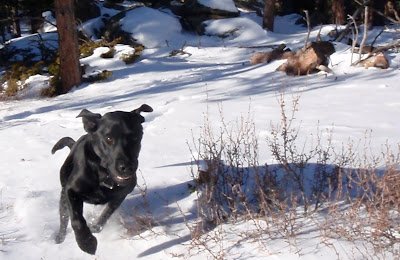 As the duo sprinted, their floppy ears flapped in sync. 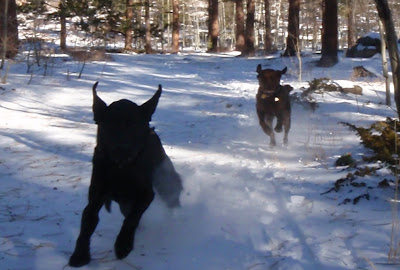 When we arrived at a lookout, the sparkling mountains shined on the horizon for the first time in almost a week. 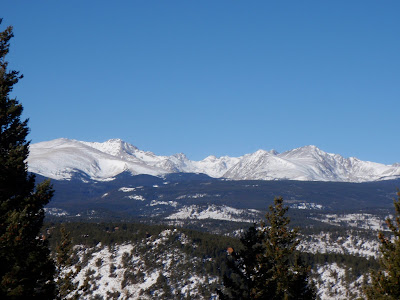 The crazy pups managed to calm their nerves for long enough to let me take their photo. R appears to be pondering something far too sophisticated for me to understand. 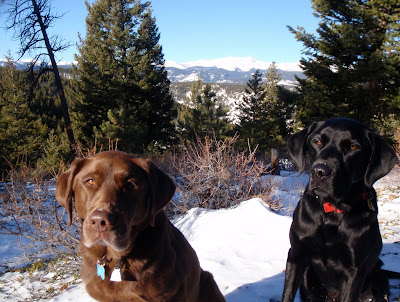 Then, we headed back to shelter of the forest, where snow drifts rather than scoured earth, dominated. Snow drifts are far preferable for skiing!

K and R continued their raucous frolicking. I love seeing them so happy. 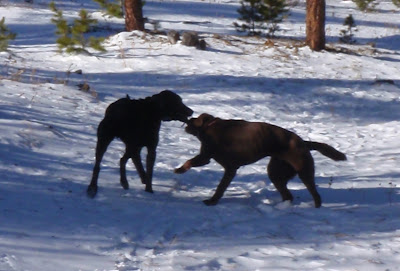 Then, a lone dog named Pepper appeared on the trail, with no humans in tow (unfortunately, this is not an uncommon occurrence in the rural mountains). R led his canine buddy to me for a greeting. I've been told that our dogs and Pepper play well together so I thought that I'd lead Pepper back to my house and call his humans. 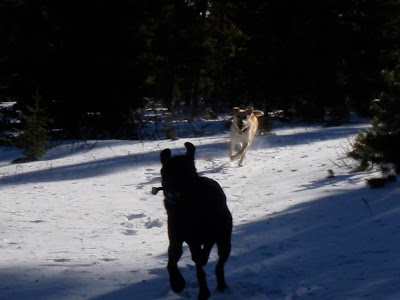 Along the way, R and Pepper played endlessly and mostly looked like great buddies. But, I noticed a few times that their body language escalated in a way that concerned me. Below, they faced each other and snarled directly in each others' faces. Pepper looked very assertive and R looked uncertain, with a lowered head, lowered body, and his body weight shifted backward. 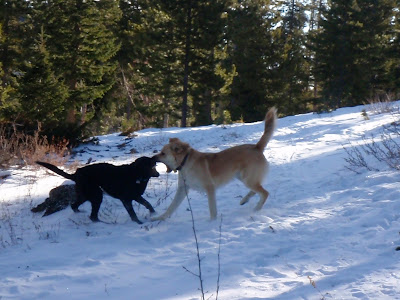 After that snout-to-snout exchange, R turned his back and tucked his butt, seeming scared. 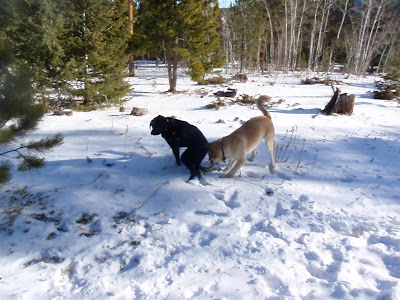 He remained subdued for about 10 seconds. Then, he rapidly turned toward Pepper, taking the offensive, and Pepper rocked his weight onto his back legs. Pepper seemed surprised by R's comeback. 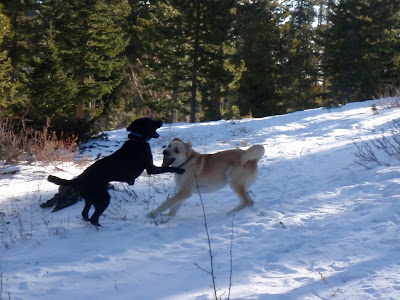 K acted scared by the boys' rowdy behavior and trotted along just behind me, keeping me as her shield. 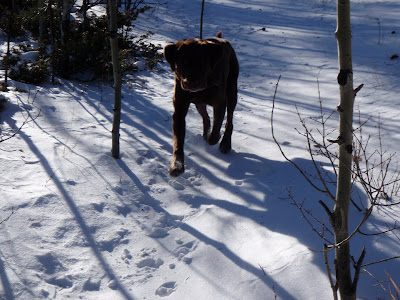 Just before we arrived home, R performed an amazing spin move as he played with Pepper. He started to spin clockwise with all four paws on the ground. 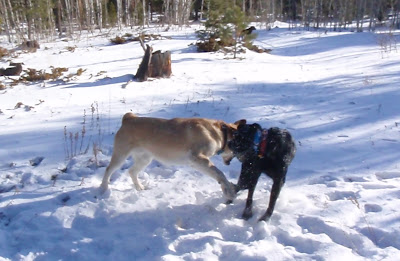 A quarter second later, R was airborne and spinning like a top. 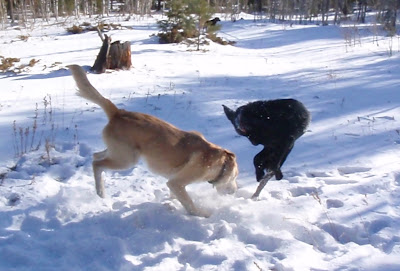 Then, just another quarter second later, R landed on all four paws facing Pepper. What a move! 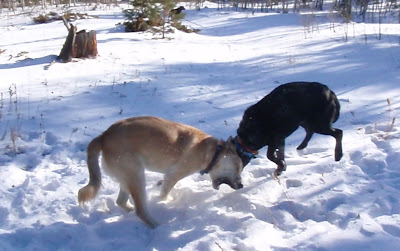 It was a blast watching the boys play and trying to pick out body language signs about their states of mind. Pepper definitely needed to be the boss most of the time but R was prepared to cede the top position as long as Pepper kept playing with him. R seemed very good at calming Pepper when the play started to escalate out of control. When I see social skills like that, I realize that the huge amount of time that we spent socializing him to other dogs when he was a puppy was worthwhile.

After our ski, I headed out onto the dirt roads for a studded-tire mountain bike ride. The continuous spinning of the pedals relaxed my lower back to a greater degree than I've felt in days. Moreover, I could tell that the steroid injection to my neck helped at least a smidgen and perhaps even more. Aside from evaluating how my spine felt, I vowed not to think about my longer term medical plan - and that vow provided a nice break from the haze of confusion that's enveloped me lately. 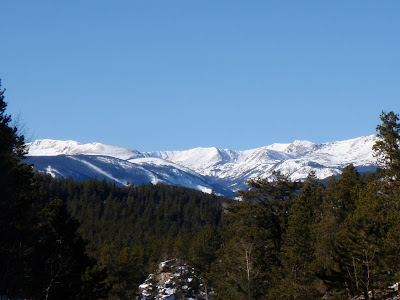 As I gazed at the view in the photo above during my ride, I spotted a coyote in an expansive meadow who was hunting rodents. Sadly, distance and backlighting made photos impossible. He slowly stalked, lifting each paw high and placing it softly on the ground. Then, he stood stock still staring at the ground with his head cocked to the side for more than ten seconds. Finally, he pounced almost vertically, dropping onto his prey. Based on his behavior, I think that he caught breakfast. As he carried his breakfast toward the privacy of the forest edge, a raven started following him, perhaps hoping for leftovers. I wonder what he caught?

Funny, as I stood watching, transfixed by the drama in the meadow, cars zoomed by oblivious to the predatory show underway. Being on a bike makes me notice things that I'd probably zoom past if I were in a car. All the more reason to keep on pedaling!
Posted by KB at 5:48 PM