Dawn ride AND vote for your favorite photo

This morning, I launched myself out the door to ride on the roads early. The eastern sky glowed with the promise of a rising sun.

And, the mountains still looked dusky with sleep as I started rolling down a gulch. 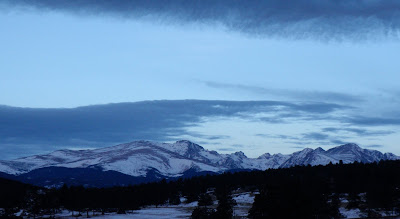 I rolled along next to a creek that was embedded deep in a gully, and I saw a coyote couple traveling next to the gully. I've read that radio-collar tracking studies show that secretive animals like coyotes, bobcats, and mountain lions like to travel along gulches. Choosing the base of a gulch for travel always seemed crazy to me because it would be such hard work. Animals would have to negotiate the tangle of shrubs and small trees that chokes every square inch of the moist ground in the gulch.

Today, watching the coyotes, I realized their strategy. They move purposefully and efficiently along the upper edge of the gulch, where large trees stand and easy paths are obvious. Then, when a threat like a mountain biker appears, the animals disappear down into the gulch, a perfect hideaway. It all makes sense now.

After descending the gulch and then climbing out of it, the sky over the mountains had brightened but clouds blocked direct sun rays. Despite the cloudiness, I still reveled in the morning light. 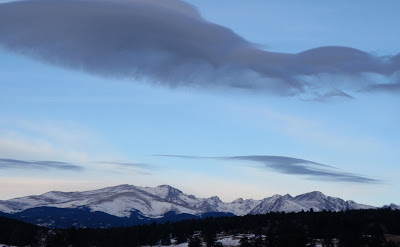 As I rode along, I scanned an imposing jumble of boulders that sits next to the road. A friend told me that she once saw a mountain lion on the back side of this rocky pile so I'm convinced that if I scan it every single time I pass it, I'll get the honor of seeing a lion one day. Today, on the tippy top boulder, I noticed a form jutting upward that usually isn't present. I screeched to a halt. Using my camera zoom, I realized that the animal was a raptor, probably a Red-tailed Hawk. Also, if you click on the photo, notice the brightly colored lichens on the boulder. 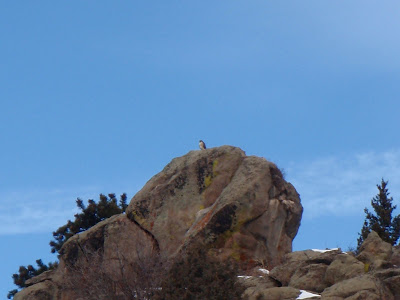 I headed for home to take the pups for a snow bike ride. They're a spoiled duo. They'd already had a dawn run and seemed surprised that I was treating them to more fun!

To my relief as a snow biker, the snow finally has begun to solidify, probably because the temperature soared slightly above freezing yesterday. I could ride the packed snow for extended periods, and the pups seemed pleased that I wasn't such a slow slug!

We climbed straight to a viewpoint to enjoy the mountains. I loved the contrast between the azure sky, the white puffy clouds, and the gray veil arcing over the snowy mountains. 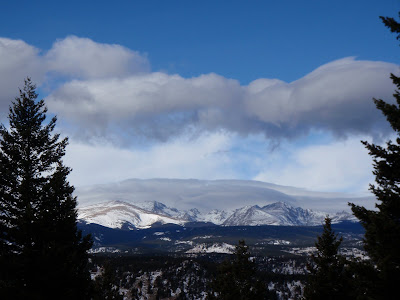 And, of course, I needed to take one photo of my duo before heading home. Something in the forest had them both on high alert. Their heads swiveled in unison from one side to another. Here, they looked down a slope into a boulder-strewn aspen grove. 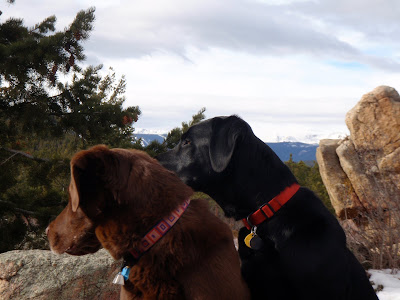 When I arrived home, I worked some more on picking out my favorite 'Mountain Dog' photos to enter a local contest. There are two categories, posed and action photos. I plan to enter both categories but today's vote is for my best two 'posed' photos. Since it's a Mountain Dog photo contest, I think that I need an element of each part of the title - a mountain environment plus a beautiful dog or two.

I've narrowed it to four choices. I'd be grateful if you could pick your #1 and #2 top choices to help me decide which ones to submit. 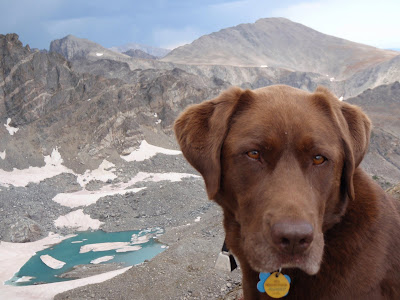 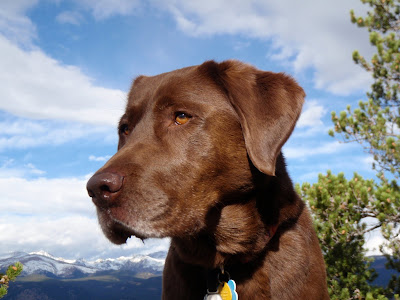 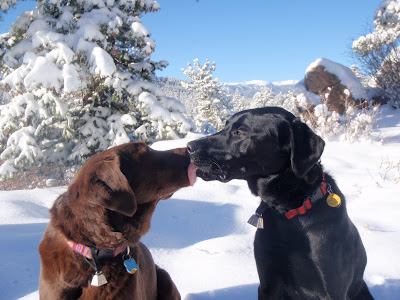 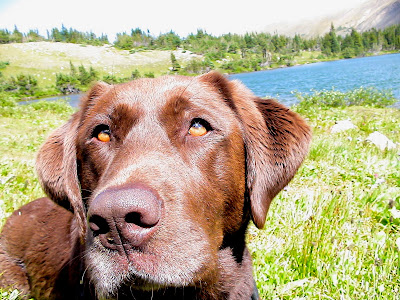 Thanks in advance for your input!
Posted by KB at 3:40 PM