A murky path ahead 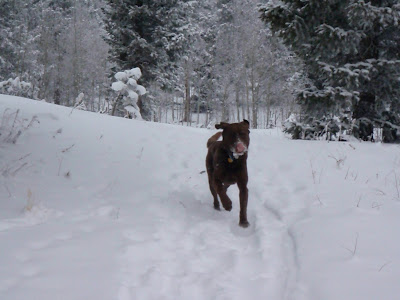 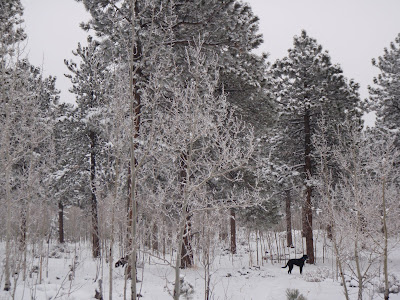 Although the dogs hesitated at the door before joining me for a ride (an unprecedented event), they romped with abandon once they plunged into the deep cold. They rapidly grew icicle beards as their breath froze to their snouts. 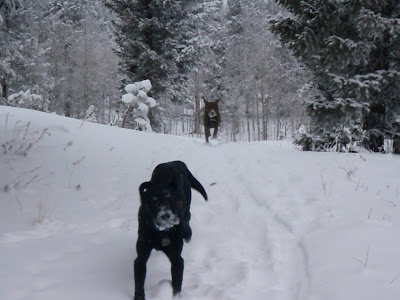 Eventually, K's 'beard' oozed up to her forehead! 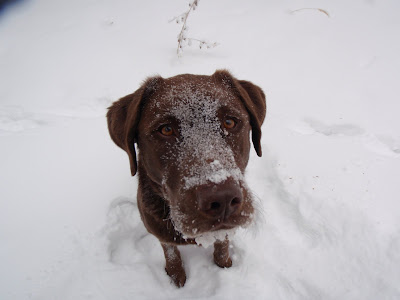 The snow biking conditions were stupendous. After days of riding our trails, my Fatback tires had packed them into dirt-like hardness. I forgot about the cold as I hammered around our trail network. And, in snow biking, there's absolutely no chance that I'll go too fast for the dogs so I can ride at my limit as they lope along easily matching my pace. They can even stop for a wild game of 'stick' and then catch up with little effort.

Alas, my snowbiking escape from reality had to end earlier than usual so that I could drive through the forecasted snow storm to my surgeon. I know him well by now, after he fused my lower back a few years ago. He expressed surprise that I'd been able to stay away from him for so long! Unfortunately, the light-hearted banter ended there.

The big problem is that so many things are simultaneously falling apart in my spine. Undoubtedly, four neck discs must be removed and their joints fused in the foreseeable future. To add insult to injury, one low back disc needs the same treatment, extending my existing fusion one joint further. In a flash of brilliance (ha!), I thought that maybe we could do everything in one surgery. No such luck.

So, the devilish question is where and when to begin? The surgeon candidly said that he looks at MRIs and does spine surgeries full-time yet deciding how to proceed in my case is almost impossible. I'm 'young' in years compared to the degeneration in my spine. If the surgeon is too aggressive about fusing joints now, I'll likely pay a heinous price later in life because the remaining discs will be under intense pressure and will degenerate.

My neck situation is most dire. I could: 1) try to wait a little longer to 'buy some time' for the other discs in my back, 2) have the worst joint fused (its disc has caused me to lose sensation in part of my hand plus lose biceps strength), or 3) have all four joints fused in the near future. At first, I kind of liked choice #2, but the surgeon then said that he'd almost certainly have to fuse the other 3 discs within a year or two after the first fusion. The specter of a series of surgeries truly intimidates me. I felt baffled about the best choice.

Then, after dealing with my neck, we need to deal with the ruptured disc in my lower back. I'm dragging that foot when I walk, not a good sign for the long term, and the pain has grown more insistent almost daily. The surgeon suggested trying some steroid injections around my low back disc to buy us time to treat my neck. At that point in the consultation, I felt like a walking disaster.

To try to help us chart a path, the surgeon finally put his advice into personal terms. He echoed my non-surgeon spine doc almost identically by telling me what he'd do if those MRIs were from his own back or a family member's back. Both docs said that they'd fuse all four neck vertebrae sometime soon and then later extend the fusion in the lower back if they were making the choice for themselves or their family member. But, if I take that course, both docs said that they'd fully expect even more spine surgery later because I'd start wearing out the remaining discs almost immediately.

So, I didn't post anything yesterday because medical issues swirled around my brain, leaving me confused beyond words. I felt deeply dejected about the tough course ahead.

At least my wildlife camera provided some distraction for my muddled brain yesterday evening. During yesterday's sub-zero temperatures, a coyote hung out under our birdfeeders for hours. He must have been desperate for food because I've never known a coyote to be so bold in broad daylight in the past. He looked nervous for almost his whole visit. 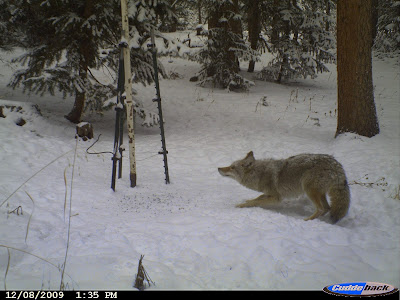 As always happens, no matter how much our personal worlds are rocked, a new day dawned today. It was my only day this week with no doctor appointments. I planned to have a fabulous snow bike ride. I hoped that my decisions would be clearer at the end of the ride than at the start. 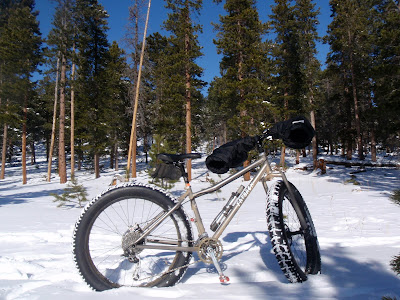 The start was gorgeous with sunlight filtering through a front of clouds sliding toward us from the west. It felt warm at +2°F and only a light wind, despite a forecast that included wind gusts of 60 mph. Although the early morning wind wasn't fierce, it had already filled in my snowbike tracks from yesterday. Below, the glowing chocolate K galloped along one of my snowbike trails. The only sign that it's a trail was a slight depression in the snow and her pawprints. 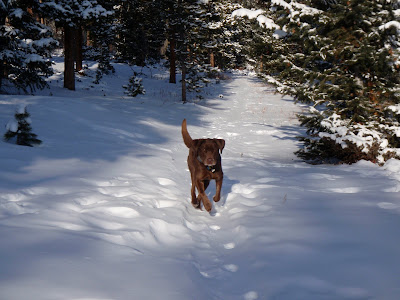 We headed straight for a lookout point, thinking that perhaps the clouds had cleared for the first time in days. Alas, we saw no mountains but the winter scene still resonated with beauty. 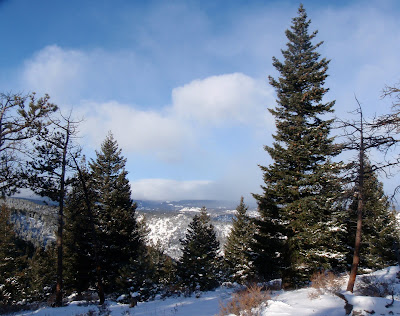 We continued on, across a high open plateau, and the air remained still. 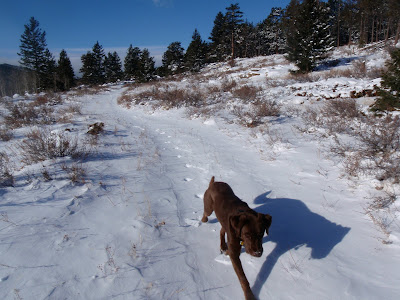 K and I had a relaxed ride, and I made some progress toward repacking the snowbike trails. I dropped her off at home in an eerie bubble of calm air and headed out for more riding.

I pedaled through the forest, past where I'd seen the mountain lion tracks the other day, and emerged on a small dirt road. My plan was an easy spin along the road and then to return home. Alas, my plan was blown to smithereens when the first gust of wind nearly knocked me off my bike. I put down a foot to save myself, and looked toward the hills to see great billows of snow flying to the east. The snow sped toward Kansas, looking like plumes of smoke from a forest fire. My fingers almost froze to the camera as I took this photo. 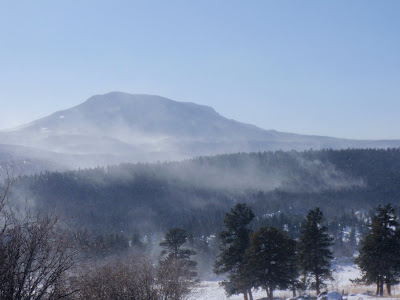 Immediately, I knew that I was in trouble. I could barely stand up or look into the wind- and I was standing in a forested area! Ahead of me, I had huge open meadows to traverse to get home. I put my head down and started pedaling. When the ice pellets bombarded my face, stinging so intensely that tears came to my eyes, I'd stop and turn my back to the wind until the gust passed. 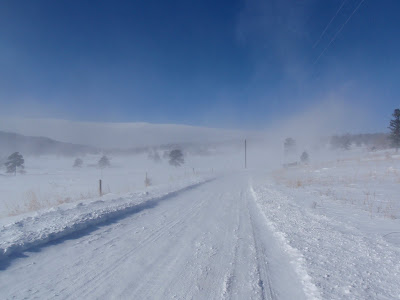 I was fruitlessly trying to ride directly into a wind and ice pellet tunnel, and I decided that I needed to get back in the forest. Even though my house sat less than a half mile away by road, I couldn't fathom riding my bike through the open meadows for that distance. So, I took the longer wooded route home.

The wind had resculpted the forest trails in a few minutes. It erased all evidence that I'd ridden on the trails so recently. I kept trying to get back on my bike to pedal home, but I'd founder in the deep windblown snow, leaving tracks like those of a drunken cyclist. 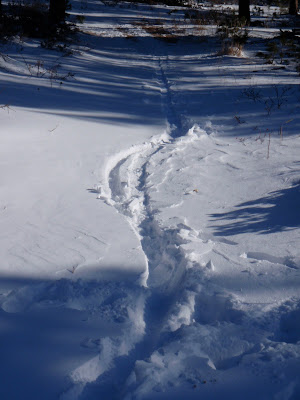 So, I trudged next to bike. When a promising patch of snow appeared, I'd pedal a few yards but soon I'd be back next to bike, pushing. I met a woman on the trail who said that she thought that the end of the world had just arrived. I smiled - she does tend to exaggerate but I'd been having parallel thoughts. I wondered where the animals hid from the wind and how they possibly stayed warm. I honestly cannot imagine how they do it in wind-blown snow.

Finally, within ten minutes of home, I had no choice but to emerge from the scanty protection of the trees for a brief distance. I took a photo, which does no justice to the horizontal stream of ice pellets that flew from right to left ahead of my bike. Then, I put my head down and finished my journey. 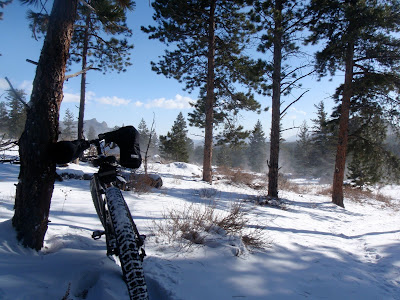 Whew, what a ride. I didn't figure out a single thing about my medical decisions because my focus became surviving the wind and trying to stymie the devious blowing snow that was infiltrating my layers of warm clothing.

Perhaps it was good for me to be so completely distracted by trying to survive. Certainly, I proved that I am foolhardy, ignoring the warnings of the weather forecasters, and riding anyway. That might be lesson from the ride, not to ignore the sage advice of spine experts. If only they would present a obviously optimal plan - I'd follow it. But, sometimes the optimal path toward home is obscured by blowing snow.
Posted by KB at 4:00 PM