A hard bike ride and journey

Reality has engulfed me today. I know from past experience that I'll get through this malaise and find my fighting spirit. Today, unlike most days, throwing my rage into my pedals didn't free me of its grip.

An ironic wrist band found its way into my life this week. I believe that the message was meant to be directed at college students who fight self-esteem battles. When I saw the message, I wondered if I could still love my body. After all, it's turned on me. But, it does still let me ride my bike through nature. 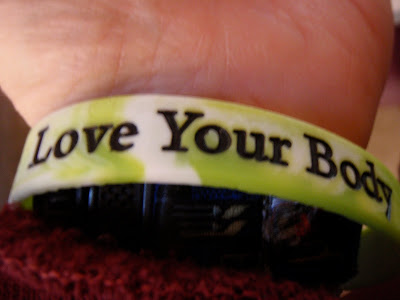 This morning, the pups and I headed out to try to ride on the windpacked trails. I could easily pedal forward in some areas where the wind had stolen all of the snow except the boot-packed crystals on the trail (see below). 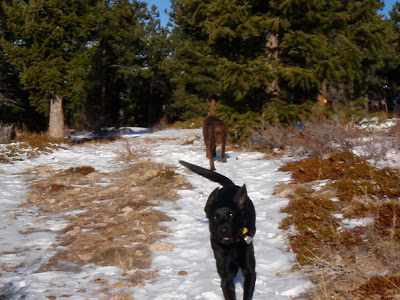 The dogs liked the footing in the scoured areas and commenced a light-hearted game of stick. In contrast to R's demeanor with Pepper yesterday, he seems to know that he needs to tone down his rowdiness to convince K to play. They played tug-of-war over a stick. 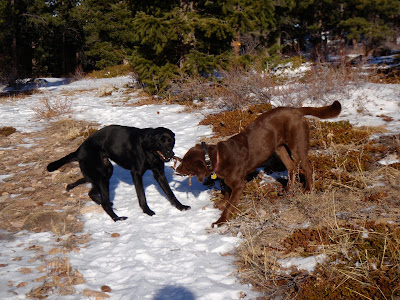 Just 25 yards after this packed and scoured area, my 4" wide snow bike tires foundered from side to side in deep wind-blown powder. Then, another 25 yards later, I very briefly levitated and floated atop the windpacked crust. What a wonderful, albeit brief, instant in time! Kerplunk, I broke through, leaving behind plates of snow crust scattered like glass from a broken mirror.

So, the dogs and I alternately plodded and pedaled, stopping for a few photos. They're a handsome pair, in my unbiased opinion. The ski area is barely visible behind the diffuse clouds in the background. 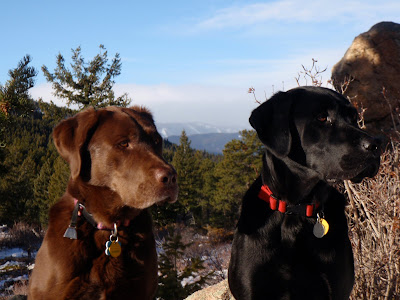 Later, after dropping the duo at home, I headed out our driveway for a road ride. I noticed, yet again, a wildlife corridor that crosses our property. Multiple large animals had waded through the snow, leaving cavernous tracks. However, the wind's force distorted every detail of the tracks overnight so I have no idea whose tracks they are. I might move our wildlife camera here. I'm getting tired of taking approximately 100 photos of coyotes every single night under our birdfeeder. 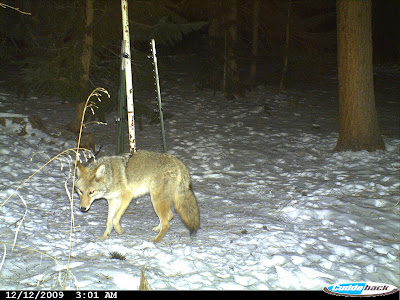 The tracks crossing our land were definitely NOT left by a coyote - so they're fascinating to me! 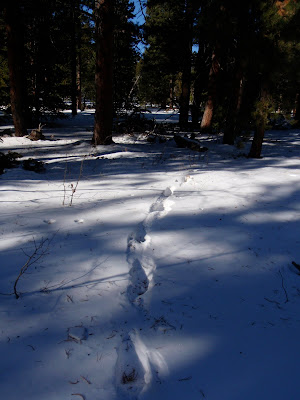 Out on the roads, I pumped my pedals with every ounce of anger in my body. I rarely stopped gasping for breath or feeling like my thighs were on the verge of exhaustion. Alas, the hard ride left me tired but no less unsettled. Usually, a hard ride helps me feel less angst.

Near the end of my ride, I spotted a rocky spire looming against the stormy sky. I started wondering how it formed and how long it has stood in that spot. I once knew a woman who was born in about 1900 in a nearby cabin and lived her whole life here. She told me that she used to ride a horse and carriage to town a few times a year for supplies. I can only truly imagine history in a human's time frame - so my true sense of our local history stops in about 1900. I'm sure that the spire, shown below, stood like a sentinel as that woman rode by on her horse so many years ago. The earth's forces probably formed that spire millions of years ago, and that time frame addles my brain. 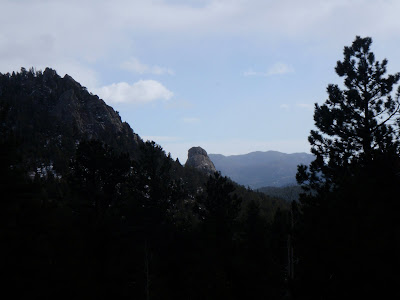 But, like many people, I find the future even harder to fathom than ancient history.
Posted by KB at 3:42 PM