In a sea of rock

Our first morning in Moab dawned clear and chilly. Our thermometer read 18 degrees before the sun hit our campsite. At 8 AM, the rock wall to our west still looked dark and gloomy. The sun's rays hit only the spires atop the cliff because another large rock wall adjacent to our camp blocked them. 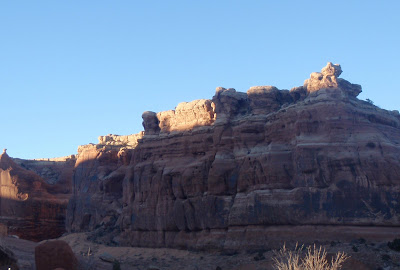 However, within a half hour, the Navajo sandstone glowed in the sunlight. The shadow along the base of the formation shows the shape of the rock cliffs next to our camp. 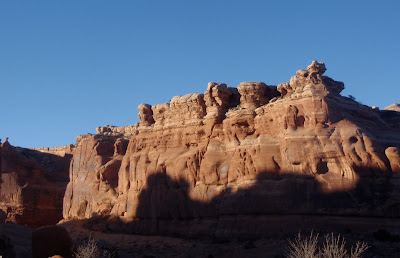 K and I moved slowly, waiting for the sun to warm the world. I have plenty of opportunities to ride my bike in frigid air at home. By waiting an hour, we rode in a comfortable 45 degree world.

As we started our ride, we ran into the boys, finishing their run. R donned a lot of paraphernalia for his run. His boots protected his paw pads from the slick rock, and his electronic collar is our life insurance policy in case he decides to chase a coyote. 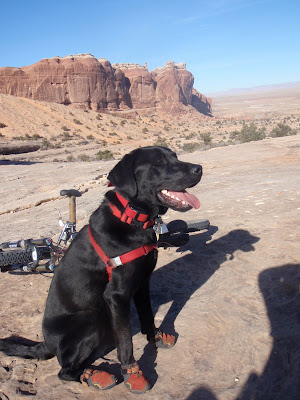 K believes that she is utterly incapable of even walking while wearing boots. She refuses to move and stands stock still while holding one or two paws in the air. I usually can convince her to start to walk and maybe even run. However, she soon halts and refuses to move another inch until I remove the offending boots. 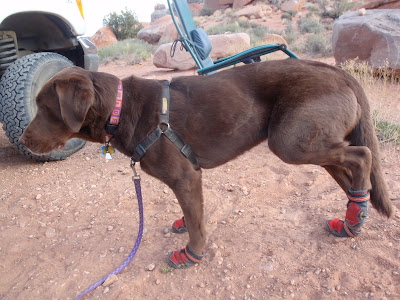 Due to K's boot-phobia, she and I took sandy jeep roads for our short rides together in Moab. Almost immediately after seeing R with his paraphernalia, we saw coyote tracks, making me glad that both dogs wore their 'life insurance' policies. 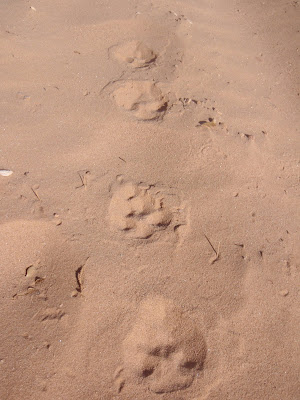 Coyotes are astounding. They can live in the snowy cold environment of the Rocky Mountains but they can also flourish in the desert. Simply amazing.

The coyote tracks tended to purposefully trot along the road, that is, until they crossed the tracks of a kangaroo rat or a rabbit. The coyote would veer off to investigate, hoping a tasty rodent meal awaited him. I saw one set of bobcat tracks which followed exactly that pattern - purposeful walking until he crossed the scent of a rodent or lagomorph. Then, he left the road to investigate.

Kangaroo rats are graceful rodents who hop on two legs like a kangaroo. They're well adapted to deserts. They're active at night to avoid the heat of the day, and they have specialized kidneys that prevent them from excreting much water at all. Most mammals are forced to excrete lots of water to flush toxins and waste products out of the blood. However, with an amazingly simple adaptation to the kidney, kangaroo rats can go long periods without drinking much water. 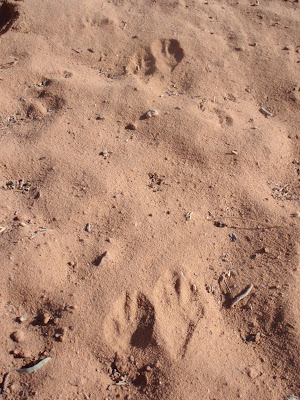 Along the sandy roads, K and I also ran across rabbit and bobcat tracks but no reptilian tracks. I suspect that all the lizards and snakes are hibernating now.

Although we tried to avoid slickrock, it was almost impossible. Here's a view down one of the canyons near our campsite. Sandstone covers the canyon floor until the bottom, where I suspect that millions of flashfloods deposited the pits of sand that take over. 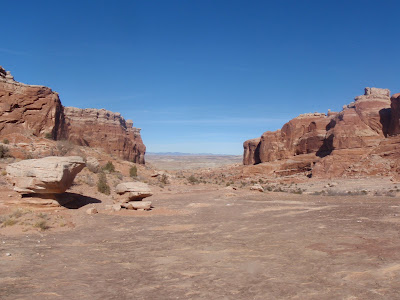 K's chocolate fur was only slightly darker than the Navajo sandstone cliff behind her. Sandstone comes in many colors. The dark red is created by iron oxide embedded in the stone. 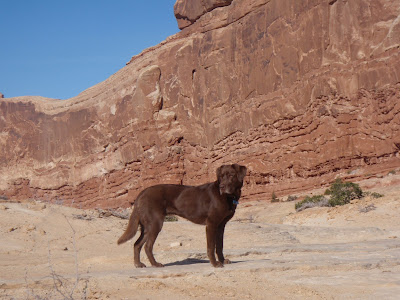 As we navigated a sandy jeep road, it seemed like an island in the midst of rock. Smooth rocky surfaces surrounded us with the snowy La Sal Mountains behind them. This juxtaposition of desert and alpine typifies our area. 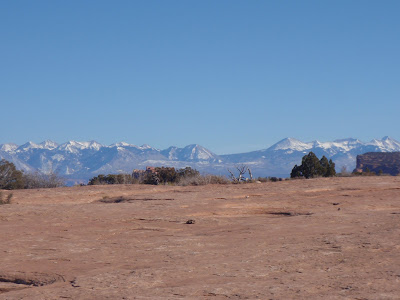 It was a bit frustrating. I chose our route entirely with the goal of minimizing K's running on slickrock but she chose the rock over the sand almost every time. Fortunately, her paw pads held up over the trip. I need to work on the boot issue with her! Does anyone have experience with desensitizing a very sensitive dog to boots?

Below, I asked her to stand-stay for a photo. A cliff too steep for me to peek over it dropped off about 10 yards behind her. She'd been confidently staring over the brink before this photo. My palms get sweaty with nervousness just thinking about it. Perhaps the tongue flick in the photo tells us that the dizzying heights scared her too! 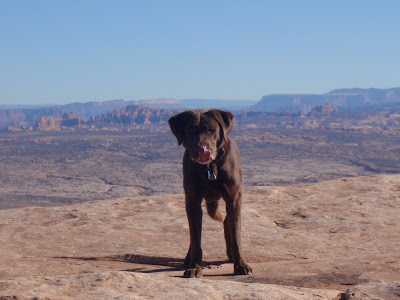 After I left K at camp with the rest of the pack, I went to play on some slickrock. A pair of buttes sat in the distance, with an ocean of slickrock surrounding them. I climbed up to them. 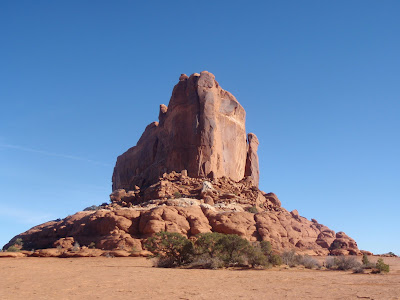 Slickrock lets a bike go anywhere. No trails are needed. I just glided around the buttes, exploring the nooks and crannies and glimpsing far off mountains. 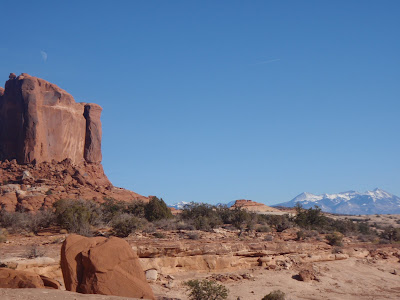 In sandy spots around the buttes, juniper and pinyon pine trees flourished. Those fertile patches are so rare and fragile that I never go too close to them. 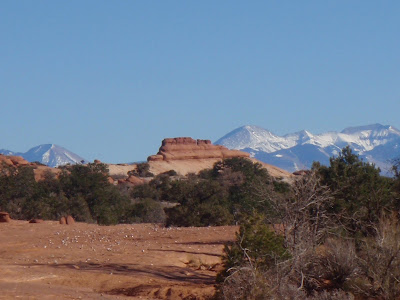 The buttes sat on a high plateau so I could see dramatic features of the canyon. These towers loomed at the opening to an adjacent canyon. 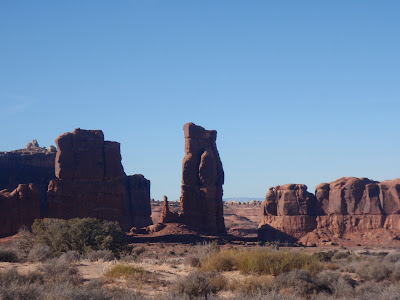 After playing for a while, I descended toward camp, marveling at the water accumulated in a series of bowls that stepped downward through the canyon. 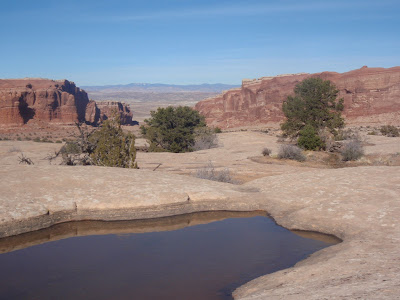 I followed next to the bowls and saw that they eventually coalesced into a continuous gully that undoubtedly carries rushing water after an intense thunderstorm. At the bottom of the gully, the water has deposited tons of sand, likely eroded from the rock during the storm water's rush downhill.

I arrived back in camp tired and happy, ready to relax with the pack. We watched the sun set and the moon rise simultaneously above the honey colored cliffs. Spectacular. 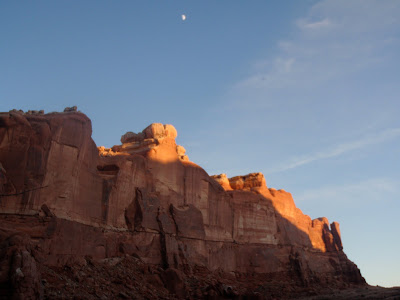 The very same moon rose last evening during our end of the day hike but over strikingly different terrain. 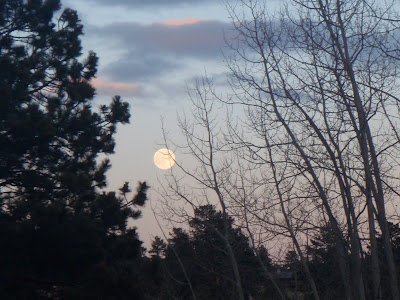