A girls-only ride plus exploring a ridge 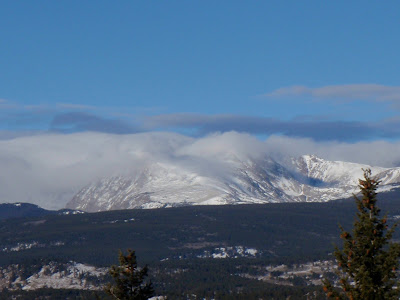 K and I had a 'girls only' ride this morning, mellowly pedaling on snowy trails. One aspect of the low sun in the winter is the soft sunlight that makes K's fur glow. 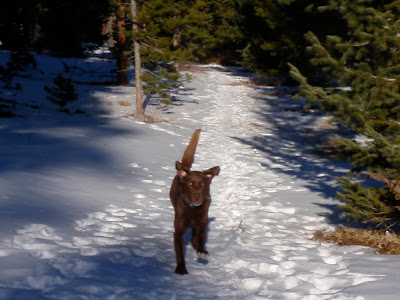 Early in the ride, K clambered on a boulder pile, staring toward the mountains and sniffing the stiff breeze out of the west. 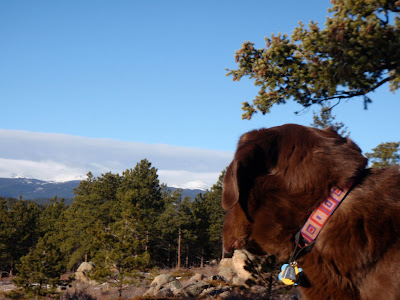 One of the boulders blazed with rust and yellow lichen. While I easily overlook lichen in the summer when a riot of wildflowers captures my attention, their color seems blazingly bright in snowy winter world. 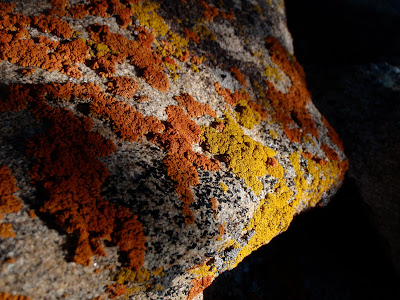 While I examined the lichens, K sat as my hind-guard, scanning our world. This photo showed me how well K has recovered from her very serious bout of pancreatitis in September when she lost close to 10 lbs, including muscle. Her shoulders look muscle-bound in this photo. 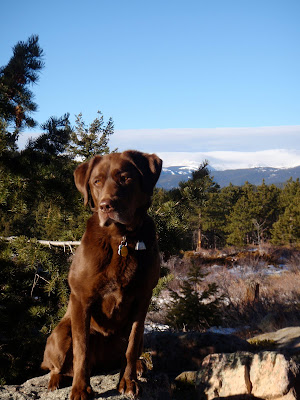 It is surprising, every time, how mellow a ride with K alone feels after having R join us every day for almost a week. I love having R with us but he certainly infuses our bike ride with high voltage energy! By contrast, K loves running easily along side my bike when she's my only partner, rarely running wildly through the forest like she does when R exerts his influence.

After I dropped K at home, I headed for a ridge that I haven't visited in a couple of weeks due to snow and drifting. Alas, it wasn't quite ready for the snowbike, with some deep drifts and soft snow. But, despite suboptimal riding conditions, I enjoyed the views! 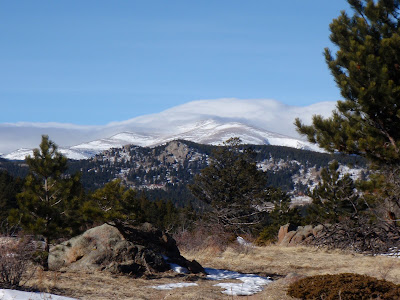 I also followed some tracks that seemed promising as mountain lion tracks, based on their size, pattern, and the crazy route over and among boulders that they followed. However, I never found a single track where I could discern the paw shape with sufficient clarity to be sure. I propped my bike in the snow and followed the tracks into the forest. The tracks crossed the trail next to my bike. 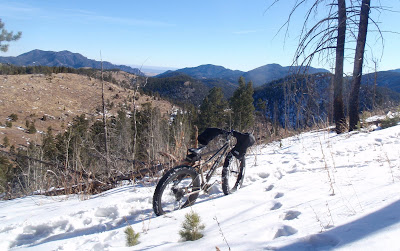 I was on high alert for lion tracks because the elk herd had traipsed across the ridge overnight, and I seem to find lion tracks close to the herd more often than anyplace else. Moreover, I found the dual tracks of a mother and kitten cougar very nearby on two occasions in November.

I enjoyed my sojourn in nature but I felt detached and emotionally muted today - lacking my usual verve but still in a happy mood. I must be tired from all the ruminating and decision-making. Thanks to all of you for your words of support. They make a big difference! 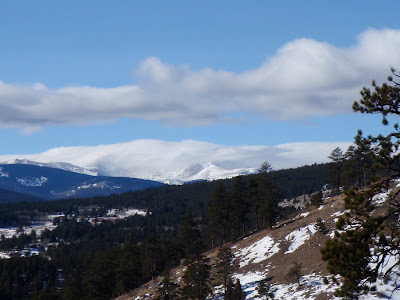