At dawn, I launched myself out the door on my bike, with a headlamp leading the way. The sun still hovered below the eastern horizon. 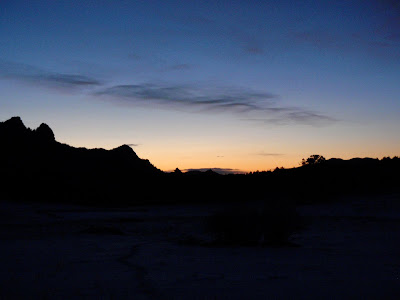 Gradually, the sky turned pink, reflecting off the snow. For a brief instant, every tree, boulder, snowflake, and hill turned pink. 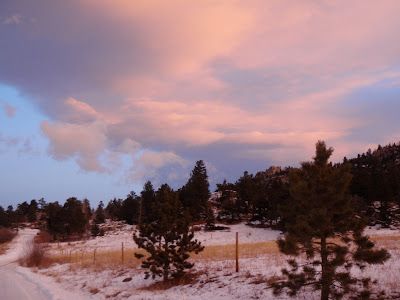 Clouds floated above and among the high mountains to the west, embued with a golden hue from the rising sun. 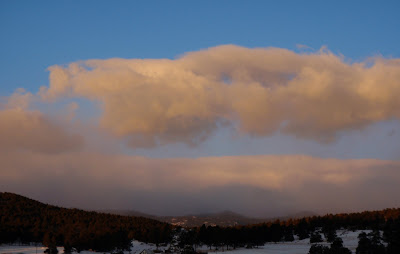 After the sky grew bright blue, I climbed up a packed trail. To my surprise, I found a spine lying on the snow. It was fairly fresh, with nerve fibers still coursing through its canal and out the holes in the sides of the vertebrae. Finding a backbone felt ironic given my rapidly approaching spine surgery. 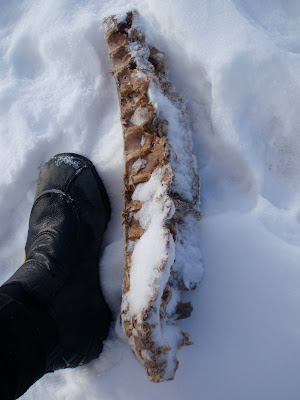 A large quadruped had carried the backbone to the trail but wind had obscured the details of the tracks so I couldn't figure out whether it was a dog or a wild animal. The tracks leading to the spine marched purposefully across the windpacked snow. 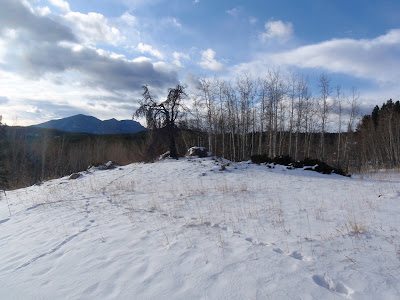 As I arrived home at the end of the ride, I noticed that a bobcat had strutted across our land. 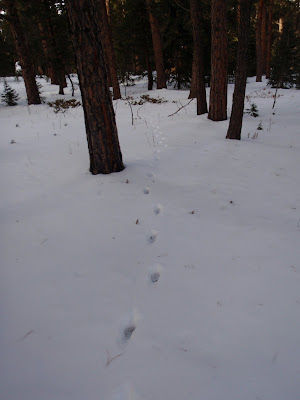 The bobcat stayed on the fringes, away from our wildlife camera. Near the corner of our property, he carefully constructed a small pile of snow. I could visualize his motions, walking in circles and kicking the snow, based on the tracks surround the pile. In the middle of the snowy hillock, he left his scent marking, a 3" long scat. 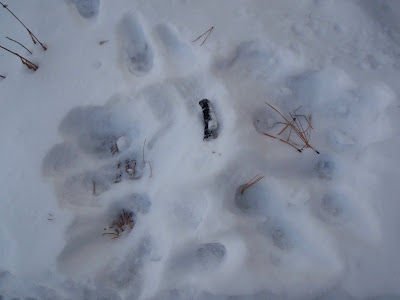 I wish he'd posed for our wildlife camera like he did previously. I'll watch to see if he uses this route regularly and perhaps put a camera next to the scent post.

After my ride, the whole pack went to dog training school. Usually, I work with K but, today, I worked with R for most of the class. It felt odd because I've had K as my dance partner in class for 6 years. I even called R by K's name repeatedly.

R is such a sweet soul. He desperately wants to make us humans happy but can barely control his exuberance for life. Even an errant feather fluttering past us prompted a leap. But, then he remembered that he was supposed to be heeling, and did a beautiful job of refocusing his attention. What a sweetheart. 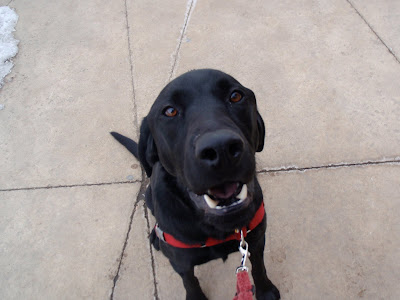 I worked with R partly to prepare for the post-surgery time when I might need R to heel nicely on a leash for me. I think that he's ready for that job!

Below, R approached the other dog in class very diplomatically, turning his lowered head and making his body into a "C" pointed away from the white fluffy dog. 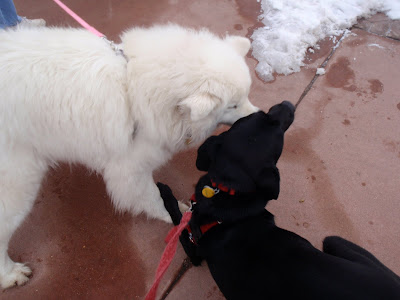 The young fluffy dog jumped all over K after a brief play session. K doesn't look too happy, does she? 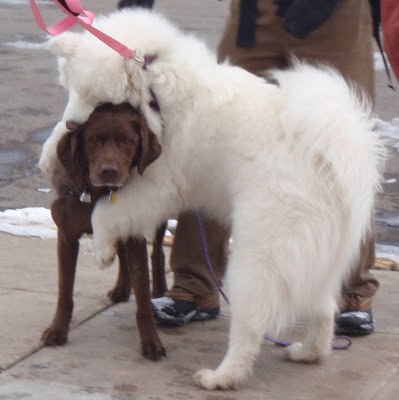 Despite her look of stoic forbearance, K bounced back rapidly, looking relaxed again in the blink of an eye. That's a great sign that she not in a very fearful period.

Finally, after a long day in the city, I drove up the mountain to my peaceful home. What a wonderful feeling to have the forest surrounding me rather than concrete. I wouldn't have it any other way!
Posted by KB at 5:20 PM