Tracking a lion and my steroid injection

We visited our friends last night, including JB, K's handsome chocolate lab boyfriend. JB and R have become fabulous play partners. In fact, they played so intensely that they fell asleep together later in the evening. What a fun time for all of us! 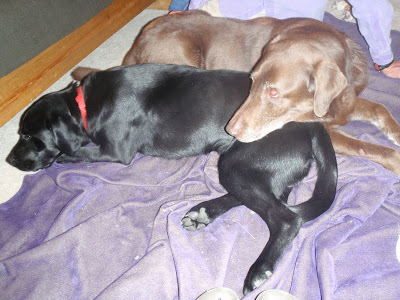 This morning dawned gray and -7°F, with mist floating among the eastern hills. Despite the cold, whose sneaky fingers found every crevice in my armour, the day was beautiful. 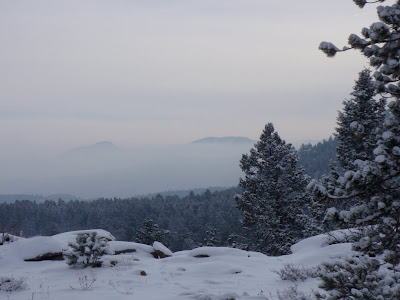 R wanted to play from the outset of our snow bike ride. Here, he eyed K who is just behind a rock, trying to engage her in a game of chase. 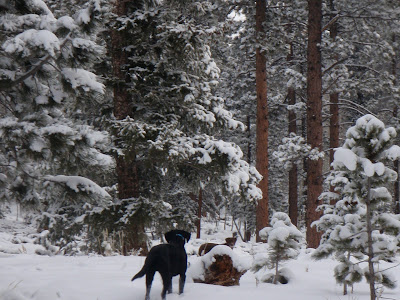 He didn't succeed until he dug an irresistible stick out of the snow. Then, they frolicked like puppies, play fighting for the stick while kicking plumes of fresh powder into the air. 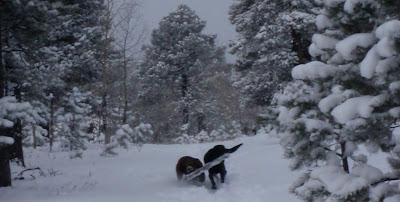 It's amazing how much dog play can resemble the scripted professional wrestling that's on TV. If one dog wrestles the stick into his or her sole possession, the winner then makes the stick easily accessible for the other dog to steal. By play-acting like this, the duo keeps the game going by preventing either dog from becoming frustrated.
On my solo ride with the pups safely at home, I pedaled through our daily allotment of fresh snow on my Fatback, and I spotted humongous feline pawprints traipsing across the trail less than a half mile from my house. Not only were the tracks the right size and shape for a mountain lion but they also showed a distinctive tail drag. As a lion walks, its long and lithe black-tipped tail swings from side to side with each stride, leaving drag marks in its path. 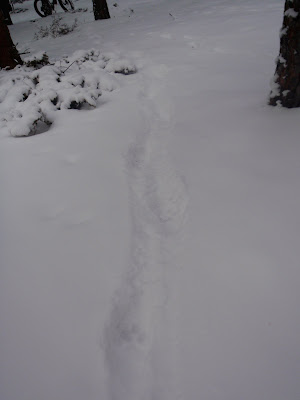 Compared to the recent tracks (here and here) that I spotted of a mother lion and an almost-adult kitten, these tracks looked giant. The measured at least 4" in both dimensions. My chemical handwarmer is 3.5" long and is in the photo for scale. 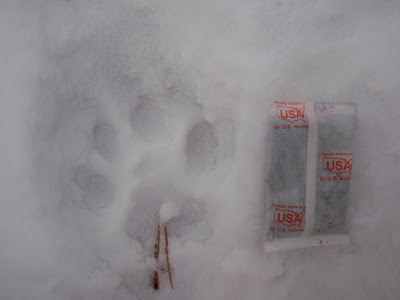 In the fairly clear track below, notice the four toes pointing toward the top of the photo. Then, there's the large paw pad behind them. I had the good fortune of finding a track so clear that the two cusps on the front of that paw pad were obvious. If you look at your dog's rear paw pad, it's shaped like a triangle, with a single cusp pointing forward. The 'double cusp' is unique to felines, making me completely certain that this is a mountain lion track. 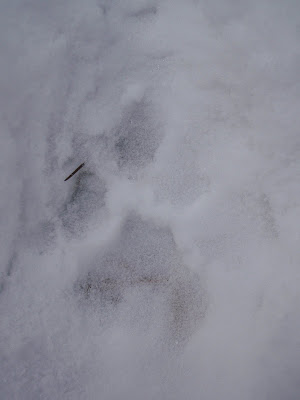 For some inexplicable reason, my photos are now refusing to enlarge if a viewer clicks on them. However, you can either save them as a jpg or copy them to a photo program. Then, your program should let you zoom in on them.
Based on the gigantic paw size, I'm guessing that these tracks were made by a large male lion. I'm told by a mountain lion expert that our county, which measures about 740 square miles, only harbors a few dominant male lions. These cats are the kings of the forest who control which mountain lions can reside in their territories. I can't be certain that this lion has risen to the level of a dominant tom cat but his paw size certainly makes him eligible to join that exclusive class.
Interestingly, these tracks followed almost exactly the same path as the mountain lion tracks that I saw last winter, suggesting that they were left by the same cat. That piece of evidence supports my notion that a dominant male cat left these tracks. Younger cats don't have established territories and would not patrol a repeatable route. Moreover, female cats would have smaller paws and kittens with them. So, by exclusion, I'm leaning even more strongly toward this route being part of a dominant male cat's territory.
I backtracked him through a boulder strewn ponderosa pine forest. In the photo below, he gracefully walked between the tree trunk and the pile of boulders. I hoped to find some fur scraped onto the pine bark (if he'd brushed the tree while walking past it) but I didn't. 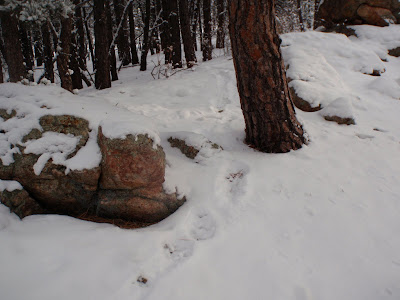 Most of the time, he walked slowly and deliberately, carefully placing his rear paw exactly into the track left by the front paw. However, at one point, he descended a small hill and moved faster. On the steepest part, his paws slid downhill in the snow with each step. When he stopped sliding, I could see that his rear paw landed ahead of his front paw's track. This pattern is typical of a lion's fast walk. 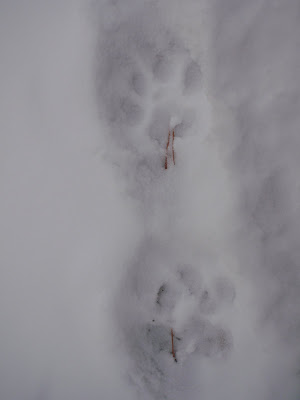 While following his track, I found a spot where he had laid down for a while. The snow had melted under him as he hunkered down behind a pine tree. Amazingly, this spot was within 5' of where I recently found an 'animal bed'. Based on today's observations, I bet that it was a lion's hiding place.
No doubt, today's tracks were left in the wee hours of this morning after the snow had let up so this lion probably wasn't sleeping. Radio collar studies show that, while hunting at night, lions will hide, lying still, in deer territory for an hour or more, patiently waiting to ambush hoofed prey. In the photo below, the lion walked close to the tree trunk in the right of the photo, and then laid down in the brownish spot where the snow had melted down to pine needles and cones from his body heat. 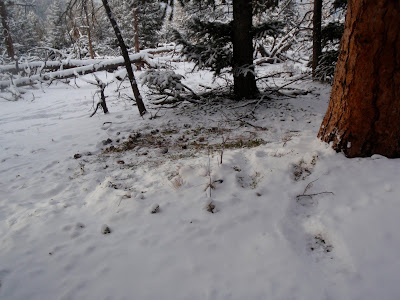 Then, after watching and waiting, the lion continued in the same direction as he'd been traveling when he laid down. His tracks indicate that he walked slowly and carefully as he departed from his hideaway. I wonder if he was stalking a deer at that point or if he'd given up. In the photo below, his bed is in the lower right and his tracks leave along the middle to upper left of the photo. 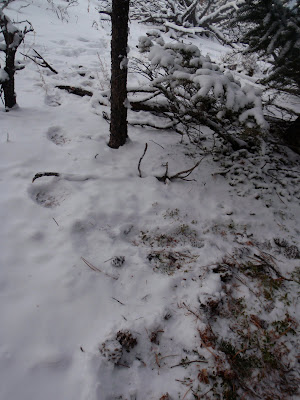 As I looked at his departing tracks, my heart leaped out of my chest as a brownish-tan large animal moved about 20 yards ahead of me. After my initial fear, I realized that it was a deer. 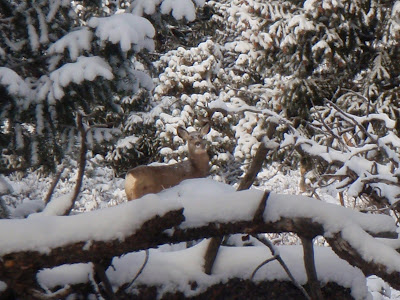 Then, another animal stirred, moving toward the deer. My heart accelerated again out of fear that the lion lurked nearby but then I realized that it was another deer. The second deer is barely visible to the right of the obvious one. 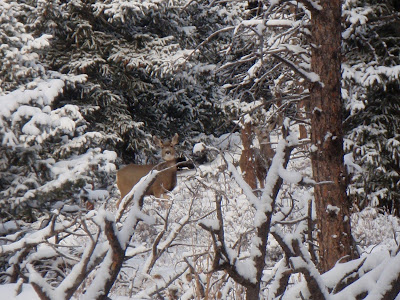 I know from my daily jaunts that a small herd of deer browses in this area almost daily. That's why the lion hunted here. The presence of the deer made me feel more confident that the lion had departed (based on the shaky logic that they wouldn't hang out near a lion). However, I decided that it was time for me to depart as well. The cover was thick, with lots of downed trees and boulders that could serve as excellent hiding places for predators, so I didn't want to wade into a bad situation.
Finding evidence of our fiercest predator so close to home completely distracted me from worrying about my epidural steroid injection. A good thing - because these injections scare me. Just having a needle so close to my spinal cord gives me the shakes.
I wrote most of this before the injection late this afternoon. It went fine, although I'm having my usual immediate reaction of increased pain, including intensely aching legs. The next few days will tell whether the injection helped or not.
The most surprising thing was that my doctor called my awesome spine surgeon, and I now have an appointment for tomorrow. My doctor must have made some compelling arguments because that's a full 5 weeks sooner than the surgeon's receptionist told me the 'first available appointment' was. Now, I just hope that the predicted snow storm isn't too big for me to drive 1.5 hours to the surgeon's office tomorrow.
Posted by KB at 6:39 PM