For those of us in the Northern Hemisphere, we made it! We've reached the nadir of daylight and now our hours of light will start growing, imperceptibly at first but then accelerating as springtime dawns. Sunset last night seemed unbelievably early, like it has for weeks now. 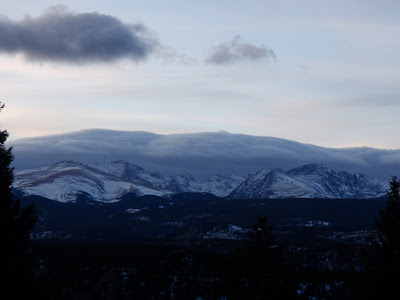 It was a "Three-dog-hike" as our best furry friend, JB, joined us. JB romped with our dogs with puppylike rowdiness. I managed to get the trio to sit still for one instant for a photo. 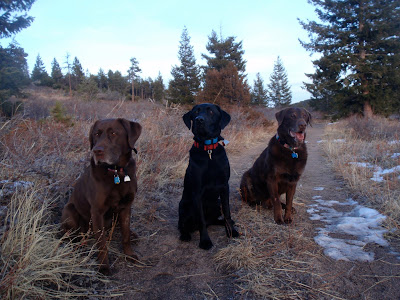 This morning, just K and I snow biked together. The mountains sparkled, with a halo of clouds suspended above them. The idyllic scene gave no hint of the turbulent winds blasting off the mountains. 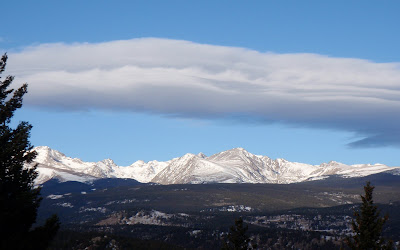 The Continental Divide shot a rocket of wind at us so strong that I could barely stand without swaying or hear anything but the howl of the wind. The short video below gives a hint as to the ferocity of our winds. I was honestly trying to hold the camera still. Be sure to listen to the soundtrack to hear how the wind drowned out everything else.

K clambered on some boulders despite the wind. She seemed unperturbed by the blasts of air until I asked her to 'stay' where she was for a photo. Then, her ears flopped and fluttered with each gust, and K began to look afraid. Don't worry, I released her right away. I hate seeing that scared look on her face. 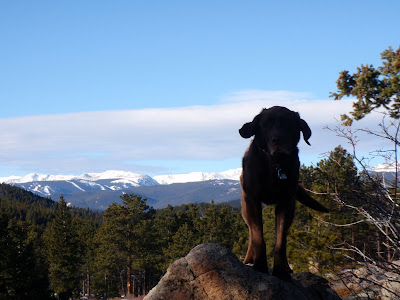 As soon as we made it to a protected oasis, K dove into the snow and wriggled happily, scratching her back in the crusty snow. I finally captured a photo of it! 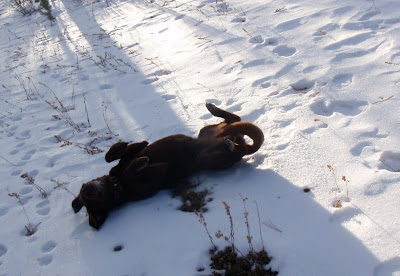 After I dropped K off at home to contentedly work on a frozen kong, I headed toward more snowbound trails. I can't remember how I managed previous winters without my Fatback snowbike. This bike has superpowers that negotiates trails that I wouldn't even consider trying to ride on a normal mountain bike. I rolled down a snowy trail to check out a local reservoir. The deep blue water made the sky seem like a faded blue tee shirt. 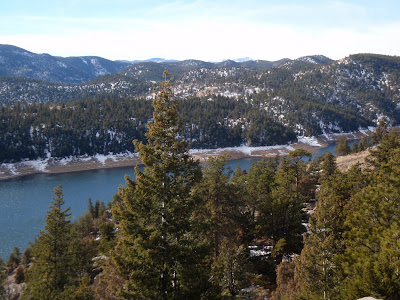 I gazed at a gorgeous mountain view as I bounced down a boot-pocked snowy trail toward home. 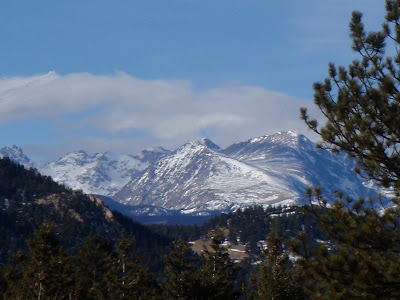 During my ride, I'd picked up the memory card from the infrared wildlife camera set up on a rocky slope above a meadow, next to a rabbit den. This spot has bustled with activity with in recent weeks as well as this week. One early morning, a bobcat arrived. He or she carefully sniffed the bobcat scat left by the rabbit den door. 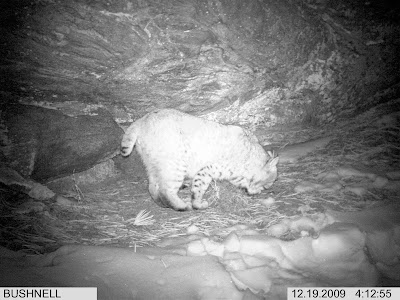 Then, he or she departed without leaving any 'messages'. 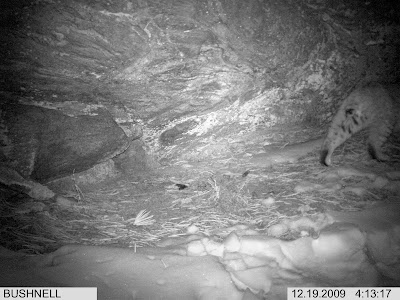 I've been reading about bobcats, and I've learned that one male will share his territory with several females. Moreover, transient bobcats who haven't yet found an empty territory to claim as their own travel through established territories. Each cat makes his or her presence known by leaving scent markers, like this obvious scent post that I've been monitoring with my camera.

In the spot where my camera is set up, the cats have left quite a collection of ground scratchings, pine needle piles, and scat. I now have at least two sets of photos (here and here) of bobcats visiting and sniffing the scat carefully. As I mull it over, it doesn't make sense for a bobcat to carefully sniff his or her own scat - so I'm guessing that multiple individuals have visited this spot. In the photo below, the door to the rabbit den is in the upper right corner and multiple bobcat scats and scratchings litter the area in front of it. 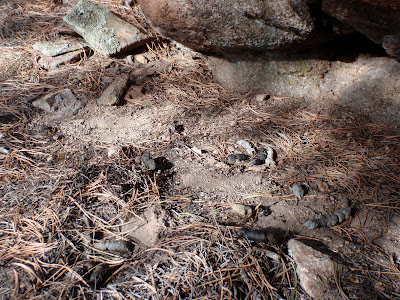 Apparently, the dominant male bobcat will mate with multiple females whose territories overlap his. He doesn't participate in raising the young but, unlike male mountain lions who kill lion kittens in their territories, he doesn't kill bobcat kittens. Based on the time of year, I wonder if the mating process is just starting, with the male and females whose home ranges overlap all identifying themselves by visiting the same scent posts. A bobcat's gestation is about 9 weeks and most bobcat kittens are born in April through June.

Within 45 minutes of the bobcat departing, a coyote pair arrived. 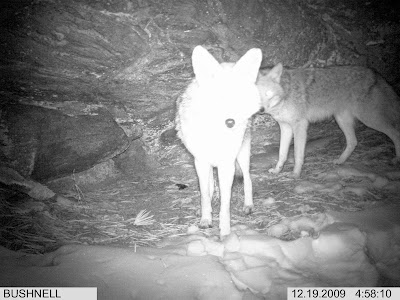 After one coyote left, a second lingered. His image gives a good comparison of a coyote's size compared to a bobcat's stature. Coyotes apparently prey on bobcats so the bobcat was lucky to be gone. However, I can't imagine that a bobcat is an easy meal for a coyote. 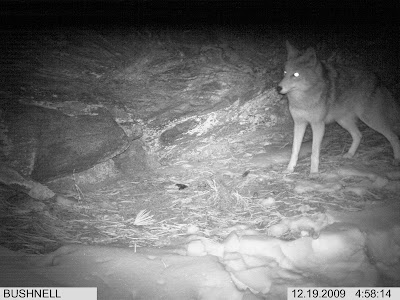 The rabbit appeared a few times in front of the camera but looked very nervous. I don't blame him - a lot of dangers lurked near this spot. The photos from my IR camera have shown me that, even in a hidden spot that sits close to a hiking trail, a complex social structure of predators and prey flourishes. I'm truly enjoying having my 'window' into their life.
Posted by KB at 5:48 PM