Dogs, hawks, coyotes, and my spine 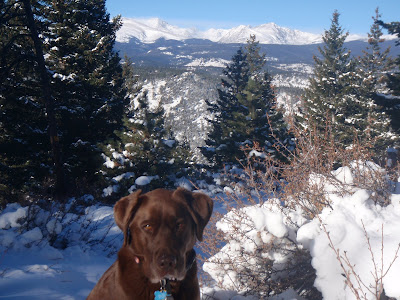 Yesterday, I had packed my favorite snow bike trails to perfection. I could hammer along the hard snow, riding almost like I do on dirt. Then, the wind swept in from the west, hurling the fine dry powder into the air. For some reason, powder tends to settle in the trail depressions. Then, the top layer becomes an almost impenetrable layer of windpacked crust. As I tried to ride the same trails that were so perfect yesterday, the snow crust shattered into pieces, like a glass breaking, leaving behind scattered jigsaw puzzle pieces. After shattering the crust, I foundered in the fine powder below it. It was tough riding to say the least. 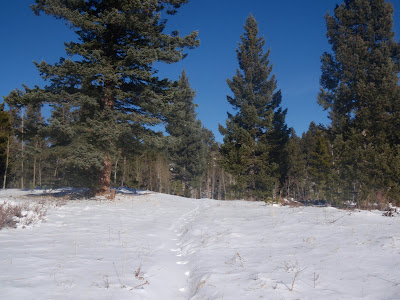 K didn't mind in the least. She zipped around like a wild animal, left ear wildly flying into the air. 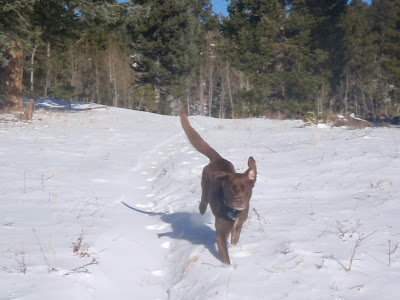 We stopped and enjoyed the crystal clear view of the Divide. The cloudless blue sky felt endless. If I gaze at it for long enough, I feel like the world is limitless. 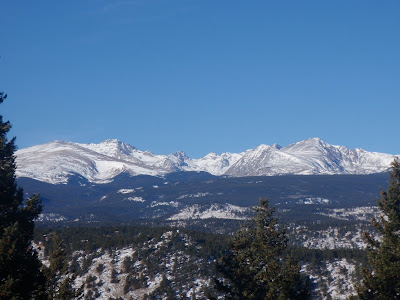 After K and I slipped and slid around our trail network, I dropped her off at home and switched bikes to my winter bike with studded tires so that I could ride on our dirt roads. Sometimes, riding becomes like meditation for me. Today, I found myself mind completely absorbed in pedaling and breathing - with no other thoughts - for miles. It was a wonderful escape.

Then, nature caught my attention. A hawk soared low over my head and alighted on atop a pine tree. At first, he turned his back and ignored me. Notice the fiery red tail hiding under the black tips of his folded wings. The light streaks higher on his wings provided another clue. 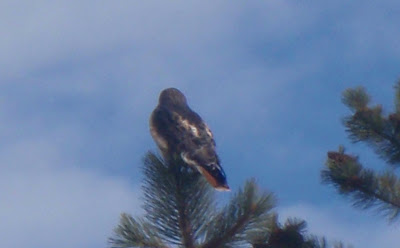 Then, he warily watched me but let me take more photos. His chest feathers were a streaked light color. 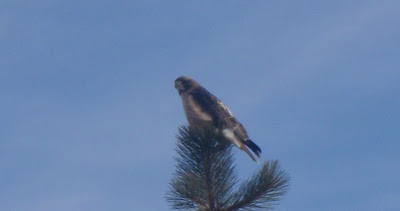 His face was dark and his beak tips hooked downward. 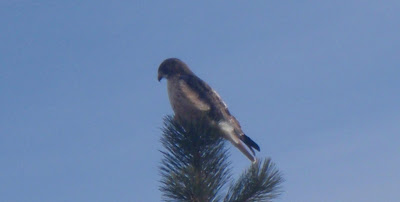 All of these features told me that he was a Red-Tailed Hawk. I'd never seen one perched so close. He was perched over a small meadow, likely watching for rodents or small birds to snag for breakfast.
A little later in my ride, I passed a frozen lake that almost melds with the snowy meadow in mid-winter. I spotted three coyotes crossing the lake. A friend recently saw a trio of coyotes frolicking like puppies on a frozen lake. Today's coyotes didn't play. My presence seemed to alarm them. It's funny that animals seem more afraid of a person on foot or on a bike than in a vehicle. 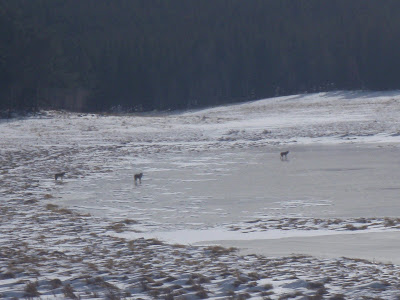 Interestingly, we had a trio of coyotes visit the area under our birdfeeder last night. The lake was about 6 miles from here so I doubt that both trios were the same coyotes. 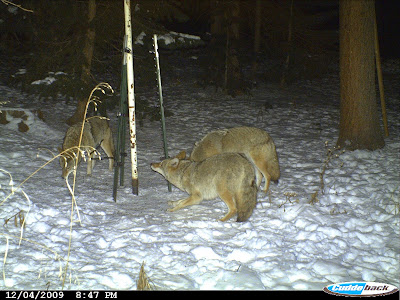 Later in the same evening, a buck visited. Over the 7 months with our wildlife camera outside the house, this was only the second deer visitor. 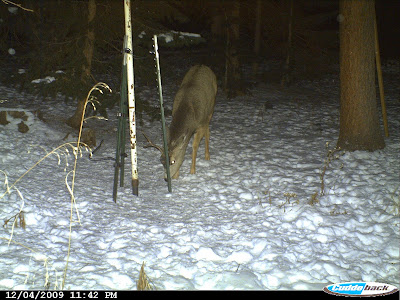 More storms will hit in the coming days with temperatures plummeting below zero. Over the course of my ride, thin clouds formed over the Divide, portending the coming storms. 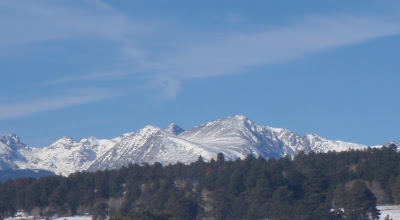 The upcoming week holds some scary steps for me. To make a very long story short, I have 5 very bad discs in my neck, some of which are deforming my spinal cord as it travels towards my trunk and legs. They also are pinching the spinal nerves that go to my arms. I also have a huge disc herniation in my lower back. Surprise, surprise, it's the disc directly above the fused part of my lower back. It's a classic long term complication of spinal fusion. For now, the docs suggest that I 'try to ignore the lower back disc herniation' because the neck situation is much more dire. Thus, on Monday, I'm having an epidural steroid injection around the spinal cord in the worst section of my neck. The hope is that it will reduce my symptoms - at least until I've made a decision about whether to get my neck fused. I also have an appointment with an awesome surgeon but not until the new year, unless I can pull some strings.

I'm curious if anyone has experience with having neck fusion at 4 or 5 levels (i.e., 4 or 5 discs removed and replaced with bone). Do you know anyone with such a massive fusion? If you do, I'd love to hear about how well they've been able to function with so little neck mobility.

After looking at my MRIs, the doc asked me "how do you do it?". I had to ask him to clarify because I had no idea what he was asking. He explained that he wanted to know how someone functions with the level of pain that I must experience on a daily basis. He knows that I don't take many drugs for it. I explained about daily exercise and meditation being my holistic methods to cope with pain. He asked lots of questions - saying that he hoped to pass along advice to other patients. I felt vindicated. I always wonder if I overdramatize the pain in my mind. I guess not.
Posted by KB at 4:10 PM