I tried, without a lot of success, to ride my Fatback snow bike on our trails today. That windstorm that resculpted our world last week did something to the snow properties, making the snow an impediment to almost any form of movement. That is, except for cross-country skiing, which sends jolts of pain radiating down my leg. So, I tried to ride my bike.

R came back to check on why I was going so slowly! 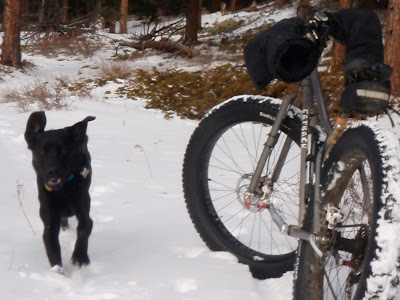 The pups and I took our time, stopping for crazy frolicking. The duo was moving in lockstep in the photo below. 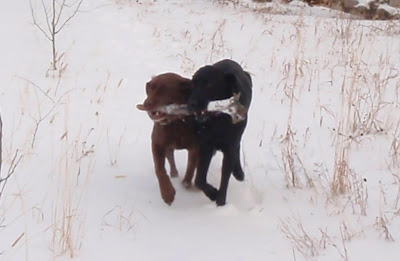 K clambered on a boulder, a favorite 'look-at-me' trick! 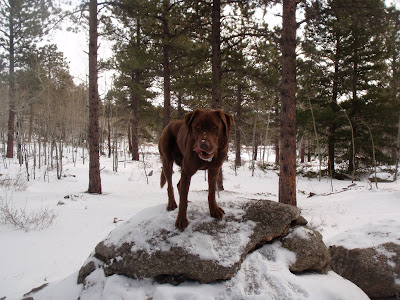 Even though the snowbiking was marginal, at best, I loved my time with our dogs. They infuse my world with a lightness of spirit in a way that no one else can.

After slipping and sliding around our trail network, I headed out for a slippery road ride, enjoying the dramatic cloud-enshrouded views of the rocky hills to our east. 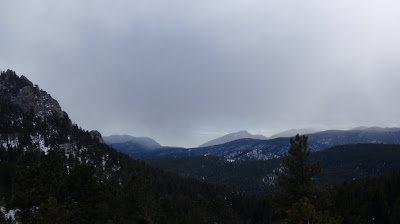 Along the quiet side roads, I saw lots of animal tracks. The elk herd had crossed the road, from one forested hillside to another. I suspect that they're hiding in the protected areas away from our daily winds. I hadn't seen any signs of them in a week so I was happy to see evidence of their passage.

On more than one quiet road, coyote groups had trotted along the the road last night. I bet that the windpacked snow encrusting the forest floor is not easy for the wild animals to travel through. So, they wait until most humans have abandoned the roads after dark, and then use the roads for energy-efficient travel.

At one spot, I saw coyote tracks, overlaid with bobcat tracks. Below, my 3.5" long handwarmer lies next to a bobcat track. Notice the two cusps at the front of the largest paw pad. I never saw that delicate feature until this winter, and now I've seen it three times! 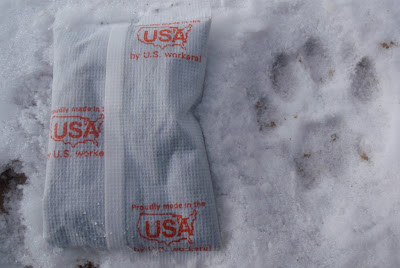 Below, the juxtaposition of the coyote track (top track, oblong with claw marks) with the bobcat tracks (lower right) caught my eye. I don't know who came through first. The bobcat tracks crossed the road, squirmed under a wood fence past an abandoned house, and headed down to a dark and snowy gulch. The coyote tracks stayed on the road for another quarter mile. 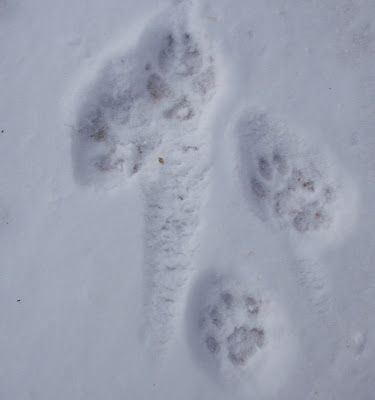 I arrived home, to find that our friendly Federal Express guy had left a package, with two dog milkbones lying atop it. I left it outside briefly while I warmed up, thinking that no one would mess with the package in a short time. Alas, I was wrong. Our friend Pepper visited and ate both milkbones! Look at the naked package behind him. 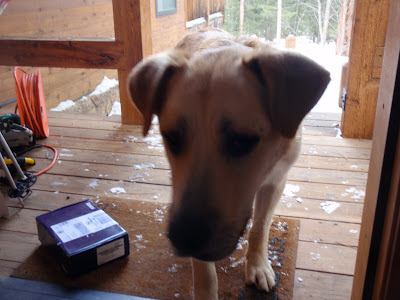 I brought him in the house and called his humans, who were unconcerned about his unsupervised wandering, to say the least. I told them about the dogs killed on our road, shot by angry horse owners, and attacked by wild animals. The owner still didn't care. I was furious beyond words, especially knowing how many people go to amazing lengths to take the best possible care of their dogs but still tragically lose them to disease or misfortune.

I became even more furious when I looked at our wildlife camera's photos from last night. First, our 'regular', the wily coyote visited. 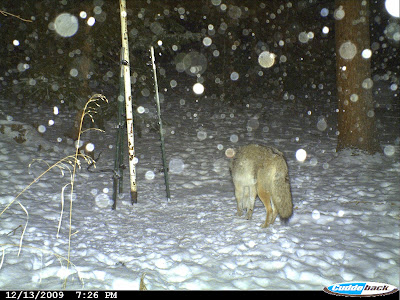 Then, Pepper and his brother both visited our birdfeeder area. 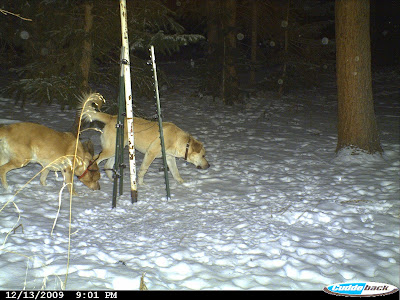 It's too common - people move from the big city to the mountains and decide that it's OK to let their dogs roam. In reality, it's against the law, and it's incredibly dangerous. My dogs and I have found the bodies of two dogs killed by wild animals on the trail network behind our house. One victim was bigger than an Akita. I told that story to the dog owner today but it elicited no response. At least, I made my views clear. There's at least a shred of hope that the family will reform.

R changed my mood before I drove down to the 'big city' for a doctor's appointment. He loves stealing items from bags and hording them, but not destroying them, on his bed. I caught him in the act of mischief. I love our grown-up puppy! Mentally, I felt much better today, like I'll figure out the right path. Part of why I felt more confident was the easing of the electric pain jolting down my leg. That pain is caused by the ruptured disc in my lower back. The fact that it's been tyrannically ruling my life has made it difficult to even think about the neck surgery, which won't address the leg pain. So, today, I felt like I was moving in the right direction. I'll figure things out.

Thanks to all of you for your emails encouraging me in general and advising me to listen to the spine experts. You're absolutely right. No one's advice should carry as much weight as theirs. However, we might have found another source of information. A peripheral acquaintance has a large part of her spine fused. I'll probably get to talk with her this weekend which will help me address my fears about the limitations imposed by having so much of my spine fused.

For now, I'll seize the day like a dog playing in the snow! 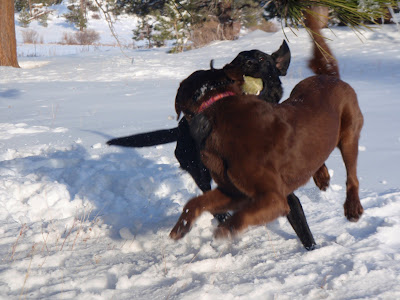